In Table 1, the 51 most populous cities in the U.S. are ranked according year-over-year jobs growth (fastest to slowest) and unemployment rates (lowest to highest). 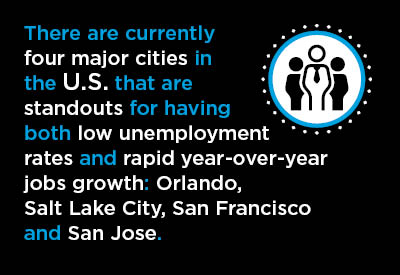 With respect to labor markets, there is a Top Tier of cities comprised of Orlando, Salt Lake City, San Francisco, and San Jose. Each of those urban centers has a ranking within the best dozen for both year-over-year jobs increase and unemployment rate (U).

San Jose and San Francisco are where the bright young people go to work for some of the established giants in the digital field and for venture capital start-up firms. Orlando is a draw for employees in the theme park entertainment industry and for aerospace engineers and technicians commuting to launch sites on the nearby Atlantic Coast.

A Second-Best Tier for Hiring and Jobless Rates

There is a second-best tier of cities comprised of Dallas-Ft. Worth, Miami, Tampa, and Austin. Each of those cities is among the elite dozen according to one criterion but falls a little short in the other.

In the analysis so far, four cities in Florida have been mentioned and two each in Texas and California.

Based on not seasonally adjusted (NSA) data. / Cities are metropolitan statistical areas (MSAs).
When the ranking numbers are the same, the cities are in a tie.

The U.S. has over 50 cities with populations of a million or more each. Canada has only six ‒ Toronto, Montreal, Vancouver, Calgary, Edmonton, and Ottawa-Gatineau. Therefore, a listing of Canada’s major urban centers includes smaller agglomerations.

The modest base sizes of many Canadian census metropolitan areas (CMAs) can lead to outsized percentage swings in jobs creation ‒ for example, Brantford’s +18.5% climb in employment year over year in July.

Brantford’s increase in nominal terms was +13,000 jobs y/y, spread among numerous industrial sectors. Next-door neighbors Brantford and Guelph have been numbers one and two in jobs creation and they are situated slightly west of Toronto, where a hotbed of high-tech activity ‒ aiding in the production of auto parts, solar panels and communications devices ‒ has sprouted.

Sudbury is famous for its nickel and copper mining and the price of the former has been soaring, to a five-year high, since Indonesia announced that it would be banning export of its output beginning in January 2020.

Of the eight Canadian cities mentioned above, a majority (5) are in Ontario.

Based on averages of latest three months, seasonally adjusted (SA) data. Cities are census metro areas (CMAs).
When the ranking numbers are the same, the cities are in a tie.

The 5 U.S. and 3 Canadian Cities With Best Jobs Markets Read this Blog Post