After managing only weak ‘real’ (i.e., after adjustment for inflation) gross domestic product (GDP) growth in the final quarter of last year and the first quarter of this year, Canada’s economy shifted into a higher gear during the latest three months. 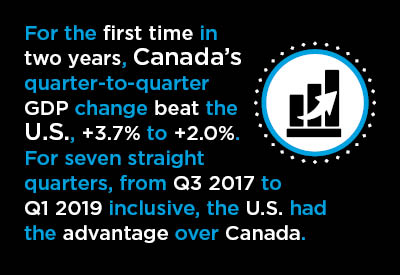 The boost to growth in Q2 came mainly in foreign trade, as exports of goods and services were +13.4%, while imports retreated by -4.0%. Energy products led the export strength.

In Canada, household spending in this year’s second quarter advanced by a tepid +0.5% annualized. Nevertheless, consumer spending as a share of GDP has crossed above the halfway point. In 2018, for the entire year, it was 56.6% of GDP and in Q1 and Q2 of this year, it has been 56.9% and 56.5% respectively.

U.S. GDP Outlook in the Hands of Consumers

U.S. quarter-to-quarter GDP growth in this year’s Q2 eased to +2.0% from +3.1%, according to the most current estimate from the Bureau of Economic Analysis (BEA). In the U.S., as opposed to Canada, however, the consumer stayed much more active. Personal Consumption Expenditures (PCE) in the U.S. in Q2 were +4.7% annualized.

U.S. exports of goods and services in the latest quarter were -5.8% annualized, as the trade war with China is exacting a toll.

When analysts are asked about the likelihood of an imminent U.S. recession, the answer they often give is that it all depends on ‘the consumer.’ Foreign trade has been in retreat and capital spending has not lived up to expectations. The advance guard carrying the economy forward consists almost entirely of individuals continuing to keep their wallets and purses open.

An Alternative Leading Indicator of Recession

Heightened speculation concerning a recession has been fueled by the inversion of the yield curve. Long-term interest rates have fallen below short-term rates. Historically, such an occurrence in financial markets has signaled a slowdown.

In the context of the economy’s dependency on consumer spending, however, there is another yardstick that warrants a great deal of attention as well—the weekly (i.e., released every Thursday morning) initial jobless claims number.

The buoyancy of the U.S. economy over the past ten-years-plus has been mirrored by the gradual decline in ‘initial jobless claims’ (see Graph 4). Jobs and income growth have facilitated national output growth.

As soon as a deterioration or reversal in the initial jobless claims numbers becomes apparent,—for example, once they start heading back towards 250,000 or 300,000—then the prospects for continuing healthy GDP growth will be dealt a significant blow.