For the World Economy to Heal, Foreign Trade Must Pick Up

While it has become the case that consumer spending now accounts for, by far, the major portion of U.S. gross domestic product (GDP), at 70%, foreign trade does still play an important role. Unfortunately, that role ‒ because it is a net figure of a smaller export number minus a bigger import number ‒ is currently a negative or repressive one. 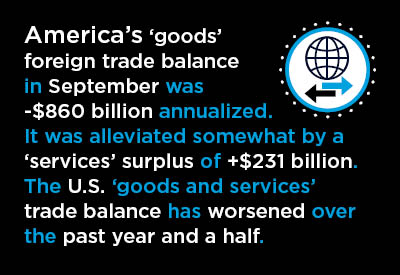 Net foreign trade is a line item in GDP. Fronted by a ‘minus’ sign (-), it detracts from the total. GDP would be much higher if the trade balance was closer to zero, let alone if it was strongly positive.

The problem originates in ‘goods’ trade rather than ‘services’ trade. America’s ‘goods’ foreign trade balance in September was -$860 billion annualized. It was alleviated somewhat by a ‘services’ surplus of +$231 billion.

Graph 1 shows a ‘goods and services’ trade balance that has worsened over the past year and a half and is now in depths close to what was being experienced from 2006 to 2008, immediately before the Great Recession.

Particularly concerning is the fact that trade deterioration has occurred even as restrictive trade measures, in the form of tariff barriers on imports, have been set in place. Clearly, this strategy has not been working.

The last data point is for September 2019.
Based on seasonally adjusted monthly figures, projected at an annual rate.

An End in Sight to U.S.-China Trading Tiff?

Projections of world economic growth are being revised downwards, with the increased presence of restrictive trade measures sourced as a primary cause. Two export-dependent nations, China and Germany, are displaying economic weakness, with growth slowing significantly in the former and flatlining in the latter.

When major economies falter, unfortunate ripple effects are felt everywhere. Other nations, especially ones with large natural resource sectors, are unable to realize their full potential due to languishing demand for and prices of commodities.

America’s trading relationship with China has taken numerous interesting turns of late. For several months in the spring of this year, the proportion of the U.S. ‘goods’ trade deficit that was tied to China dropped below 40%. More recently, however, it has risen again. In September it was 43.8% (Graph 2).

The Trump Administration and China’s government have announced a first-phase agreement to ease their trade tensions. Stock markets have reacted with glee. But this game has been played before. Are circumstances truly different now as opposed to previous occasions?

Will the recent positive pronouncements lead to lasting progress? The likelihood does seem greater. Neither the U.S. nor China can afford a prolongation of their trading tiff.

Graph 3 makes clear that most of the U.S. trading shortfall in motor vehicles and parts is with just two countries, Mexico and Japan. As a proportion of the combined negative figure from all countries with which the U.S. is running an auto sector deficit, Mexico’s share is 43.8%.

Then there’s Canada. The Canadian auto sector often came under fire from Washington and was threatened with U.S. tariffs during the tough negotiations leading up to the new USMCA pact to replace NAFTA.

Graph 3 asks, “What was all the fuss about?” The U.S. is currently running a slight surplus in its motor vehicle and parts trade with its northern neighbor.

Provisions within the USMCA should reduce the trading disparity between the U.S. and Mexico in the auto sector. Interestingly, Mexico, among the three signing nations, is closest to ratifying the new trading arrangement.

Oil No Longer the Culprit in U.S. Foreign Trade Woes

Consumer goods and auto-related products have been the main areas where the U.S. is encountering its steepest exports-to-imports shortfalls. Surprisingly absent is oil.

The U.S. economy used to be hugely dependent on foreign crude. In the ‘old days,’ U.S. oil imports, especially from OPEC, and specifically from the Middle East, were enormous.

But in the mid-00s, U.S. oil imports reached their peak (Graph 4) and they’ve been declining dramatically ever since. They’re presently down by about one-third from their all-time high.

Through tapping new reserves, most notably in shale rock, America’s own domestic supplies of oil and natural gas have been greatly expanded. Conservation efforts have also been critical in reducing the U.S. need for outside sources of energy.

"19 Ytd Ann" is 2019 year to date annualized. Other major sources not shown include Mexico, Colombia, Russia and Brazil. Individual country data is not available prior to 1993.

One country stands out for surviving the downdraft. U.S. year-to-date oil imports from Canada are +5.9%. Canada’s share of the U.S. import total has climbed above half to sit at 55.0% (Chart 6). Second-place Mexico and third-place Saudi Arabia are far back, at 8.7% and 7.7% respectively.

America has become an international energy powerhouse, with more thought being given to export potential than import concerns. Several of the largest construction projects being carried out in the nation at this time ‒ e.g., Golden Pass LNG export terminal in Texas ($10 billion) and Calcasieu Pass LNG project in Louisiana ($4.5 billion) have foreign customers foremost in mind.

In the current climate of lessened expectations concerning foreign trade, some states have fared more poorly than others. There have also been some others that have managed to still do okay.

Graph 7 ranks states by their export sales, year-to-date in 2109 compared with the same January-to-September period of 2018.

After frontrunner Texas (+4.9%), ‒ which owes its uptick mainly to exports of energy products, but also to ‘aircraft/spacecraft’ products ‒ the next eight states have all experienced declines.

Among the eight states with year-to-date declines, the one beaten up the most has been Washington, -22.2%. Washington’s export difficulties are primarily to be found in the ‘aircraft/spacecraft’ sector.

Production at Boeing’s Washington plant has been adversely affected by the U.S.-China trade conflict. Beijing is Boeing’s biggest foreign buyer. Moreover, longer than expected delays in obtaining recertification for the company’s accident-prone 737 Max jet have hindered sales to airlines based in other corners of the world.

The result for one other state pops out in Graph 7, South Carolina’s +21.7%. The surge in South Carolina export sales has come in ‘aircraft/spacecraft,’ +82.5%, with a hearty assist from ‘vehicles,' +13.3%. Boeing Co. has a Charleston plane-making campus and BMW in Spartanburg has produced the most vehicles for export among all U.S. car plants since 2014.

In nominal dollars, Texas ($244 billion through 2019’s Q3) leads all states for export sales by a vast margin. Even next-place California ($129 billion) has only a little more than half of the volume generated by Texas. Then it’s another big step down to third-ranked New York ($55 billion).

From Graph 8, Canada’s foreign trade difficulties also appear entrenched and serious. Prior to the recession, Canada consistently ran a sizable surplus. Since the recession, the nation’s merchandise trade balance has registered almost nothing but deficits.

Weak commodity prices resulting from underperforming global trade have placed a straitjacket on how well Canada’s economy can perform.

It would be ungracious for Canadian crude producers to complain about the share of U.S. oil imports they are being allotted. Chart 9 spotlights that their share of U.S. total oil imports has risen from just under 15% in 2000 to 55% at present. Meanwhile, OPEC’s share has diminished from 50% to 22.5%.

Furthermore, the number of barrels of Canadian oil shipped across the border, now often by railcar, has been climbing steadily ‒ a positive development independent of price.

Nevertheless, for much of Canada’s investing community, the prospect of shipping more oil south through the proposed northern portion of the Keystone XL pipeline and/or Enbridge’s Line 3 is tantalizing. But enthusiasm must be restrained by the realization that all such endeavors, these days, inevitably face delays and sidelining by protests and court challenges.

The Trans Mountain oil pipeline expansion from Edmonton, Alberta to Burnaby, B.C. is set to get underway, but only time will tell if it can successfully navigate the ‘rapids’ posed by ongoing native land claim issues and the disapproval of environmentalists.

The last data point is for September 2019.
Based on seasonally adjusted monthly figures, projected at an annual rate.

Graph 10 focuses attention on Canada’s key export products by province of origin. The horizontal bars record percentage changes, either positive or negative, for year-to-date 2019 over year-to-date 2018.

The biggest percentage increases, both in double digits, have been registered by ‘metals and minerals’ (i.e., potash) from Saskatchewan, +12.3%, and ‘consumer goods’ from Ontario, +10.9%.

By dollar volume, the two most important provincial export categories are ‘energy products’ from Alberta and ‘motor vehicles and parts’ from Ontario. The former is currently +1.6% and the latter, +2.3%.

The right-hand side of Graph 11 shows total export sales to date this year versus January-September of last year for each province. The four winners are Prince Edward Island, +10.6%; Nova Scotia, +6.2%; Manitoba, +5.4%; and Ontario, +4.0%.

One province is ‘punching’ way above its weight in exports relative to its population, Alberta (21.8% for exports to 11.6% for population).

To improve its export game, the government of Quebec wants to sell more electricity to American northeastern states.

B.C.’s hopes for more export sales are heavily tied to creation of LNG terminal facilities near Kitimat along the province’s Pacific Coast.

'Current' $s are unadjusted for inflation (i.e., as opposed to 'constant' $s).

The Reality of U.S. Foreign Trade – In 6 Graphs Read this Blog Post