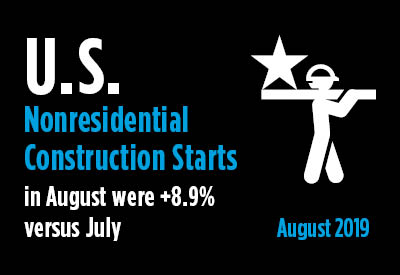 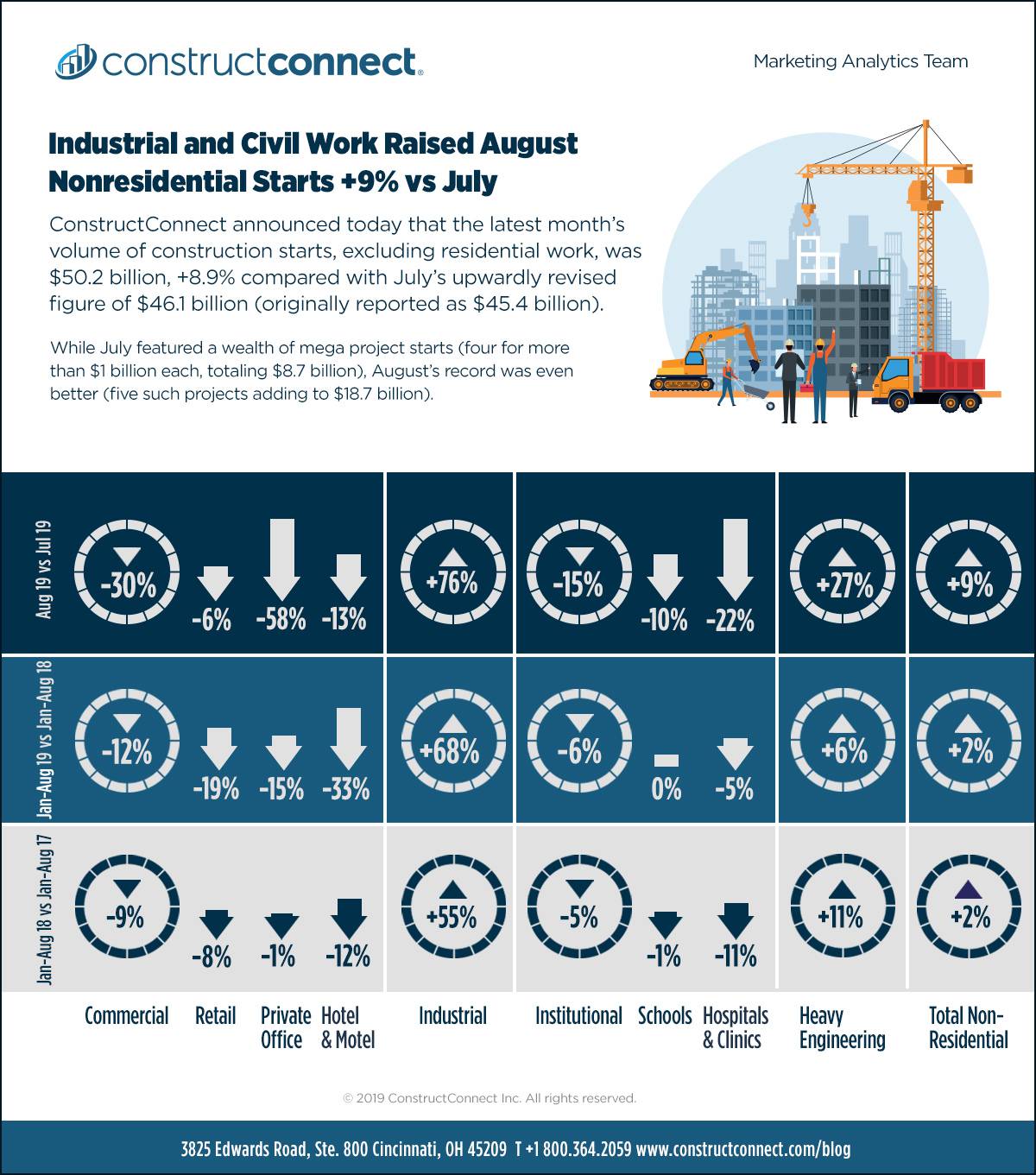 ‘Smoothed’ grand total starts, which include residential activity, were -3.6% in August. Residential activity has been -10.1% on a 12-month moving average basis, with multi-family starts (-17.2%) leading the descent more precipitously than the single-family (-6.8%) market.

The ‘starts’ figures appearing in this report’s tables and graphs are not seasonally adjusted (NSA). Nor are they altered for inflation. They are expressed in what are termed ‘current’ as opposed to ‘constant’ dollars.

‘Nonresidential building’ plus ‘engineering/civil’ work accounts for a larger share of total construction than residential activity. The former’s combined proportion of total put-in-place construction in the Census Bureau’s latest report, for July, was 59%; the latter’s was 41%.

M/M, Y/Y, and YTD Results―Boosts from Transport and Power Projects

August’s +8.9% climb in total nonresidential starts month-over-month (m/m) was driven by industrial (+75.6%) and heavy engineering/civil (+27.4%) work, as commercial (-30.2%) and institutional (-15.4%) dropped back. As set out in the Top 10 list, projects initiated by ExxonMobil and Fiat Chrysler boosted industrial work in the latest month and engineering was lifted by railroad and rapid transit work, as well as electric power projects to utilize wind and natural gas.

To Date in 2019, Engineering the Star Performer

Institutional starts to date in 2019 have been nearly two-thirds (63%) comprised of school/college work. Such educational facility starts in August were -9.9% m/m and -12.7% y/y, but +0.4% ytd. Medical facility starts, i.e., as the combination of ‘hospitals/clinics,’ ‘nursing/assisted living’ facilities, and ‘miscellaneous medical’ projects, have contributed one-quarter (a 25% slice) to the total for institutional so far this year. In August, health care facility starts were down across the board: -26.9% m/m; -6.6% y/y; and -17.1% ytd.

Levels and rates of job openings in the construction sector continue to be extraordinarily high (Graph 1 below), but the three-month moving averages of both have declined a bit in the past two months. The individual month of July’s figures for level and rate, at 373,000 and 4.7%, were no match for April’s peak readings of 434,000 and 5.5%. As for hires (Graph 2 below), they’re also demonstrating some hesitancy, although that may be due to a shortage of available workers.

Among the 12-month moving average trend graphs (Nonresidential Construction Starts Trend Graphs - August 2019), the heavy engineering curve continues to trend higher, while the nonresidential buildings line has stabilized at $25.0 billion, which is way up from less than $15.0 billion in the aftermath of the recession (Graph 1). Graph 2 shows institutional and commercial starts tailing off slightly of late. Retail is in steep decline, but private office buildings are maintaining momentum (Graph 3). The schools/colleges trend line in Graph 4 has managed more upwards movement than the hospitals/clinics curve. The roads/highways and water/sewage curves have both been upbeat in Graph 5. The bridges curve in Graph 6 is on a quite positive track, but no more so than ‘miscellaneous civil’ (rapid transit lines, railroad work and electricity projects), which draws its strength from mega projects.

*Rate is number of hires during month as % of construction employment.
Job Openings and Labor Turnover Survey. Latest seasonally adjusted (SA) data points are for July, 2019.

Tables B-3 and B-8 of the monthly Employment Situation report record average hourly and average weekly wages for industry sectors. B-3 is for all employees (i.e., including bosses) on non-farm payrolls. B-8 is for ‘production and non-supervisory personnel’ only (i.e., it excludes bosses). For ‘all jobs’ and construction, there are eight relevant percentage changes to consider.

From August’s BLS Table B-3 (including supervisory personnel), the ‘all-jobs’ earnings increases were +3.2% hourly and +2.9% weekly. Construction workers as a subset of ‘all-jobs’ fell behind hourly, +2.7%, but were better rewarded weekly, +3.3%. From the latest Table B-8 (excluding bosses), the all-jobs compensation gains were +3.5% hourly and +2.9% weekly. At +2.5% both hourly and weekly, nonsupervisory construction workers failed to keep up.

Some Signs of Easing in Construction Costing