ConstructConnect announced today that September's volume of construction starts, excluding residential activity, was $42.8 billion. The month-to-month percentage change versus August was an outsized +31.5% (or plus nearly one-third). The big improvement in the latest period was thanks to go-aheads for three mega projects combining for a total of $17 billion. 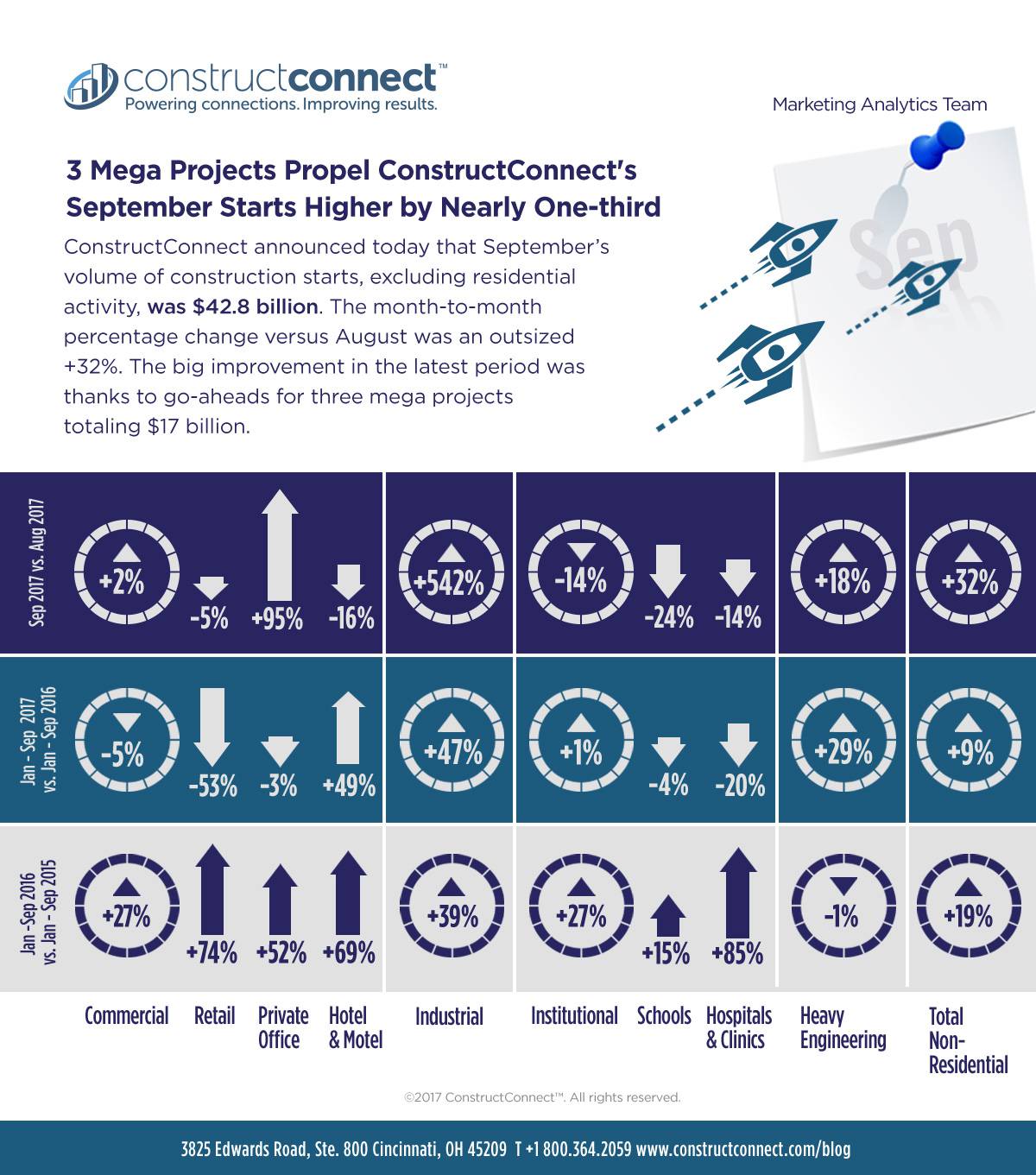 ‘Nonresidential building’ plus ‘engineering/civil’ work accounts for a larger share of total construction than residential activity. The former’s combined proportion of total put-in-place construction in the Census Bureau’s August report was 57%; the latter’s was 43%.

The total number of U.S. construction jobs rose by 8,000 in September according to the latest Employment Situation report from the Bureau of Labor Statistics (BLS). The monthly average gain in on-site jobs to date in 2017 has been a little faster than during the same January-to-September period of last year, +14,000 compared with +11,000. The NSA unemployment rate in the ‘hard hat’ sector stayed the same in September as in August, at 4.7%. A year ago, in September 2016, construction’s jobless level had been a bit more elevated, at 5.2%.

The September labor survey results, both ‘payroll’ and ‘household’, were based on conditions that prevailed nearly simultaneous with Hurricanes Harvey and Irma laying severe beatings on southern Texas and much of Florida. Rebuilding efforts during the remainder of 2017 will surely put additional pressure on labor and material supplies. U.S. year-over-year construction employment, at +2.7%, is already proceeding at about twice the pace of the nation’s total jobs performance, +1.4%. Also notable is the current strong showing of ‘architectural and engineering services’ jobs, +3.4%. Design activity points the way to subsequent work levels in the field.

The six graphs show 12-month moving average trend lines for major type-of-structure categories. The ‘retail’ and ‘private office building’ curves have been heading down sharply for a considerable while now. ‘Schools/colleges’ and ‘hospitals/clinics’ have also been descending, but with more decorum. Some of the engineering subcategories, though, have been displaying resilience, with ‘bridges’ soaring and ‘miscellaneous power’ returning to a steady position.

Worker compensation throughout the U.S. economy appears to be gradually climbing. From Table B-3 of the latest BLS Employment Situation report, both average hourly and average weekly earnings for all jobs rose by +2.9% y/y in September. Construction workers fared better, but only by the tiniest of degrees, +3.0% both hourly and weekly. Leaving out supervisory personnel (i.e., Table B-8), the economy-wide increases were +2.5% both hourly and weekly. Construction workers achieved the same weekly, +2.5%, but had happier results hourly, +3.1%.