ConstructConnect announced today that January’s level of U.S. construction starts, excluding residential activity, was $24.6 billion, a decrease of 9.1% versus the dollar volume in the period before. The month-to-month drop was almost an exact match for the usual December-to-January decline of -8.5%. Due to harsh winter weather – which is another way of saying ‘seasonality’ - January is traditionally the worst month of the year for construction groundbreakings or starts. 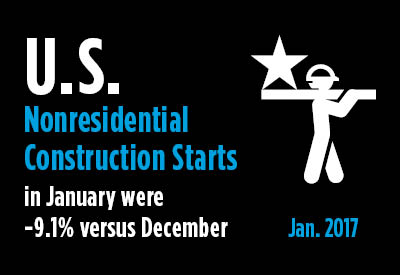 ‘Nonresidential building’ plus ‘engineering/civil’ work accounts for a considerably larger share of total construction than residential activity. The former’s combined proportion of total put-in-place construction in the Census Bureau’s December report was 61%; the latter’s was 39%.

Jobs in the construction sector in January 2017 rose by a quite healthy +36,000 month to month, according to the latest Employment Situation Report from the Bureau of Labor Statistics (BLS). Throughout 2016, the monthly average change in construction payrolls was a more restrained +12,000. On a year-over-year percentage change basis, U.S. construction activity has most recently accounted for a fieldwork uptick of +2.6%, which beats the economy-wide improvement of +1.6%.   The construction sector’s NSA unemployment rate in January of this year, however, at 9.4%, was a deterioration from January 2016’s figure of 8.5%.

There are two other data series with close ties to construction appearing in Table B-1 of the monthly Employment Situation Report. As a ‘leading’ indicator, – i.e., before there can be field activity, projects must be rendered into working drawings by design professionals − the total number of jobs in architectural and engineering services in January 2017 was +2.2% year over year.  As a ‘coincident’ indicator, the total number of positions at retail outlets specializing in selling building materials and supplies was +2.0% year over year in 2017’s first month.

January’s month-to-month setback in total starts (-9.1%) originated in the commercial (-14.4%) and heavy engineering/civil (-12.3%) type-of-structure categories. Moving in the opposite direction, institutional starts recorded a nice pickup, +6.3%. Smaller-dollar-volume industrial work was down by almost half, -46.8%, but this is a category that can display a wide percentage swing in any given month depending on the presence or absence of a mega project or two.

For eleven of the 12 months of the year, the write-up for this Industry Snapshot would now go on to discuss year-to-date results. In every January period, however, there is equivalency (i.e., there is no difference) between the individual monthly results and the year-to-date numbers.

Within the commercial category of construction in January 2017, the ‘miscellaneous’ designation claimed the biggest share, at 30%. The catch-all subcategory of commercial is mainly made up of transportation terminals and sports arenas. In the latest month, ‘miscellaneous commercial’ was +516.3% month over month (m/m) and +240.4% year over year (y/y). Large arena projects in Fort Worth and San Francisco are featured among the Top 10 Projects of this Industry Snapshot.

‘Private office buildings’ and ‘government office buildings’ claimed the next largest slices of commercial work in the latest month, at 12% and 13% respectively. Note that the combination of the two, adding up to 25%, made ‘total offices’ a bigger player in commercial than ‘retail’.

Heavy engineering/civil starts obtained nearly half (45%) of their total from ‘road/highway’ work in January. In the latest month, the volume of street starts was -5.0% m/m and -15.7% y/y.

Next most important in the engineering category of construction is ‘water/sewage’ work, which took a nearly one-quarter share (22%) in January, after being -34.1% m/m and -23.0% y/y.

Thankfully, the institutional category of starts was able to provide some rays of sunshine in the latest period. The ‘school/college’ subcategory − with an outsized contribution to total institutional of 62% − was +14.6% m/m and +18.9% y/y. ‘Hospital/clinic’ groundbreakings – accounting for 14% of total institutional starts – were +55.5% m/m, but -31.1% y/y.

The 12-month moving average trend graphs highlight upward movement in ‘total commercial and ‘school/college’ starts. Unfortunately, though, there are more categories with slopes that are descending. Type-of-structure categories that have been tailing off include: ‘total institutional’, ‘retail’, ‘private office buildings’ and especially ‘miscellaneous civil’.

With respect to the national income data recorded in the latest Employment Situation Report, on-site workers in the construction sector realized gains that exceeded all-jobs averages. Including supervisory personnel, January 2017 year-over-year earnings by all workers in the economy were +2.5% hourly and +1.9% weekly. The construction contingent fared better at +3.2% and +2.2% respectively. Among only production and nonsupervisory personnel (i.e., leaving out bosses), all-jobs earnings were +2.4% hourly and +2.1% weekly. More bullish hard hat earnings climbed above the significant +3.0% benchmark, registering +3.5% hourly and +3.1% weekly.

ConstructConnect has now moved to a better-targeted and research-assigned ‘start’ date. Prior to this latest month, January 2017, the ‘start’ date was recorded as occurring within 30 to 60 days of the announced bid date. In concept, a ‘start’ is equivalent to ground being broken for a project to proceed. If work is abandoned or re-bid, the ‘start’ date is updated to reflect the new information.