A Second Month of Construction Starts Weakness Early in 2019

ConstructConnect announced today that February's volume of construction starts, excluding residential work, was $23.7 billion, a drop of 18.2% compared with January and a decline of 11.7% versus February 2018. Year-to-date nonresidential starts through the first two month of 2019 have been -14.8% relative to January-February 2018. Among type-of-structure categories, the most evident weakness in groundbreakings has occurred in ‘private office buildings.’ 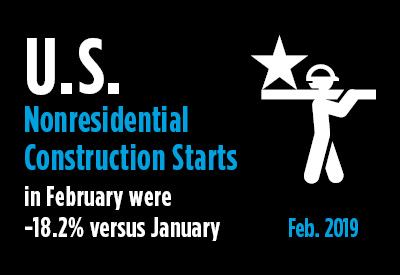 This year’s February starts relative to the prior five-year average for February, from 2014 through 2018, was also disappointing, -14.7%. The usual adjustment in the starts volume from January to February, due to seasonality (i.e., harsh winter weather), has been -3.5%.

The ‘starts’ figures throughout this report are not seasonally adjusted (NSA). Nor are they altered for inflation. They are expressed in what are termed ‘current’ as opposed to ‘constant’ dollars.

‘Nonresidential building’ plus ‘engineering/civil’ work accounts for a larger share of total construction than residential activity. The former’s combined proportion of total put-in-place construction in the Census Bureau’s latest report, for December, was 60%; the latter’s was 40%.

ConstructConnect’s construction starts are leading indicators for the Census Bureau’s capital investment or put-in-place series. Also, the reporting period for starts is at least one month ahead of the reporting period for the investment series. At this time, the Census Bureau has particularly fallen behind and is playing catch-up because its statisticians were sidelined by the shutdown.

After a big jump in hiring in the U.S. construction sector in January (+53,000 jobs), there was a large reversal in payrolls in February (-31,000), according to the latest Employment Situation report from the Bureau of Labor Statistics (BLS). February’s year-over-year change in construction jobs was still bullish, at +3.1%, but that’s well down from the post-recession peak gain of +6.1% achieved in December 2014. Also, at +3.1%, construction is no longer leading all industrial sectors for year-over-year jobs growth. That honor now goes to ‘transportation and warehousing’, +3.6%. On a cheerier note, construction’s NSA unemployment rate in February was 6.2%, down from 6.4% in January and considerably better than February 2018’s 7.8%.

February 2019’s year-over-year staffing changes in other segments of the economy important to construction were as follows: ‘machinery and equipment rental’, +8.8%; ‘oil and gas extraction’, +6.7%; ‘real estate firms’, +3.0%; ‘architectural and engineering services’, +2.9%; ‘cement and concrete product manufacturing’, +1.3%; and ‘building material and supplies dealers’, -0.4%.

The month-to-month (m/m) pullback (-18.2%) in total nonresidential starts in February resulted from widespread deterioration, with institutional (-30.9%) leading the rush downwards, followed by commercial (-22.2%) and industrial (-17.9%). Engineering (-5.9%) fell with relative decorum.

The year-to-date (ytd) nonresidential starts decline (-14.8% Jan-Feb 2019 vs Jan-Feb 2018) was caused by a significant shortfall in the commercial (-36.8%) subcategory and hesitancy in institutional (-12.5%) and heavy engineering/civil (-6.3%). Industrial managed an impressive improvement (+73.9%), thanks largely to a mega-sized project, a $1.5 billion expansion of ExxonMobil’s integrated refining operations in Beaumont, Texas.

The Nonresidential Construction Starts Trend Graphs – February 2019 sets out 12-month moving average trend graphs for key type-of-structure categories. While there continues to be a mild rising tendency in the heavy engineering curve in Graph 1, nonresidential building’s slope, after climbing aggressively from late 2012 to early 2017, has been gradually losing steam for over a year. From Graphs 3 and 4, it’s evident that retail, private office buildings and hospitals have been sapping strength from nonresidential building’s overall starts dollar volume. As for civil (Graphs 5 and 6), support has come from roadwork and bridges.