ConstructConnect announced today that October’s level of U.S. construction starts, excluding residential work, was $29.5 billion, a surprisingly nice surge of +15.1% versus the level in the period before. Usually between September and October there is a -4.0% drop due to seasonality. 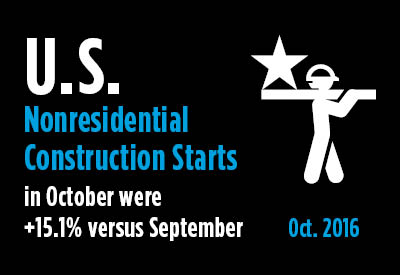 During the 12 months of the year, the month-to-month tendency, due to seasonality (i.e., weather patterns), is positive in March through July, then negative in August through February.

October of this year compared with October of last year was +11.0%. The volume of year-to-date starts in 2016 versus the same January through October time frame of 2015 has been +8.8%.

‘Nonresidential building’ plus ‘engineering/civil’ work accounts for a considerably larger share of total construction than residential activity. The former’s combined proportion of total put-in-place construction in the Census Bureau’s September report was 60%; the latter’s was 40%. 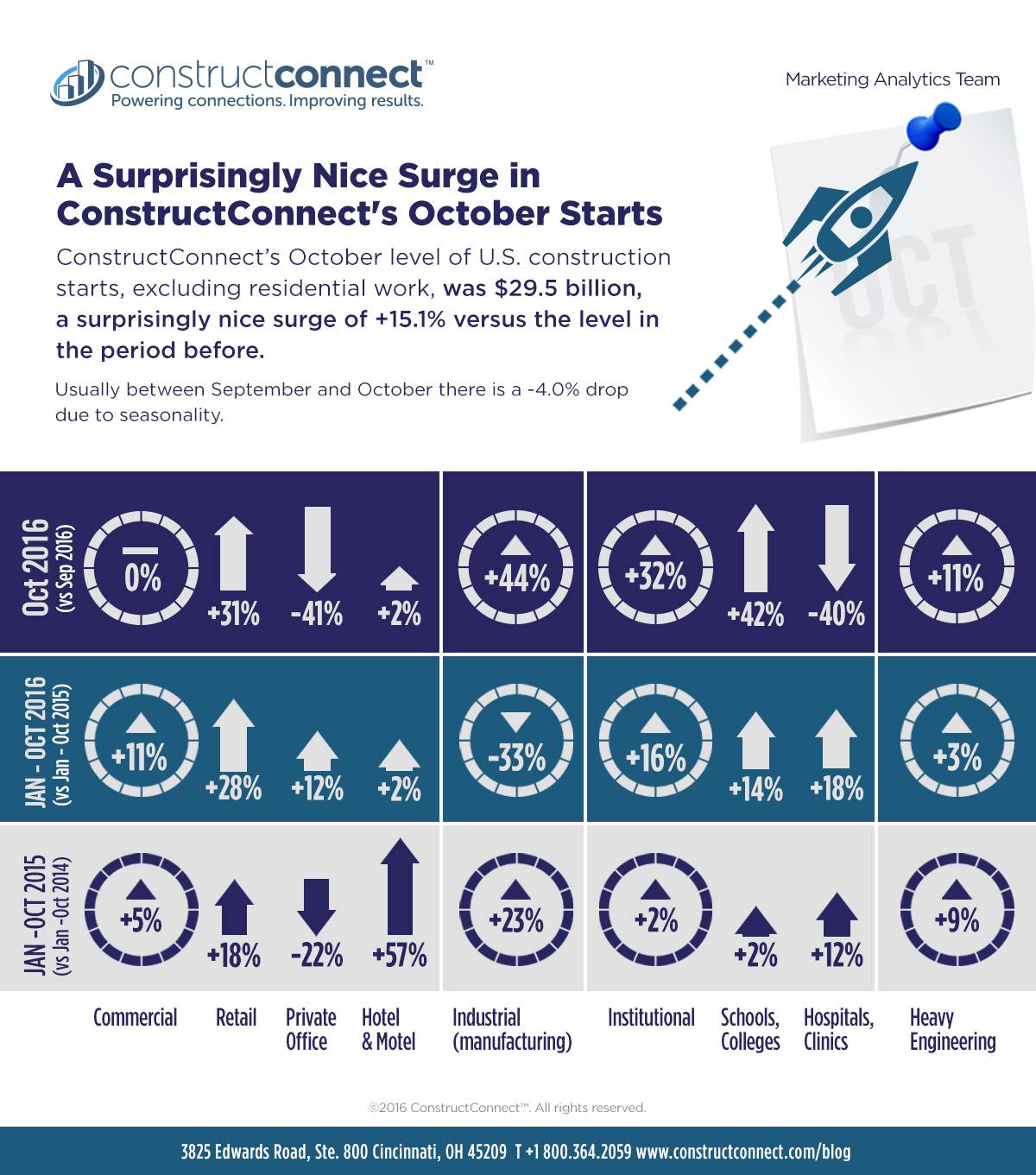 In October, the total number of jobs in the U.S. construction sector rose by a modest +11,000, according to the latest Employment Situation Report from the Bureau of Labor Statistics (BLS). The average monthly climb so far this year has been only +8,000, which compares unfavorably with the +18,000 advance per month during the first ten months of 2015. But the year-over-year jump in employment in construction, at +3.0%, has been considerably faster than for grand total jobs, +1.7%, and has beaten all other major industrial subcategories. Second place has been a tie between ‘professional and business services’ and ‘education and health services’, both at +2.7%.

There are two other data series with close ties to ‘hard hat’ activity that appear in Table B-1 of the monthly Employment Situation Report. As a ‘leading’ indicator, – i.e., before there can be field activity, projects must be rendered into working drawings by design professionals − the total number of jobs in architectural and engineering services in October was +1.7% year over year (i.e., the same as for grand total jobs). And as a ‘coincident’ indicator, the total number of positions at retail outlets specializing in selling building materials and supplies was +4.0%.

Construction’s October unemployment rate this year was 5.7%, down from 6.2% 12 months ago.

The +15.1% month-to-month increase in total nonresidential starts in October resulted from a big gain in the institutional type-of-structure category (+31.5%) and a decent bump in heavy engineering/civil work (+11.3%). Industrial contributed a large percentage burst (+43.6%), but it’s a smaller volume category and often displays wide swings in any given month depending on whether or not there have been groundbreaking efforts on a mega project or two. The important type-of-structure subcategory of commercial work was flat (0.0%) month to month in October.

Delving deeper into the year-to-date statistics, ‘school/college’ starts account for the largest slice (a 59% share) of institutional work. October was a good month for educational facility starts: +42.0% month over month (m/m); +35.9% year over year (y/y); and +13.9% year to date (ytd).

Table 2 on reorders and provides more detail on some of the type-of-structure categories in Table 1. The reasons for this ‘second view’ are set out in the footnote.

Among the 12-month moving average trend graphs, ‘schools/colleges’ and ‘bridges’ have been most clearly moving higher of late, while ‘roads/highways’ and ‘water/sewage’ are trying to attain some lift. ‘Retail’ was skyrocketing, but has more recently suffered a setback. ‘Private office buildings’ and ‘miscellaneous power’ have taken turns for the worse.

Construction’s sharp compensation increases of +5.0% and more year over year in September’s Employment Situation Report all but disappeared in October’s update. Including supervisory personnel, average hourly earnings for all jobs was +2.8% y/y. Construction did somewhat better at +3.2%. With respect to average weekly earnings, however, construction fell behind at +2.4% versus +2.5%. Omitting bosses, average hourly earnings throughout the economy were +2.4%, whereas they were +3.3% for the ‘hard hat’ contingent. But with respect to average weekly earnings, once again construction lost ground, only +1.1% compared with +2.1%.

Click here for the Top 10 featured construction projects in the U.S. - October 2016.