ConstructConnect today announced that August’s volume of construction starts, excluding residential activity, was $28.7 billion. The month-to-month performance was -9.8%, a somewhat steeper decline than the usual July-to-August change, due to seasonality, of -3.5%. 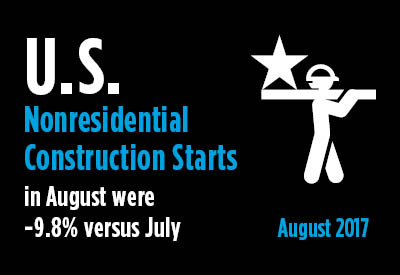 Year-to-date starts through the first eight months of 2017 are still slightly ahead of where they were for the same January-to-August period of 2016, +1.6%.

‘Nonresidential building’ plus ‘engineering/civil’ work accounts for a larger share of total construction than residential activity. The former’s combined proportion of total put-in-place construction in the Census Bureau’s July report was 56%; the latter’s was 44%. 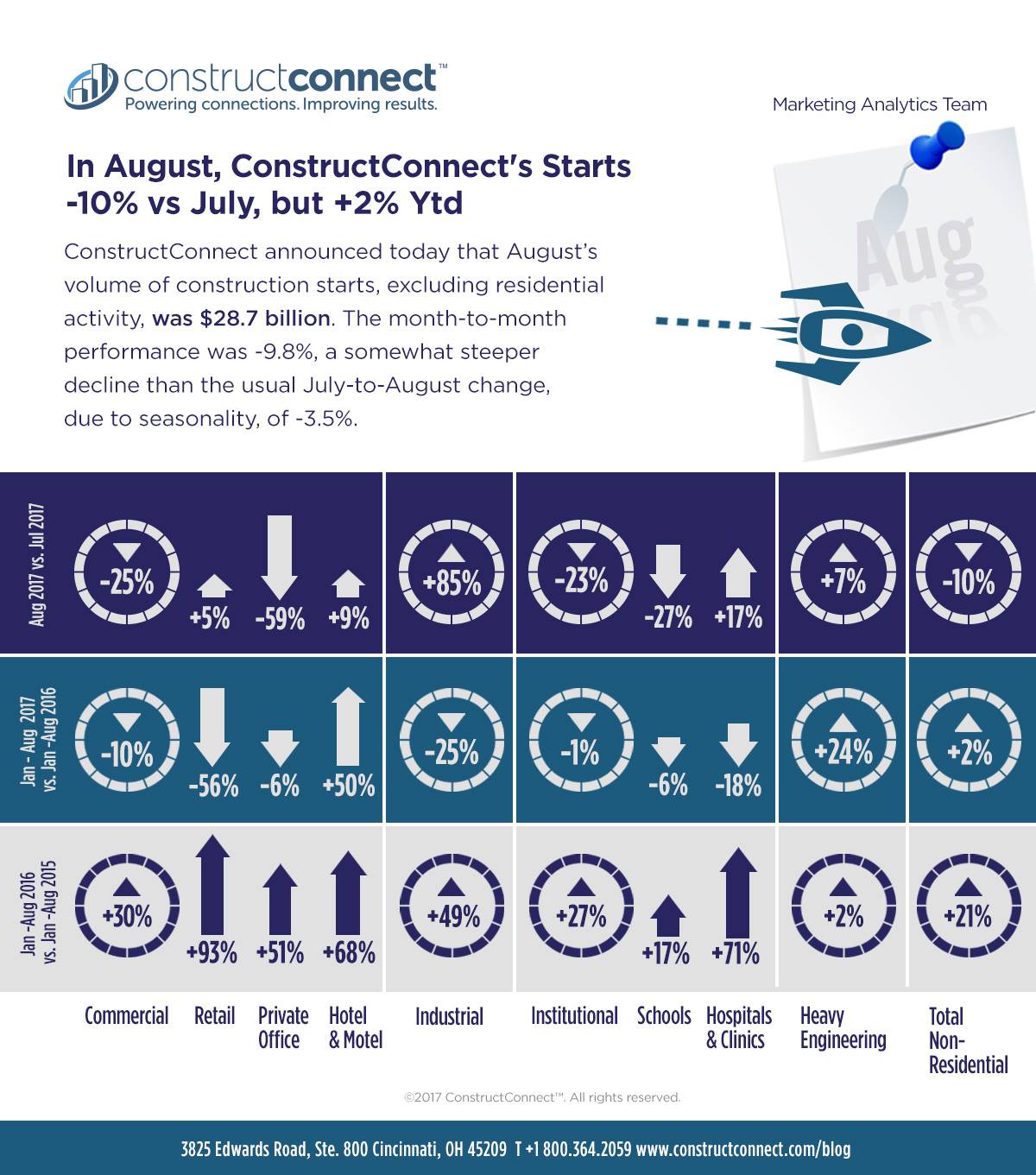 According to the latest Employment Situation report from the Bureau of Labor Statistics (BLS), the total number of jobs in the U.S. construction sector rose by +28,000 in August. The monthly average increase so far in 2017 has been +17,000, nearly double 2016’s +9,000 for the same time frame. The NSA unemployment rate in construction has dropped to 4.7%. A year ago, it was 5.1%. Rebuilding efforts in the Houston area and throughout Florida, after the painfully severe touch-downs of Hurricanes Harvey and Irma, are sure to increase the demand for construction workers. The year-over-year climb in the number of construction jobs in August, at +3.2%, was already more than double the rate of increase for all employment in the economy, +1.4%.

Payroll improvements in two other sectors also suggest further pickups in on-site building work. Hiring by ‘architectural and engineering services’ firms in August was a robust +3.7% year over year. Additionally, employment with ‘machinery and equipment rental firms’ moved from being flat year over year at the beginning of 2017 to an advance of +7.1% in the most recent month.

August’s month-to-month (m/m) starts decline (-9.8%) was caused by a drop of one-quarter (-25.0%) in commercial work and an almost equally harsh contraction in the institutional (-22.7%) category. Engineering starts (+6.8%) managed a moderate pickup, while industrial (+85.1%) nearly doubled. The gain in manufacturing, however, was on top of a relatively low base.

Table 2 this report reorders and provides more detail on some of the type-of-structure categories in Table 1. The reasons for this ‘second view’ are set out in the footnote.

Nonresidential building is currently heading down more aggressively than heavy engineering is shifting up. ‘Retail’ and ‘private office’ buildings have taken notably wrong turns. ‘Schools/colleges’ and ‘hospitals/clinics’ have also been losing traction. Moving in the opposite direction, have been ‘roads/highways’, ‘miscellaneous civil’ (e.g., pipelines) and ‘bridges’.

Table B-3 of August’s Employment Situation report from the BLS records gains of +2.5% y/y and +2.8% y/y in average hourly and average weekly earnings for all workers (including supervisors) in the U.S. economy. Construction personnel fared better at +2.7% and +3.2%.

Table B-8 of the same report, for production workers only (i.e., omitting bosses), sets out earnings advances of +2.3% hourly and +2.6% weekly economy-wide. Those employed specifically in construction, however, received half a percentage point more hourly, +2.8%, and a full percentage point more weekly, +3.6%.