ConstructConnect announced today that February starts, excluding residential activity, nearly held their own versus an upwardly revised January. The latest month’s level of $26.2 billion was only -1.7% compared with the volume in the month before. 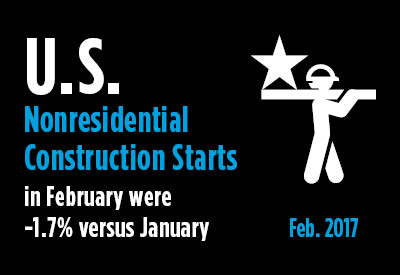 Throughout the long-term history of the starts, there has been a typical drop – due to weather-related factors − of -2.5% between January and February. Harsh conditions in winter can put a halt to field work. February, however, is the last in a string of months during which starts tend to decline period-to-period on account of seasonality. From March through July, the tendency is for starts to pick up from one month to the next.

‘Nonresidential building’ plus ‘engineering/civil’ work accounts for a considerably larger share of total construction than residential activity. The former’s combined proportion of total put-in-place construction in the Census Bureau’s January report was 60%; the latter’s was 40%. 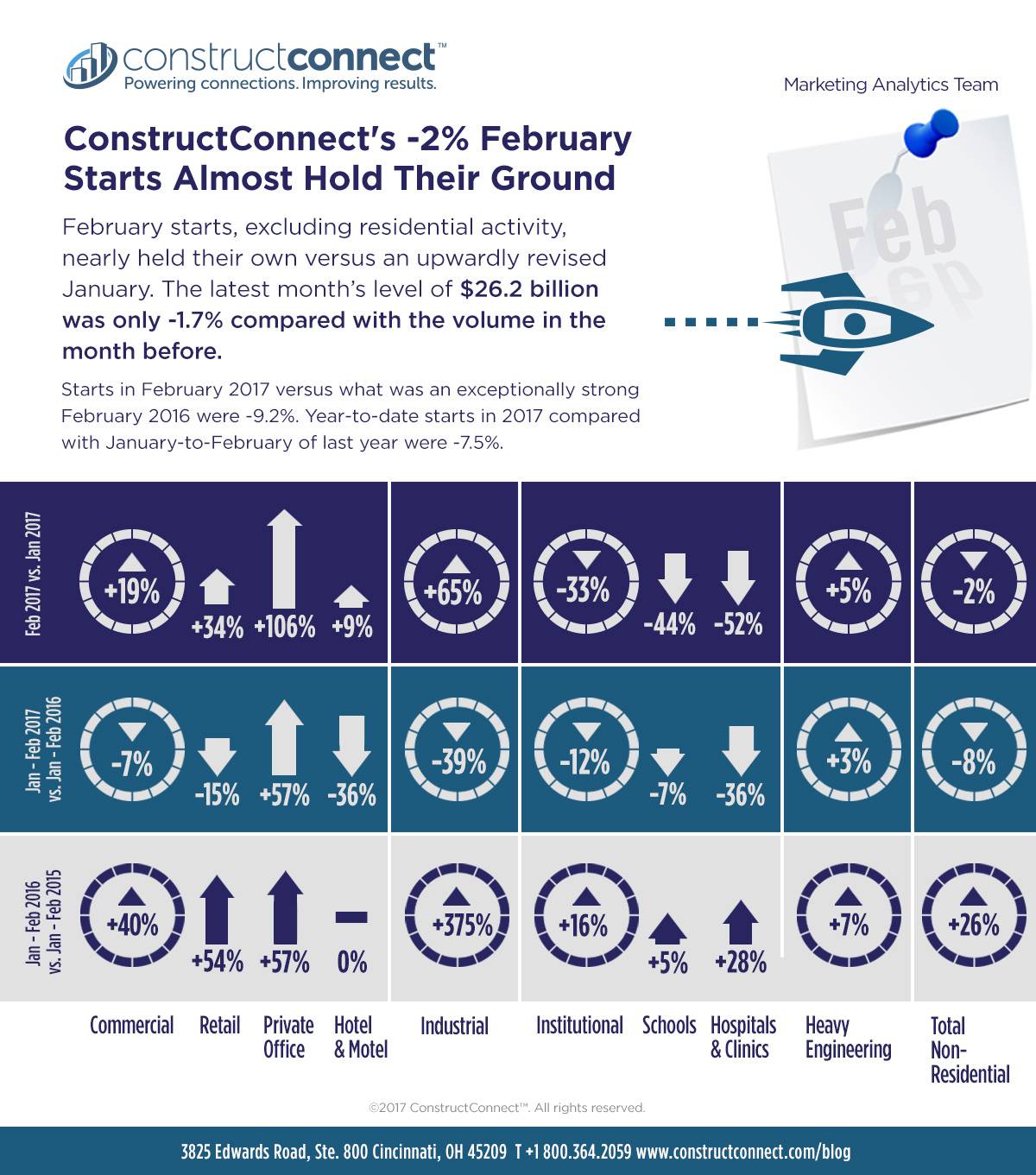 According to February’s Employment Situation Report from the Bureau of Labor Statistics (BLS), there has been a surge in the number of construction jobs early in 2017. The month-to-month increase so far this year has averaged +48,000, beating the +17,000 for January and February of last year. Year-over-year employment in construction is presently +3.3%, which is a rate of gain more than twice as fast as for all positions in the economy, +1.6%. Most other industrial sectors have not been keeping up to the same degree. Manufacturing employment, for example, has been essentially even, +0.1%. The current NSA unemployment rate for the U.S. construction sector is 8.8%, which is about on a par with the 8.7% level of 12 months ago.

There are two other data series with close ties to construction appearing in Table B-1 of the monthly Employment Situation Report. As a ‘leading’ indicator, – i.e., before there can be field activity, projects must be rendered into working drawings by design professionals − the total number of jobs in architectural and engineering services in February 2017 was +2.3% year over year.  As a ‘coincident’ indicator, total staffing at retail outlets specializing in selling building materials and supplies was +1.7% year over year in 2017’s second month.

February’s small step-back in starts (-1.7%), month-to-month (m/m), originated entirely in the institutional type-of-structure category, -33.2%. Heavy engineering/civil starts were up a modest +4.5% and commercial work charged ahead by a more substantial +18.7%. The smaller-volume-category of industrial, which can display considerable volatility brought on by the presence or absence of a mega project or two, was +65.3%.

As for February 2017 relative to February 2016 (y/y), the prevalence of percentage declines was more widespread. Industrial was -47.3%; institutional -26.4%; and commercial, -13.4%. Engineering alone among the major type-of-structure categories recorded a climb, +26.2%.

Table 2 on of this report reorders and provides more detail on some of the type-of-structure categories in Table 1. The reasons for this ‘second view’ are set out in the footnote.

Among the 12-month moving average trend-line graphs, the flattening in the engineering/civil curve has resulted from a significant jog upwards for bridges that has been counterbalanced by a steeply descending slope for ‘miscellaneous civil’ (e.g., power and oil and gas work), while ‘roads/highways’ and ‘water/sewage’ have stayed on level planes of late. In nonresidential building, both commercial and institutional have backed off a little from their peaks, with ‘retail’ among the subsets showing the most apparent inclination to retreat.

There are preliminary indications that on the cusp of spring, earnings are beginning to blossom. Table B-3 of the latest Employment Situation Report records that construction workers, including bosses, had year-over-year average hourly (+2.7%) and average weekly (+2.4%) earnings in February that were quite close to what all employees in the labor force were receiving (+2.8% and +2.5% respectively).

Nonmanager construction workers, however, did notably better. Whereas for all nonsupervisory employees throughout the economy, both average hourly and average weekly earnings were +2.5%, the comparable gains for those wearing ‘hard hats’ were +3.4% and +3.6%.

ConstructConnect has now moved to a better-targeted and research-assigned ‘start’ date. Prior to January 2017, the ‘start’ date was recorded as occurring within 30 to 60 days of the announced bid date. In concept, a ‘start’ is equivalent to ground being broken for a project to proceed. If work is abandoned or re-bid, the ‘start’ date is updated to reflect the new information.

Click here for the Top 10 featured construction projects in the U.S. - February 2017.