ConstructConnect announced today that August’s volume of construction starts, excluding residential activity, was $33.1 billion − a month-to-month change of -18.9%. The long-term history of the starts data records a ‘normal’ change of -3.5% from July to August, due to seasonality. (Starts are traditionally strongest in Spring and early Summer.) 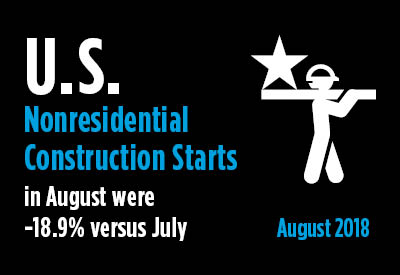 ‘Nonresidential building’ plus ‘engineering/civil’ work accounts for a larger share of total construction than residential activity. The former’s combined proportion of total put-in-place construction in the Census Bureau’s July report was 55%; the latter’s share was 45%. 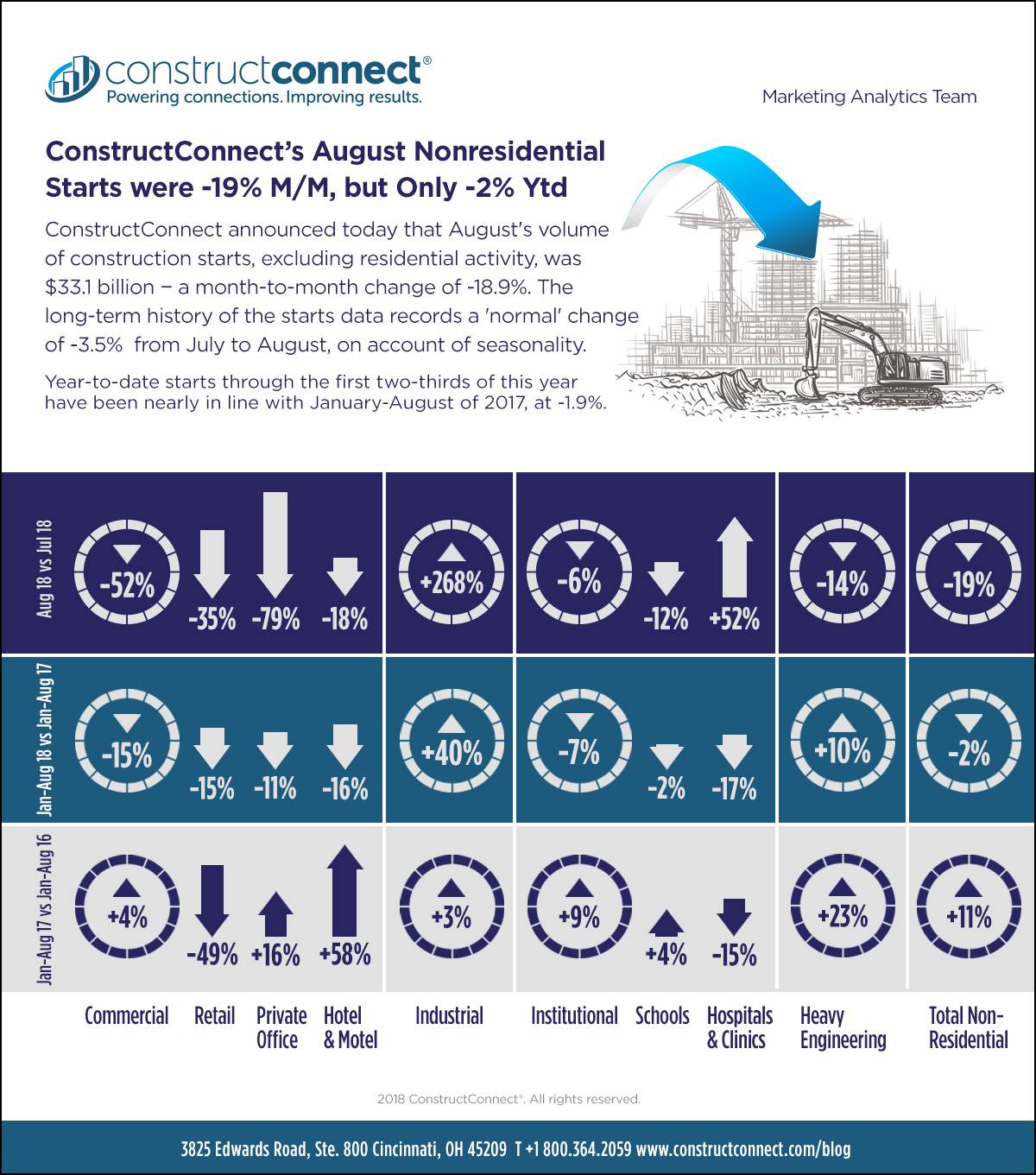 The all-jobs increase for the U.S. economy in August was +1.6% year over year, according to the latest Employment Situation report from the Bureau of Labor Statistics (BLS). Hiring by the construction sector has been more robust, +4.3% year over year. The month-to-month nominal jobs increase in construction in August was +23,000, the same as the average monthly gain since the beginning of this year. Construction hiring on average for January-August 2018 is up by one-third versus 2017’s +18,000 monthly average for the first two-thirds of 2017. Construction’s current unemployment rate is 3.4%, the same as in July, but down from 4.7% in August 2017. Construction’s jobless rate is lower than the ‘headline’ figure for the whole economy, 3.9%.

Year-over-year staffing changes in other industrial sectors with close ties to construction have been: ‘cement and concrete product manufacturing’, -0.1%; ‘real estate firms’, +2.2%; ‘building material and supplies dealers’, +2.5%; ‘architectural and engineering services’, +3.2%; ‘oil and gas extraction’, +4.8%; and most impressive, ‘machinery and equipment rental’, +12.2%.

The month-to-month (m/m) decline of -18.9% in total nonresidential starts in August resulted from relatively minor pullbacks in institutional (-6.0%) and heavy engineering/civil (-13.9%) that were exacerbated by a major downshift in commercial (-52.1%). Industrial, thanks to a couple of large energy-related projects, surged ahead (+268.2%).

The slight easing back year to date (ytd) in total nonresidential starts (-1.9%) in August was a mix of steps forward by engineering (+10.2%) and industrial (+39.8%) that were more than counter-balanced by backtracking steps from institutional (-7.4%) and commercial (-15.4%).

Starring in the institutional starts story so far this has been the ‘schools/colleges’ subcategory. Its share of the institutional total has risen from 43% in January to 59% at present. Educational facility starts in August were -12.3% m/m; and -2.2% ytd; but +20.4% y/y. ‘Hospital/clinic’ starts in the latest month were +51.6% m/m; and +23.6% y/y; but -16.8% ytd. The share of institutional starts taken by the three health care categories – ‘hospitals’, ‘nursing/assisted living’ and ‘miscellaneous medical’ is now 28%, down from its more typical one-third slice.

During the past several months, the slopes of many of the 12-month moving average trend graphs have leveled off rather than sustained upwards or downwards patterns. There have been three exceptions. 12-month moving average ‘retail’ and ‘hospital/clinic’ starts are still showing weakness, while ‘road/highway’ starts have returned to considerable strength.