ConstructConnect's August Starts -2% vs July but +12% Year to Date

ConstructConnect announced today that August’s level of U.S. construction starts, excluding residential work, was $33.8 billion, a month-to-month change of -2.0% versus July’s figure, which has been revised slightly upwards, of $34.5 billion. The mild decrease isn’t quite as large as the usual July-to-August change, due to seasonality, of -3.5%. 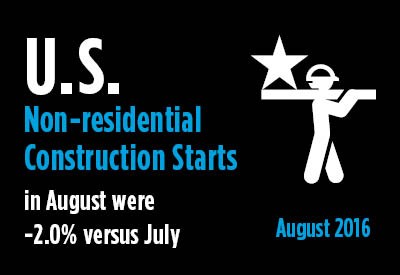 Looking ahead, the month-to-month tendency will be for declines through February of next year.

Compared with the same month of last year, the volume of starts in standalone August of this year was up by double digits, +11.4%. Equally impressive, year-to-date starts through the first two-thirds of 2016 have been +12.3 versus the same January-to-August period of 2015.

‘Nonresidential building’ plus ‘engineering/civil’ work accounts for a considerably larger share of total construction than residential activity. The former’s combined proportion of total put-in-place construction in the Census Bureau’s July report was 60%; the latter’s was 40%.

August’s Employment Situation Report from the Bureau of Labor Statistics (BLS) records a month-to-month construction employment contraction of 6,000 jobs. The year-to-date number of on-site positions is now +43,000 (or +5,000 on average per month) compared with +140,000 (or +18,000 per month) during the first eight months of last year. Year-over-year employment in construction (+3.1%), however, is maintaining a considerably faster pace than for all jobs economy-wide (+1.7%). By comparison, manufacturing jobs are -0.3% year-over-year.

The ‘not seasonally adjusted’ (NSA) unemployment rate in construction in August deteriorated a bit, but remained tight, at 5.1%. In July, it had been 4.5%; in August 2015, 6.1%; and in August 2014, 7.7%. Anecdotally, contractors are complaining about their difficulties in finding workers.

The monthly Employment Situation Report also features two other data series with close ties to hard-hat construction. As a ‘leading’ indicator, – i.e., before there can be field activity, projects must be rendered into working drawings by design professionals − the total number of jobs in architectural and engineering services in August was +2.4% year over year. On a nominal basis, design services jobs are within +7,000 of matching their previous peak of 1.453 million achieved in February 2008. As a ‘coincident’ indicator, the total number of positions at retail outlets specializing in selling ‘building materials and supplies” is presently a quite positive +4.0%.

The -2.0% month-to-month decline in total stars originated in the institutional (-17.5%) and heavy engineering/civil (-8.8%) type-of-structure categories. Commercial work (+28.8%) managed a sizable jump in starts. The smaller-volume category of industrial (+9.9%) was also nicely ahead. (As a sidebar, industrial’s statistics, for any given time frame, can display wild percentage swings depending on the presence or absence of a mega project or two.)

As for year-to-date starts so far in 2016, the commercial (+22.5%) and institutional (+17.5%) type-of-structure categories have delivered commendably upbeat news. Engineering (+4.3%) has registered a modest improvement. Unfortunately, industrial (-42.4%) has disappointed.

Table 2 re-orders and provides more detail on some of the type-of-structure categories in Table 1. The reasons for this ‘second view’ are set out in the footnote.

A sharp divergence in patterns is emerging in the slopes of the 12-month trend graphs. The nonresidential building curves are moving smartly higher. Retail is on an especially sharp incline. The engineering subcategories, with the exception of bridges, are drooping.

On the wage front, construction workers are doing a little better than the employed U.S. labor force as a whole. Whereas August year-over-year average hourly and average weekly earnings for all employees across America, including bosses, were +2.4% and +1.5% respectively, in the construction industry, the comparable rises were +2.8% and +1.7%. Leaving out bosses and concentrating only on production workers, the hourly and weekly compensation gains for total jobs were +2.5% and +2.2%, which trailed construction’s climbs of +3.4% and +2.6%.

ConstructConnect’s nonresidential construction starts series, because it is comprised of total value estimates for individual projects, some of which are ultra-large, has a history of being more volatile than many other leading indicators for the economy.

Click here for the Top 10 featured construction projects in the U.S. - August 2016.