ConstructConnect announced today that December’s level of U.S. construction starts, excluding residential activity, was $24.0 billion, an increase of 3.4% versus the dollar volume in the period before. The gain, small though it may have been, was welcome nonetheless since November-to-December’s long-term average change, on account of inhibiting winter weather, has been -5.0%. 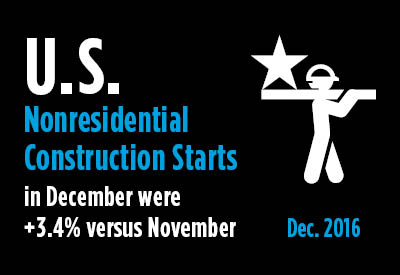 ‘Nonresidential building’ plus ‘engineering/civil’ work accounts for a considerably larger share of total construction than residential activity. The former’s combined proportion of total put-in-place construction in the Census Bureau’s November report was 61%; the latter’s was 39%. 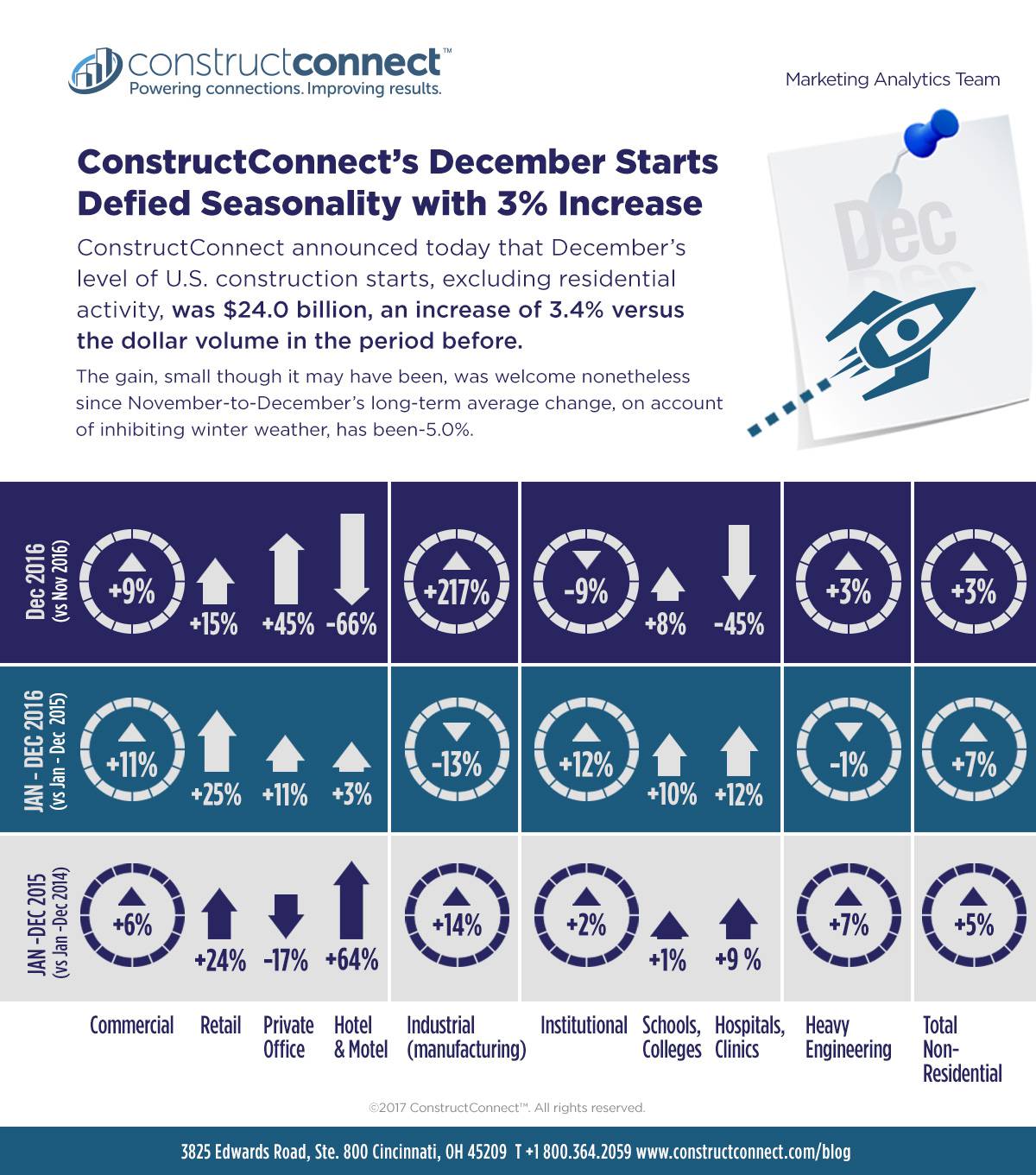 After hiring improvements in September (+26,000 jobs), October (+14,000) and November (+17,000) of last year, staffing in the construction sector flattened out in December (-3,000), according to the latest Employment Situation Report from the Bureau of Labor Statistics (BLS). December’s year-over-year percentage change in construction jobs was +1.5%, exactly the same as for all jobs in the whole economy. Services-providing work was better at +2.0%. The jobless rate in construction in December was 7.4% (NSA), about the same as 12 months prior (7.5%).

There are two other data series with close ties to construction appearing in Table B-1 of the monthly Employment Situation Report. As a ‘leading’ indicator, i.e., before there can be field activity, projects must be rendered into working drawings by design professionals, the total number of jobs in architectural and engineering services in December was +2.0% year over year. In nominal terms, design services jobs (1.454 million) have finally reached and surpassed, although by the slimmest of margins, their previous peak achieved in February 2008 (1.453 million). As a ‘coincident’ indicator, the total number of positions at retail outlets specializing in selling building materials and supplies was +3.0% year over year in 2016’s final month.

December’s month-to-month uptick in total starts (+3.4%) arose mainly in the commercial (+9.3%) type-of-structure category, with a helpful assist from heavy engineering/civil (+2.9%) as well. Institutional (-9.2%) held back the overall advance. Industrial starts (+217.2%) were up in a big way, but that was relative to a small base number, plus this is a category that displays wide swings in any given month depending on the presence or absence of a mega project or two.

The ‘laboratory’ subcategory within commercial should also be mentioned, due to its outsized percentage increases of +1804% m/m and +1466% y/y. Novo Nordisk has initiated new pharmaceutical capital spending in North Carolina. The ytd figure for laboratories was +84.7%.

All of the 12-month moving average trend graphs have either stalled, lost upward momentum or have fallen into mild, sometimes verging on severe, decline. Twelve-month smoothed ‘retail’ and ‘private office building’ starts have pulled back a little. ‘Miscellaneous civil’ starts, which includes electric power and oil and natural gas work, have retreated a lot.

With respect to year-over-year compensation increases in December, as reported by the BLS in its latest Employment Situation Report, construction workers had a mixed basket of rewards. Whereas all workers throughout the economy received average hourly earnings increases of +2.9% when supervisory personnel were included in the mix and +2.5% when overseeing staff were left out, the construction sector’s corresponding compensation rises were slightly better at +3.0% and +3.3% respectively. Average weekly earnings, however, were a different story. The all jobs average weekly earnings gains were +2.3% including bosses and +1.9% omitting bosses. The comparable changes for on-site hard-hat workers were considerably slower at +0.6% and +0.7%. The onset of harsher winter weather undoubtedly restricted time spent in the field.

ConstructConnect’s non-residential construction starts series, because it is comprised of total-value estimates for individual projects, some of which are ultra-large, has a history of being more volatile than many other leading indicators for the economy.

Click here for the Top 10 featured construction projects in the U.S. - December 2016.