ConstructConnect announced today that February’s volume of construction starts, excluding residential activity, was $23.6 billion. The latest month-to-month change in the volume of starts, at -24.3%, was more than the usual mild drop from January to February due to seasonality. 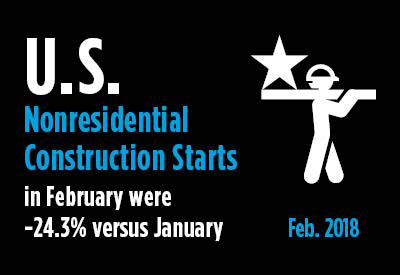 Year-to-date nonresidential starts in 2018 have been -26.4% versus January-February of 2017. The first-two-months of this year versus the comparable period in 2016 was a less severe slide of -3.2%. 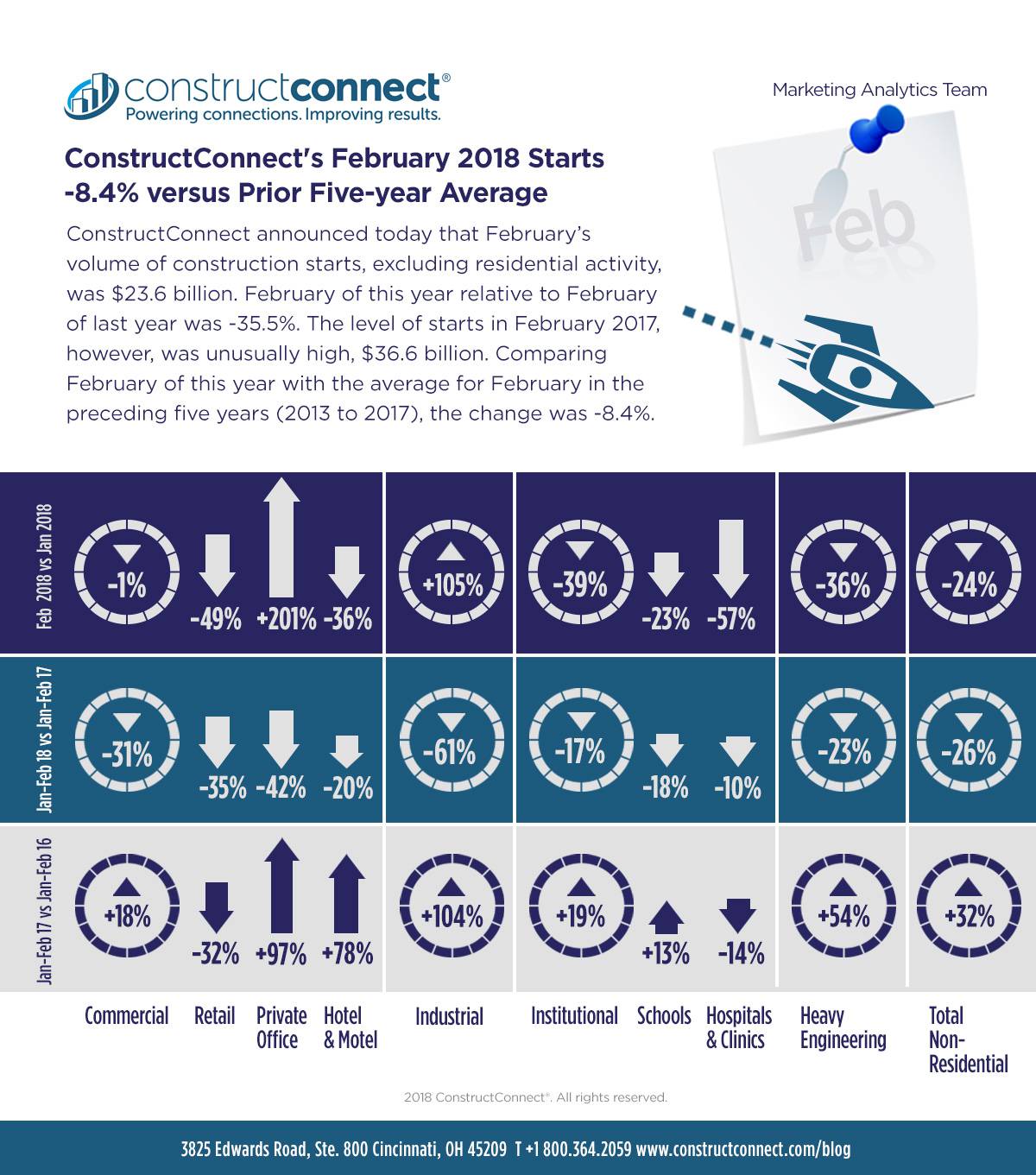 ‘Nonresidential building’ plus ‘engineering/civil’ work accounts for a larger share of total construction than residential activity. The former’s combined proportion of total put-in-place construction in the Census Bureau’s January report was 60%; the latter’s share was 40%.

Over the past four months, jobs growth in construction has been surging. From November 2017 through January 2018, the month-to-month employment pickups were +42,000, +42,000 and +40,000 respectively. February’s result was a further quickening of the pace, +61,000. The combined four-month gain in construction hiring has been +185,000 jobs. The last time there was such a substantial four-month increase was from January to April 2006, +193,000. In 2006, though, there was a homebuilding boom, fueled by subprime mortgages, that turned into a bust.

Total construction employment is still half a million jobs below its prior peak in 2007, before the onset of the Great Recession. That gap will likely be eliminated quickly. According to the latest Employment Situation report from the Bureau of Labor Statistics (BLS), the U.S. construction sector is generating jobs at a year-over-year rate (+3.7%) that is more than twice as fast as for all workers in the economy (+1.6%). The unemployment rate in the sector in the latest February was 7.8%. Twelve months ago, it had been 8.8%. The jobless figure is traditionally worse in winter.

The Employment Situation report also includes jobs results for three other sectors with close ties to construction. Employment with ‘real estate’ offices in February was +1.7% year over year; with ‘building material and garden supply stores’, +3.9%; and with ‘architectural and engineering services’ firms, +3.3%. Since designers must provide assembly instructions before projects can proceed, their +3.3% staffing increase suggests ongoing healthy construction activity.

The nearly one-quarter (-24.3%) decline in total nonresidential starts month to month (m/m) in the latest February was due to almost equally substantial declines in the institutional (-39.1%) and heavy engineering/civil (-35.6%) type-of-structure categories. Commercial (-1.3%) was almost flat and industrial took a nice step forward, more than doubling (+104.6%).

The six graphs show 12-month moving-average trend lines of starts for many of the major type-of-construction subcategories. Most of the curves have recently been descending, with the steepest degree of decline being exhibited by retail. Retail’s reversal began in mid-2016. Continuing to generally move upwards, however, are bridge and miscellaneous civil starts.

Tables B-3 and B-8 in the monthly Employment Situation report record average hourly and average weekly wages for industry sectors. B-3 is for all employees (i.e., including bosses) on nonfarm payrolls; B-8 is for ‘production and nonsupervisory personnel’ only (i.e., it excludes bosses). From B-3, average hourly wages were +2.6% y/y across all industries in February and average weekly wages were +2.9%. From B-8, the corresponding gains were +2.5% and +3.1%.