ConstructConnect announced today that January’s volume of construction starts, excluding residential activity, was $29.3 billion. The fact that some of the monthly starts numbers can display wild swings is confirmed by the following. January 2018’s volume of starts relative to December 2017’s level was +35.8%; but January 2018 compared with January 2017 was -22.6%. 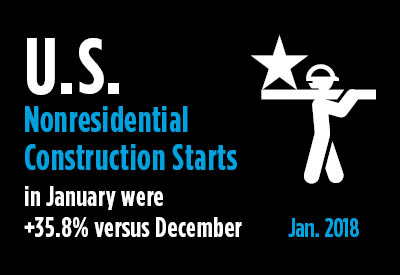 The outsized percentage changes resulted from December 2017 being abnormally low ($21.6 billion) and January 2017 being inordinately high ($37.9 billion). Usually, it’s the presence or absence of a mega project or two that causes the monthly number to display extreme volatility.

Comparing January of this year with the annual average for January from the preceding five years, 2013 to 2017, − i.e., employing a ‘smoothing’ technique, − yields an increase of +9.7%. 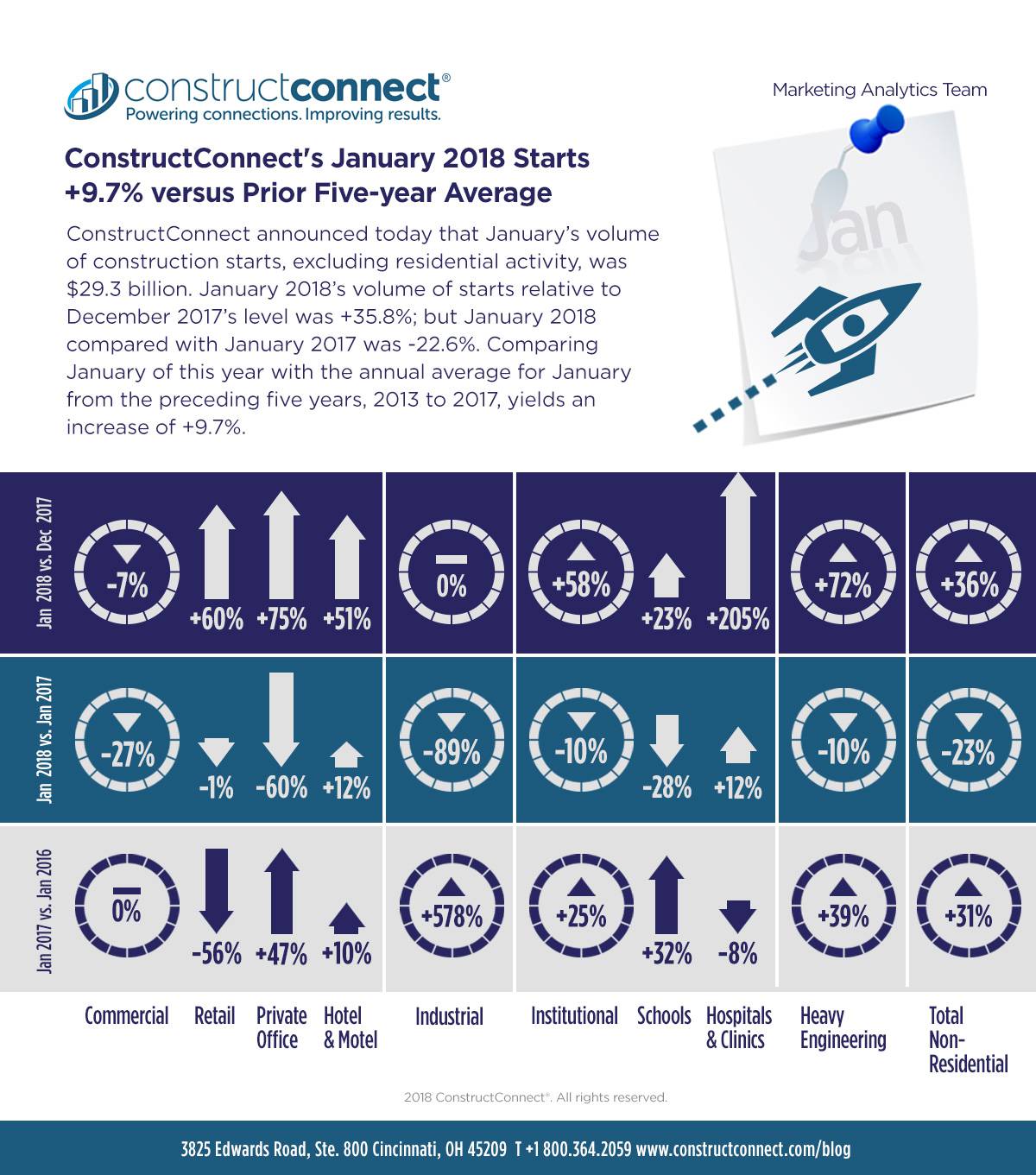 ‘Nonresidential building’ plus ‘engineering/civil’ work accounts for a larger share of total construction than residential activity. The former’s combined proportion of total put-in-place construction in the Census Bureau’s December report was 59%; the latter’s was 41%.

According to the latest Employment Situation report from the Bureau of Labor Statistics (BLS), the U.S. construction sector is generating jobs at a year-over-year pace that is more than twice as fast as what the whole economy is managing, +3.3% versus +1.5%. In a ranking of sectors, construction’s employment performance (+3.3%) is in first place, with ‘transportation and warehousing’ (+2.9%) in second. Construction’s NSA unemployment rate in January 2018 was 7.3%, which is low for winter. Twelve months earlier, in January 2017, it had been 9.4%.

The year-over-year staffing advance at architectural and engineering firms engaged in designing structures – i.e., their work is out-front of field assembly − was also strong in January, +3.0%. Additionally, the BLS provides jobs data for two other segments of the economy with close ties to construction: ‘real estate’ and ‘building material stores’. Both also achieved jobs growth (+1.8% and +2.6% respectively) in January that exceeded the all-positions average (+1.5%).

January’s more than one-fifth decline (-22.6%) in total nonresidential starts year over year (y/y) was due to weakness in all four of the major type-of-structure subcategories. Industrial (-89.2%) retreated the most, followed by commercial (-27.4%). The losses suffered by institutional (-9.8%) and heavy engineering/civil (-9.7%) were almost the same.

For every month of the year except January, the commentary in this report would normally go on to consider year-to-date results. January is unique, however, in that its statistics and year-to-date findings are one and the same. Therefore, the following will discuss both m/m and y/y performances among disaggregated market segments. Also keep in mind that January is too early in the year to leap to too many conclusions about such matters as shifting market shares.

‘Road and highwy’ initiations are usually the biggest component of overall engineering starts. In January 2018, such street starts were outstanding m/m (+75.9%), but lackluster y/y (-0.5%). ‘Water/sewage’ is also traditionally an important cog in engineering and in the latest month, its starts volume was an upbeat +39.6% m/m, but a dismal -62.2% y/y.

‘Schools/colleges’ is almost always the biggest market niche within institutional. In January, starts on academic facilities were +22.5% m/m, but -28.1% y/y. The ‘hospital/clinic’ designation also plays a prominent role in institutional construction. The latest results for groundbreakings on medical facilities were an impressive +204.7% m/m, but a more modest +11.6% y/y.

The six graphs show 12-month moving average trend lines of starts for many of the major type-of-construction subcategories. There have been more slopes that have been falling recently rather than rising. Among the structure types taking descending paths have been ‘retail’, ‘private office buildings’, ‘schools’ and ‘water/sewage’. There have also been a couple, however, displaying sharp upwards turns – ‘miscellaneous civil (i.e., power and energy)’ and ‘bridges’.

Included in the BLS Employment Situation report are two tables on workplace compensation levels which analysts scour for evidence of quickly rising wages, since such a turn of events may forewarn of more aggressive interest rate hikes by the Federal Reserve to dampen inflationary tendencies. BLS Table B-3 includes ‘supervisory personnel’ while BLS Table B-8 does not.