ConstructConnect announced today that June construction starts, excluding residential activity, fell -13.7% versus May. The usual May-to-June change, due to seasonality, is +4.5%. 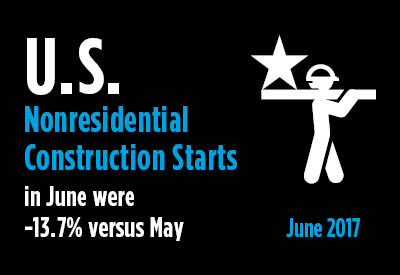 Year-to-date starts through the first half of this year, compared with January-to-June of last year,  stayed positive at +2.4%.

‘Nonresidential building’ plus ‘engineering/civil’ work accounts for a considerably larger share of total construction than residential activity. The former’s combined proportion of total put-in-place construction in the Census Bureau’s May report was 57%; the latter’s was 43%. 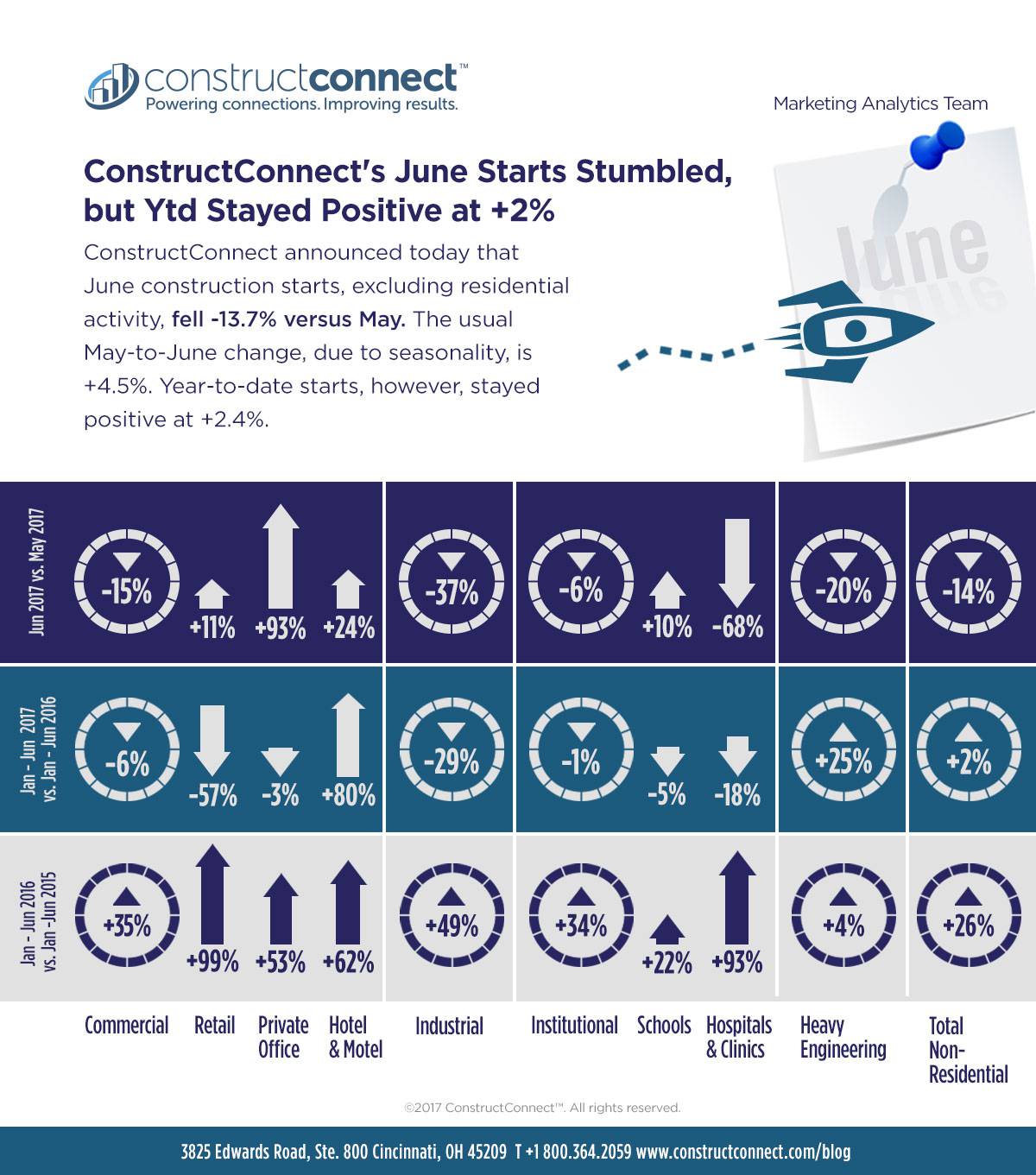 According to the latest Employment Situation Report from the Bureau of Labor Statistics (BLS), the total number of jobs in construction climbed by +16,000 in June. The monthly average rise in on-site work so far this year has been +19,000, almost double the pace of +10,000 set in last year’s first half. Among industrial sectors, construction is tied with ‘professional and business services’ for best year-over-year percentage change in jobs, +3.1%. The +1.6% performance for all jobs in the economy is only about half as quick. Construction’s NSA unemployment rate in June was an exceedingly low 4.5%. In May, it had been 5.3% and in June 2016, 4.6%.

Employment in ‘architectural and engineering services’ rose by +5,000 jobs in June, yielding a year-over-year pickup of +3.8%. Healthy hiring by the design professions is a positive ‘leading indicator’ for construction. Turning owners’ capital spending wishes into visualizations and then creating ‘assembly instructions’ are crucial first steps prior to work proceeding at job sites.

There were nothing but declines month to month (m/m) in all four major type-of-structure subcategories. Industrial dipped the most (-36.7%), followed by heavy engineering/civil (-19.8%). Commercial also exhibited weakness (-14.8%), while institutional (-5.5%) retreated the least.

An impressive +43.4% change for ‘miscellaneous commercial’ ytd is a combination of -26.9% ytd for ‘transportation terminals’ being more than offset by +92.8% for ‘sports stadiums’.

The 12-month moving average trend graphs show nonresidential building giving up ground on the heights while heavy engineering is gradually scaling the foothills. The slopes for ‘private office buildings’, ‘schools/colleges’ and especially ‘retail’ are clearly descending. Acting as counter-weights, the curves for ‘roads/highways’ and ‘bridges’ are on the ascendant.

As for year-over-year compensation levels in June, as reported by the BLS in the latest Employment Situation Report (Tables B-3 and B-8), there wasn’t much difference between all workers and those engaged in construction. Including supervisory personnel, year-over-year average hourly and average weekly earnings economy-wide were +2.5% and +2.8% respectively. The comparable figures in the construction sector were +2.5% and +2.7%.