ConstructConnect announced today that March’s volume of construction starts, excluding residential activity, was $36.3 billion. The latest month-to-month change in the volume of starts was +46.1%. The major reason for the big jump upwards was an initiation of work on a mega project, the Atlantic Coast natural gas pipeline, with an estimated value of $5.5 billion. 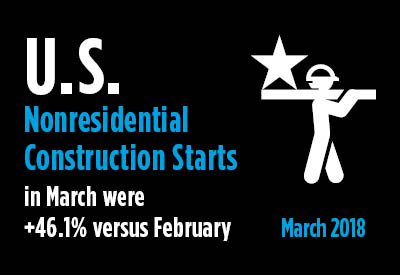 Year-to-date nonresidential starts in the latest March were -22% compared with the same January-to-March period of 2017. Q1 2018’s almost sole source of strength was civil starts. 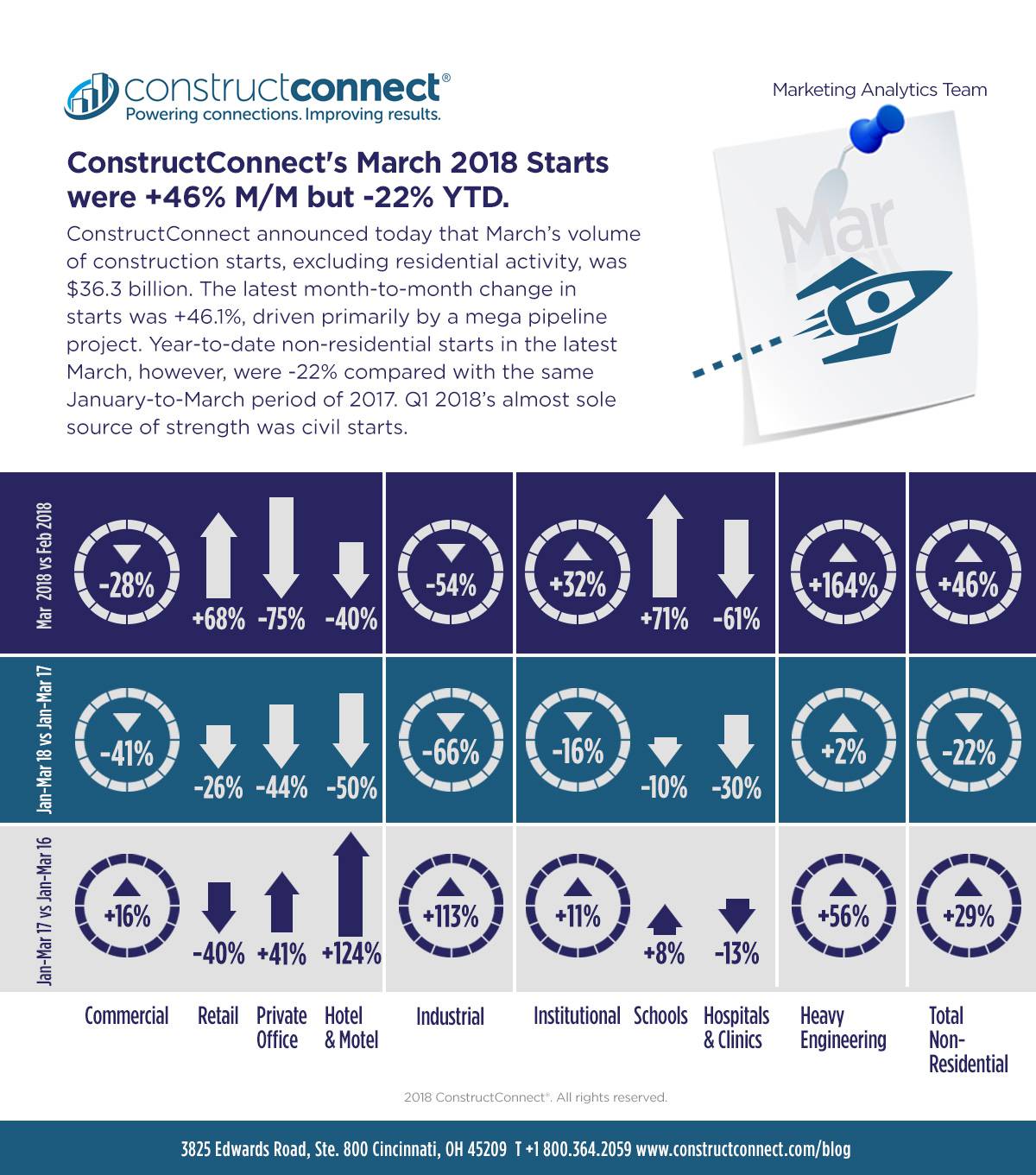 ‘Nonresidential building’ plus ‘engineering/civil’ work accounts for a larger share of total construction than residential activity. The former’s combined proportion of total put-in-place construction in the Census Bureau’s February report was 59%; the latter’s share was 41%.

The latest Employment Situation report from the Bureau of Labor Statistics (BLS) records a decline of -15,000 in the total number of construction jobs in the U.S. in March. During the prior four months, however, there had been a surge of hiring in the sector amounting to +177,000 jobs.

The NSA unemployment rate in construction in March of this year was 7.4%. In the same third month of last year, it had been 8.4%. Year-over-year construction employment is currently +3.3%. The percentage change for the total jobs increase in the U.S. economy is +1.5%.

Relative to peak levels prior to the recession in 2008-09, employment in residential construction is currently off by -23.0% (i.e., almost one-quarter); nonresidential building construction jobs are down by -5.0%; but the heavy engineering/civil worker count is -0.6% (i.e., nearly even).

The March 2018 year-over-year percentage increases in employment in three other pockets of the economy with close ties to construction were: ‘building material and garden supply stores’, +3.7%; ‘real estate offices’, +2.2%; and ‘architectural and engineering services’ firms, +2.7%.

The six graphs show 12-month moving-average trend lines of starts for many of the major type-of-construction subcategories. Almost all the curves have been sloping downwards of late, with the two notable exceptions in Graph 6. The bridge trend line has been rising (until the latest month), but far more remarkable has been the steep skyward climb for ‘miscellaneous civil’.

Tables B-3 and B-8 in the monthly Employment Situation report record average hourly and average weekly wages for industry sectors. B-3 is for all employees (i.e., including bosses) on nonfarm payrolls; B-8 is for ‘production and nonsupervisory personnel’ only (i.e., it excludes bosses). From B-3, average hourly wages were +2.7% y/y across all industries in March and average weekly wages were +3.3%. From B-8, the corresponding gains were +2.4% and +2.7%.