ConstructConnect announced today that November’s level of U.S. construction starts, excluding residential activity, was $23.4 billion, a plunge of -22.2% versus the dollar volume in the period before. October-to-November’s long-term average decline, on account of seasonality, has been a much smaller -2%. (Looking ahead, November to December is usually a bigger drop, -5.0%). 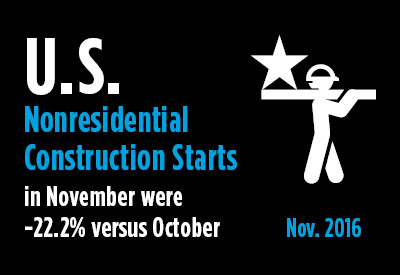 November of this year compared with November of last year was also a decline, but one that was less dramatic -8.5%. Year-to-date starts, though, stayed on the positive side of the ledger, at +8.0% versus their volume through the same January-to-November time frame of 2015.

The monthly starts statistics have been sharply up and down of late. They were -24.3% in September, but +16.5% in October. Compared with November’s average performance during the previous five years, 2011 to 2015, the latest result was remarkably consistent, +1.6%.

‘Nonresidential building’ plus ‘engineering/civil’ work accounts for a considerably larger share of total construction than residential activity. The former’s combined proportion of total put-in-place construction in the Census Bureau’s October report was 60%; the latter’s was 40%. 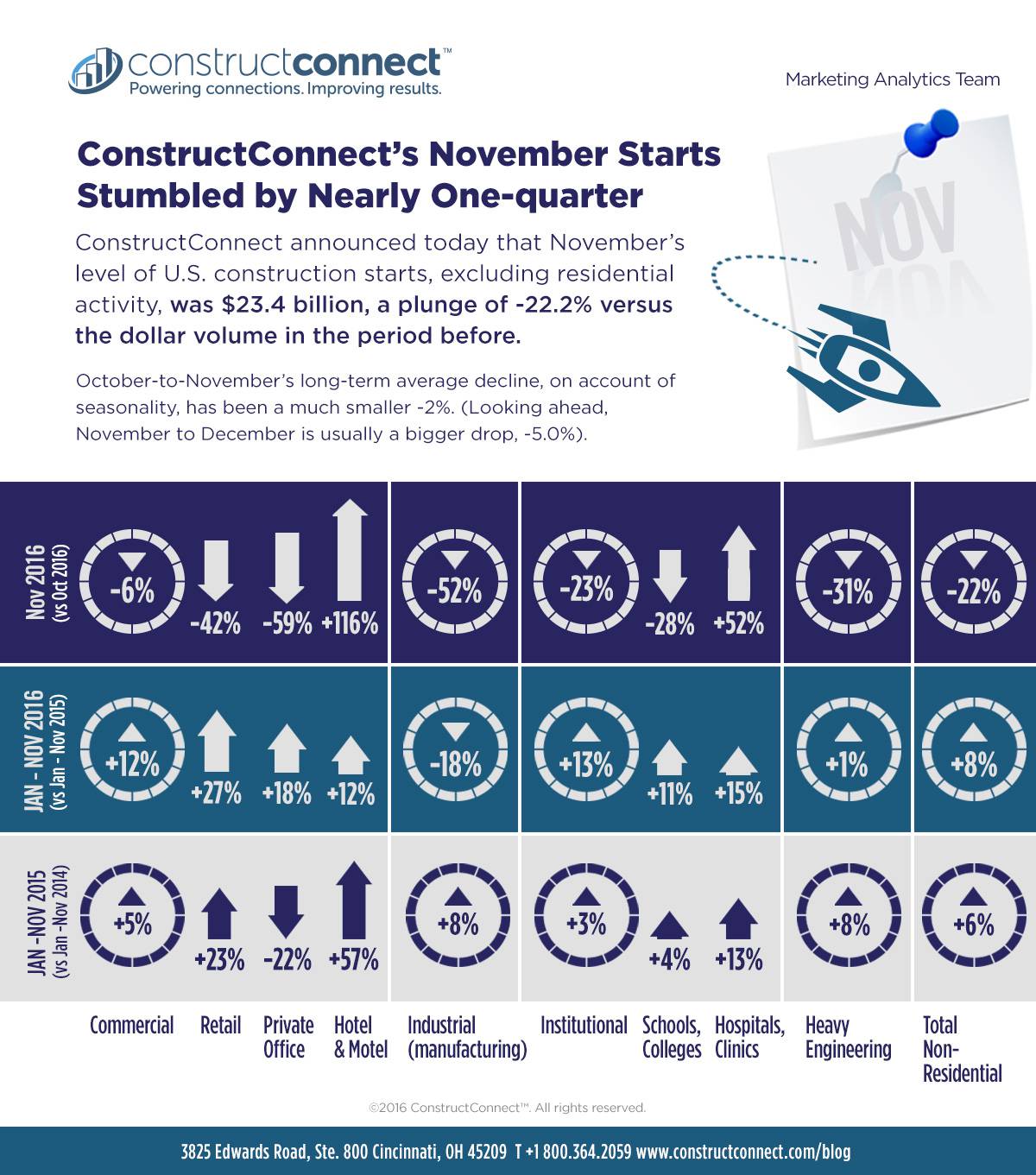 After month-to-month net jobs gains in September (+26,000) and October (+14,000), employment in construction rose again in November (+19,000), according to the latest Employment Situation Report from the Bureau of Labor Statistics (BLS). The last time the sector’s payroll contracted was in August, -6,000. The year-over-year employment gain in construction has been +2.4%, which has been faster than the total U.S. jobs advance of +1.6%. But job creation in construction has been slowing since December 2014’s best rise of +6.1%.

There are two other data series with close ties to construction work that appear in Table B-1 of the monthly Employment Situation Report. As a ‘leading’ indicator, – i.e., before there can be field activity, projects must be rendered into working drawings by design professionals − the total number of jobs in architectural and engineering services in November was +2.1% year over year. In nominal terms, they have now climbed to a perch near the same level as when they were at their previous peak in February 2008.  And as a ‘coincident’ indicator, the total number of positions at retail outlets specializing in selling building materials and supplies was +3.5%.

November’s pullback in total month-to-month starts (-22.2%) resulted from widespread declines among the three major type-of-structure categories. Heavy engineering/civil (-31.1%) was worst. Institutional (-23.0%) was also down markedly. Commercial (-6.3%) wasn’t as bad. Smaller-volume industrial (-52.4%) was less by half, but this is a category that often displays wide swings in any given month, depending on the presence or absence of a mega project or two.

At nearly 60%, the ‘schools/colleges’ subcategory has dominated institutional work so far this year. November, however, was a spotty month for starts on educational facilities. They were -28.2% month over month (m/m); and -15.7% year over year (y/y); but +10.6% year to date (ytd).

Table 2 re-orders and provides more detail on some of the type-of-structure categories in Table 1. The reasons for this ‘second view’ are set out in the footnote.

Among the 12-month moving average trend graphsp, the ‘miscellaneous civil (e.g., power, etc.)’ curve has seriously nosedived over the past several months, ‘retail’ has more recently retreated after a lofty climb and private office buildings have eased somewhat. ‘Schools/colleges’, ‘roads/highways’ and ‘bridges’ appear uncertain as to the direction to take.

With respect to compensation increases as reported in November’s Employment Situation Report, construction nearly matched or bettered economy-wide gains. Including supervisory personnel, average year-over-year earnings increases were +2.5% hourly and +2.2% weekly for all jobs. For the ‘hard hat’ contingent on its own, they were +2.4% and +2.7% respectively. For production workers only (i.e., omitting bosses), the all-jobs earnings jumps were +2.4% hourly and +2.1% weekly. Construction was a nice step ahead at +3.2% both hourly and weekly.

Click here for the Top 10 featured construction projects in the U.S. - November 2016.