ConstructConnect announced today that September’s volume of construction starts, excluding residential work, was $32.7 billion − a month-to-month change of -4.8%. The history of the starts data records a ‘normal’ change from August to September, due to seasonality, of -3.0%. Starts traditionally perform best in the sunnier-weather months of Spring and early Summer. 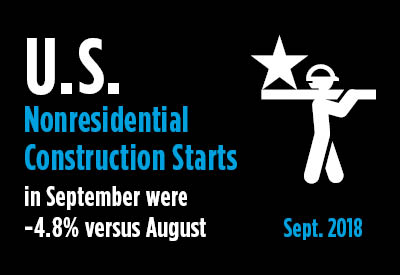 Compared with September of last year, this year’s latest-month starts volume was -31.0%. September of 2017, however, was exceptionally bullish. It was 2017’s strongest month, bolstered by three mega projects (an Exxon Mobil plastics plant; the Atlantic Sunrise pipeline project; and a new Delta Airlines terminal at LaGuardia Airport). Relative to the five-year average for September, from 2013 through 2017, this year’s latest-month starts volume was +4.8%. Year-to-date starts in 2018 compared with January-to-September of 2017 have been -5.0%.

‘Nonresidential building’ plus ‘engineering/civil’ work accounts for a larger share of total construction than residential activity. The former’s combined proportion of total put-in-place construction in the Census Bureau’s August report was 58%; the latter’s was 42%. 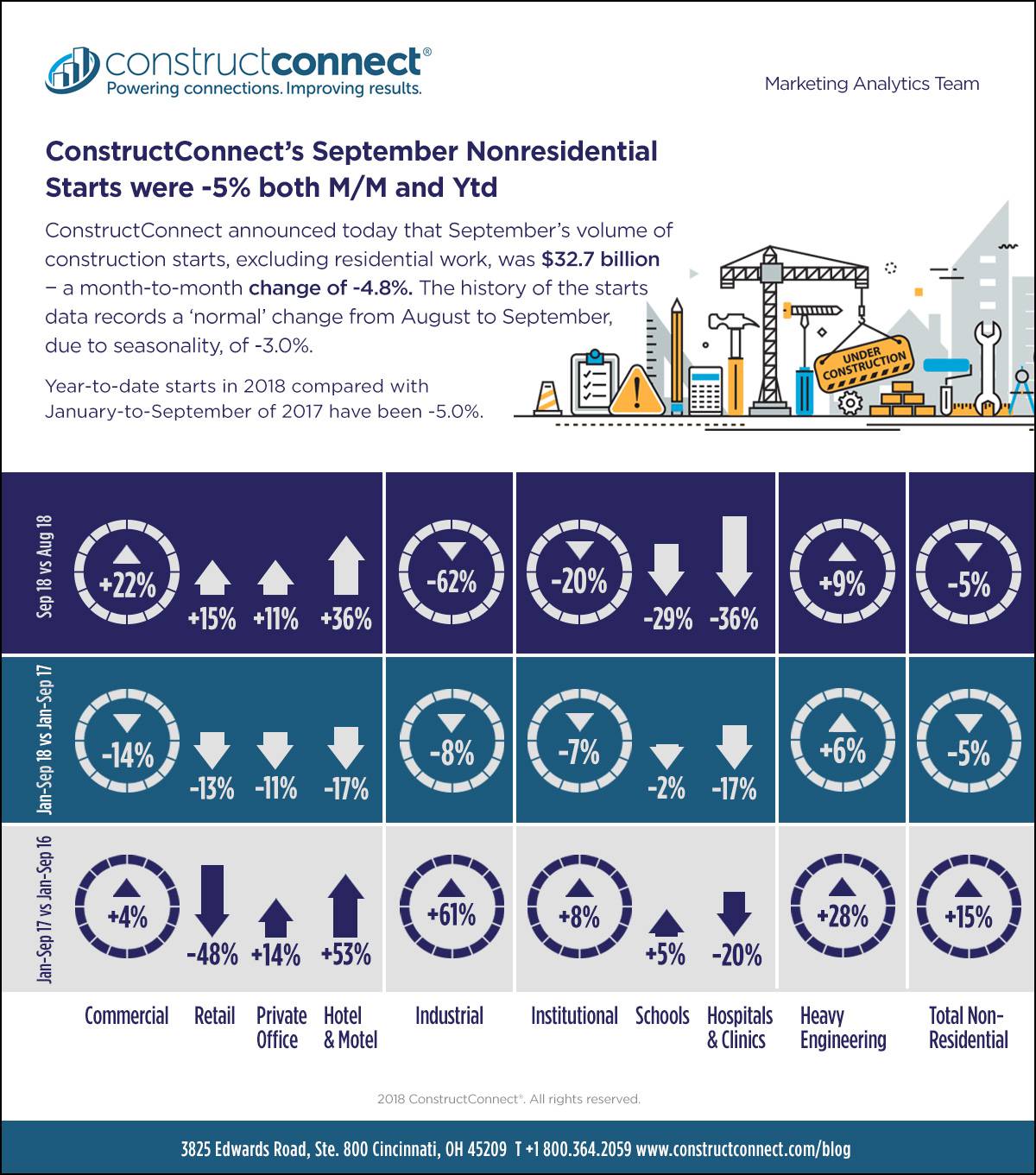 Based on the data appearing in the monthly Employment Situation report from the Bureau of Labor Statistics (BLS), U.S. construction hiring in the latest two months, − +26,000 jobs in August and +23,000 in September – has been in close alignment with the nine-month average climb of +24,000 so far this year. The +24,000 figure is a jump of +44% compared with January-September 2017’s monthly average increase of +17,000.

The U.S. total jobs count in September was +1.7% year over year. Construction raced ahead much faster, +4.5%. Year-over-year staffing changes in other sectors important to construction have been: ‘cement and concrete product manufacturing’, -0.2%; ‘building material and supplies dealers’, +2.2%; ‘real estate firms’, +2.7%; ‘architectural and engineering services’, +2.8%; ‘oil and gas extraction’, +3.7%; and, leading the pack, ‘machinery and equipment rental’, +12.2%.

The month-to-month (m/m) easing of -4.8% in total nonresidential starts in September was due to substantial pullbacks in the industrial (-61.8%) and institutional (-19.5%) subcategories. On the plus side, commercial (+22.2%) and heavy engineering/civil (+9.3%) were upbeat.

The modest decline year to date (ytd) in total nonresidential starts (-5.0%) in the latest month was the result of engineering (+6.3%) not quite being able to overcome the combined negativity from poorly-performing institutional (-7.2%), industrial (-7.7%) and commercial (-14.0%).

The ‘school/college’ subcategory (a 59% share) has been dominant within institutional to date this year. Educational facility starts in September were -29.3% m/m, -2.7% y/y and -1.9% ytd. Medical facility starts – i.e., the summation of ‘hospital/clinic’, ‘nursing/assisted living’ and ‘miscellaneous medical’ work – have accounted for 28% of institutional in 2018. Such combined health care groundbreakings in the latest month were +4.8% m/m, but -8.5% y/y and -13.8% ytd.

There’s about an even degree of diversity among the 12-month moving average trend graphs. Several of the type-of-structure slopes have been moving upwards – ‘roads/highways’, ‘bridges’ and ‘miscellaneous civil’ (although after shooting way up, it has more recently moderated). Several have been shifting downwards – ‘retail’, ‘private office buildings’ and ‘hospitals/clinics’. And a couple are essentially flat – ‘schools/colleges’ and ‘water/sewage’.

Tables B-3 and B-8 of the monthly Employment Situation report record average hourly and average weekly wages for industry sectors. B-3 is for all employees (i.e., including bosses) on non-farm payrolls; B-8 is for ‘production and non-supervisory personnel’ only (i.e., it excludes bosses). For ‘all jobs’ and construction, there are eight relevant percentage changes to consider.