ConstructConnect announced today that December’s volume of construction starts, excluding residential activity, was $21.1 billion. The month-to-month change versus November 2017 was -21.5%. The usual November-to-December pullback in starts, due to seasonality (i.e., the onset of winter weather), is -5.0%. December 2017 compared with December 2016 was -27.8%. 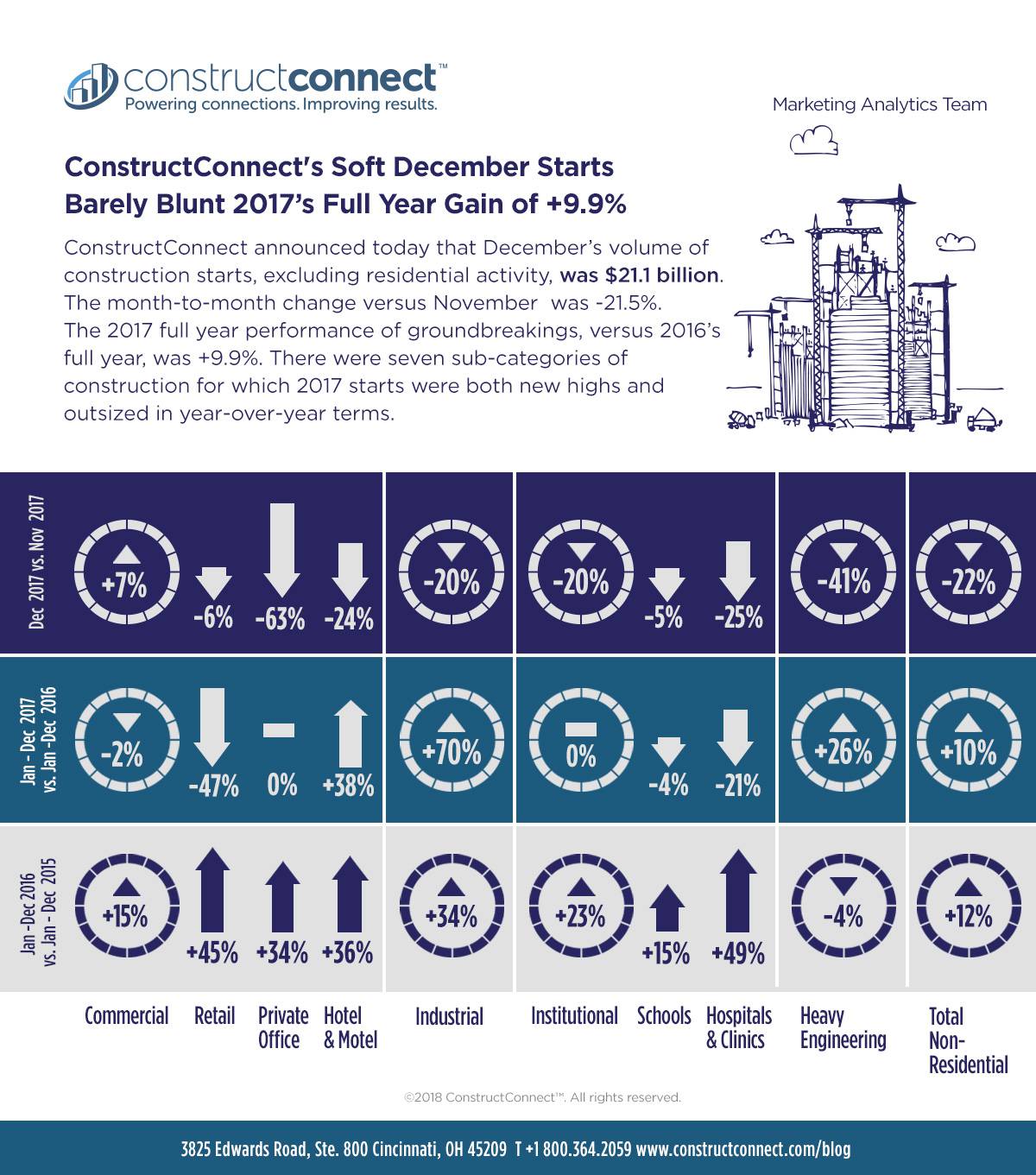 ‘Nonresidential building’ plus ‘engineering/civil’ work accounts for a larger share of total construction than residential activity. The former’s combined proportion of total put-in-place construction in the Census Bureau’s November report was 58%; the latter’s was 42%.

In several other employment categories with close ties to construction, the year-over-year jobs record has also been upbeat: ‘building material and garden equipment suppliers’, +2.2%; and ‘real estate companies’, +2.0%. Most significant, however, has been the hiring undertaken by firms engaged in ‘architectural and engineering services’. It has proceeded at a +3.0% year-over-year pace for the past ten months. Design work is a leading indicator for onsite activity since a set of assembly instructions must be compiled before construction can proceed.

December’s one-fifth drop in total nonresidential starts (-21.5%) month to month (m/m) resulted from matching declines in industrial (-20.4%) and institutional (-19.9%) and a twice-as-severe pullback in heavy engineering/civil (-40.7%), with commercial providing an increase (+6.8%).

The six graphs show 12-month moving average trend lines for several major types-of-structure. The slopes of many of the nonresidential building subcategories have been dipping lower of late. Moving sharply higher, though, have been ‘bridges’ and ‘miscellaneous civil’.

The restraint in wage gains for all workers throughout the U.S. economy continued to be evident in the results appearing in Table B-3 of the latest Employment Situation report. Table B-3 is for all workers, including supervisory personnel, and it records December average earnings increases of +2.5% y/y hourly and +2.8% weekly. Construction, however, broke away from the pack, at +3.0% hourly and +4.0% weekly. Field-work labor shortages are fueling stronger spikes.

The disparities are even greater when supervisory personnel are omitted (Table B-8 of the BLS report). The economy-wide compensation gains in December, excluding bosses, were +2.3% y/y hourly and +2.9% weekly. For construction, the corresponding climbs were +3.1% and +4.7%.