ConstructConnect today announced a July volume of construction starts, excluding homebuilding activity, that amounted to $30.8 billion. July’s nonresidential total was -13.8% versus the comparable sum in June. The usual June-to-July change, due to seasonality, is +3.5%. 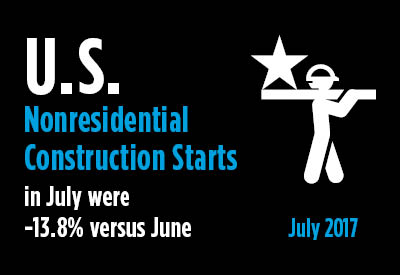 Year-to-date starts through the first seven months of this year are now almost exactly the same as they were from January-to-July of last year. They are barely positive, at +0.5%.

‘Nonresidential building’ plus ‘engineering/civil’ work accounts for a considerably larger share of total construction than residential activity. The former’s combined proportion of total put-in-place construction in the Census Bureau’s June report was 58%; the latter’s was 42%. 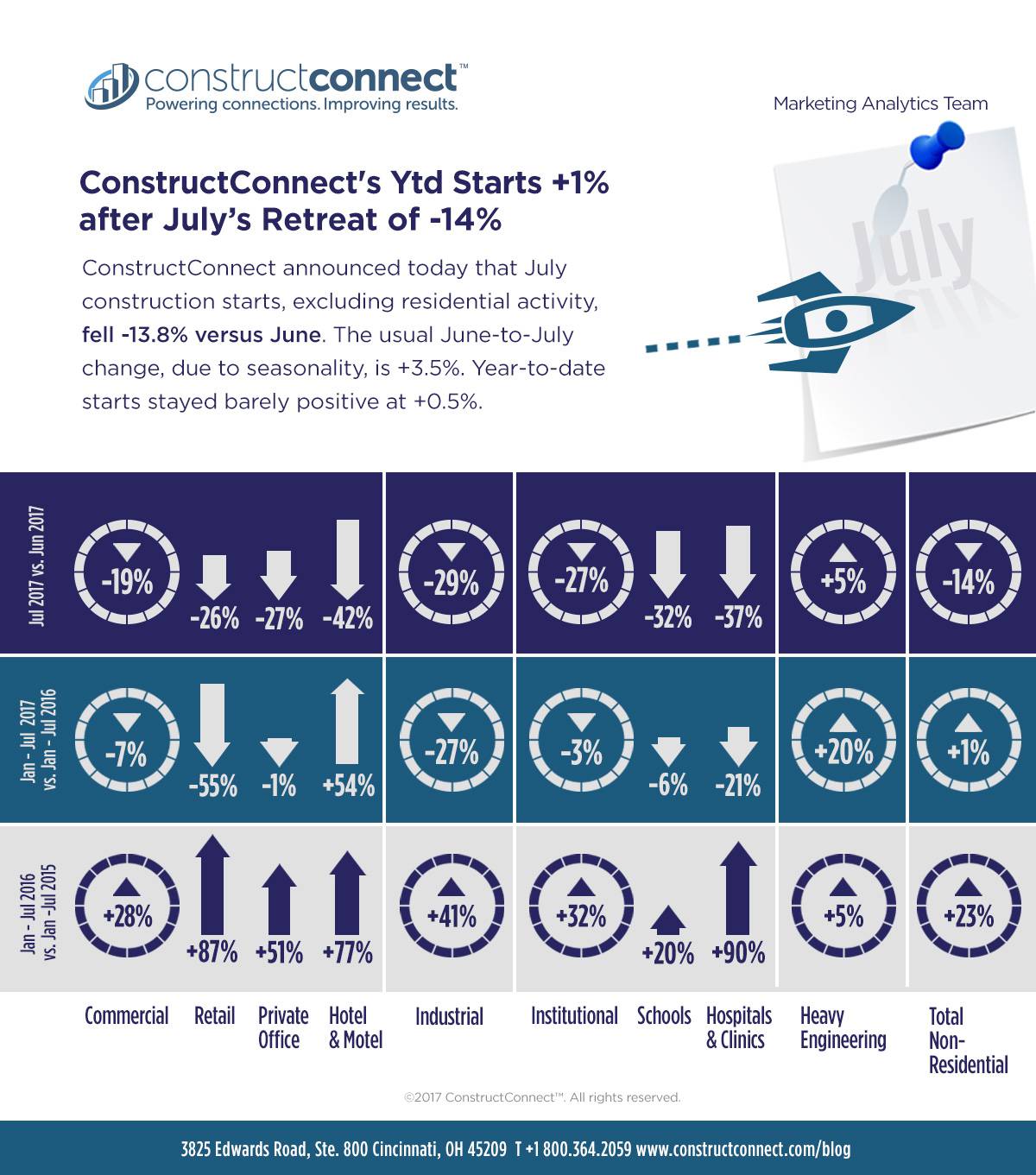 The total number of jobs in construction in the U.S. rose by +6,000 in July according to the latest Employment Situation report from the Bureau of Labor Statistics (BLS). Thanks to strong hiring in the on-site sector in January (+34,000) and February (+54,000), the monthly average increase through July of 2017 has been +17,000, a solid improvement versus the +11,000 figure on average through the same time frame in 2016. The year-over-year climb in ‘hard hat’ jobs is presently +2.8%, which is nearly double the increase for all jobs economy-wide (+1.5%).

The not seasonally adjusted (NSA) unemployment rate in construction in July of this year was 4.9%. For the same seventh month of last year, it had been a little tighter, at 4.5%.

Jobs with architectural and engineering firms climbed by +3.6% year over year in July. Healthy hiring by the design professions is an encouraging ‘leading indicator’ for construction. In other fields of employment with ties to construction, ‘building material and supplies dealers’ have raised payrolls by a mere +0.4% year over year. The ‘oil and gas extraction’ sector, though, has turned an important corner. After 26 months in a row of negative year-over-year jobs results, it has finally achieved increases in the latest two months, June (+0.1%) and July (+0.2%).

Month-to-month (m/m) starts overall (-13.8%) were led downwards by the industrial (-29.1%) and institutional (-27.4%) subcategories, with commercial (-18.8%) also significantly failing to match its previous level. Only heavy engineering/civil successfully pulled off a gain (+4.7%).

The year-to-date (ytd) total starts performance of +0.5% has resulted from an uplift in engineering (+19.9%) that has been almost exactly counterbalanced by combined downshifts in industrial (-27.2%), commercial (-7.1%) and institutional (-2.6%).

There are four types-of-structures embedded within other categories that have been managing upbeat performances worthy of mention: ‘sports stadiums/convention centers’, +89.3% ytd; ‘courthouses’, +146.8% ytd; ‘prisons’, +35.0% ytd; and ‘junior/senior high schools’, +9.4% ytd.

Table 2 of this report reorders and provides more detail on some of the type-of-structure categories in Table 1. The reasons for this ‘second view’ are set out in the footnote.

The six graphs on show 12-month moving average trend lines for major type-of-structure categories. While ‘private office buildings’, ‘schools/colleges’ and ‘hospitals/clinics’ all display curves that have recently been descending, the most severe pullback has been in ‘retail’. On the flip side, only ‘roads/highways’ is sustaining a long-term pattern of moving upwards, as the past-couple-of-years’ positive trend for ‘bridges’ has run into a snag of late.

As for compensation increases in the latest month, Table B-3 (which includes supervisory personnel) of the latest Employment Situation report from the BLS records a +2.4% y/y gain for both average hourly and average weekly earnings in the construction sector. The all-jobs hikes were a little better at +2.5% and +2.8% respectively. Table B-8 of the BLS report (which omits bosses), has construction workers’ earnings at +2.5% y/y both hourly and weekly, while the national all-jobs increases weren’t quite as ‘meaty’, at +2.4% both hourly and weekly.