ConstructConnect announced today that May construction starts, excluding residential activity, were +5% versus April. The modest rise fell a little short of the usual percentage change between April and May, due to seasonality, of +8%. 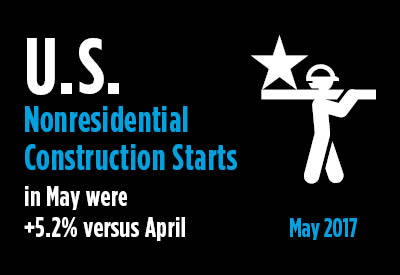 Versus May of last year, nonresidential starts in the fifth month of this year were +2.0%.

Compared with January through May of last year, the year-to-date volume of starts in 2017 has been +1.9%.

‘Nonresidential building’ plus ‘engineering/civil’ work accounts for a considerably larger share of total construction than residential activity. The former’s combined proportion of total put-in-place construction in the Census Bureau’s April report was 56%; the latter’s was 44%. 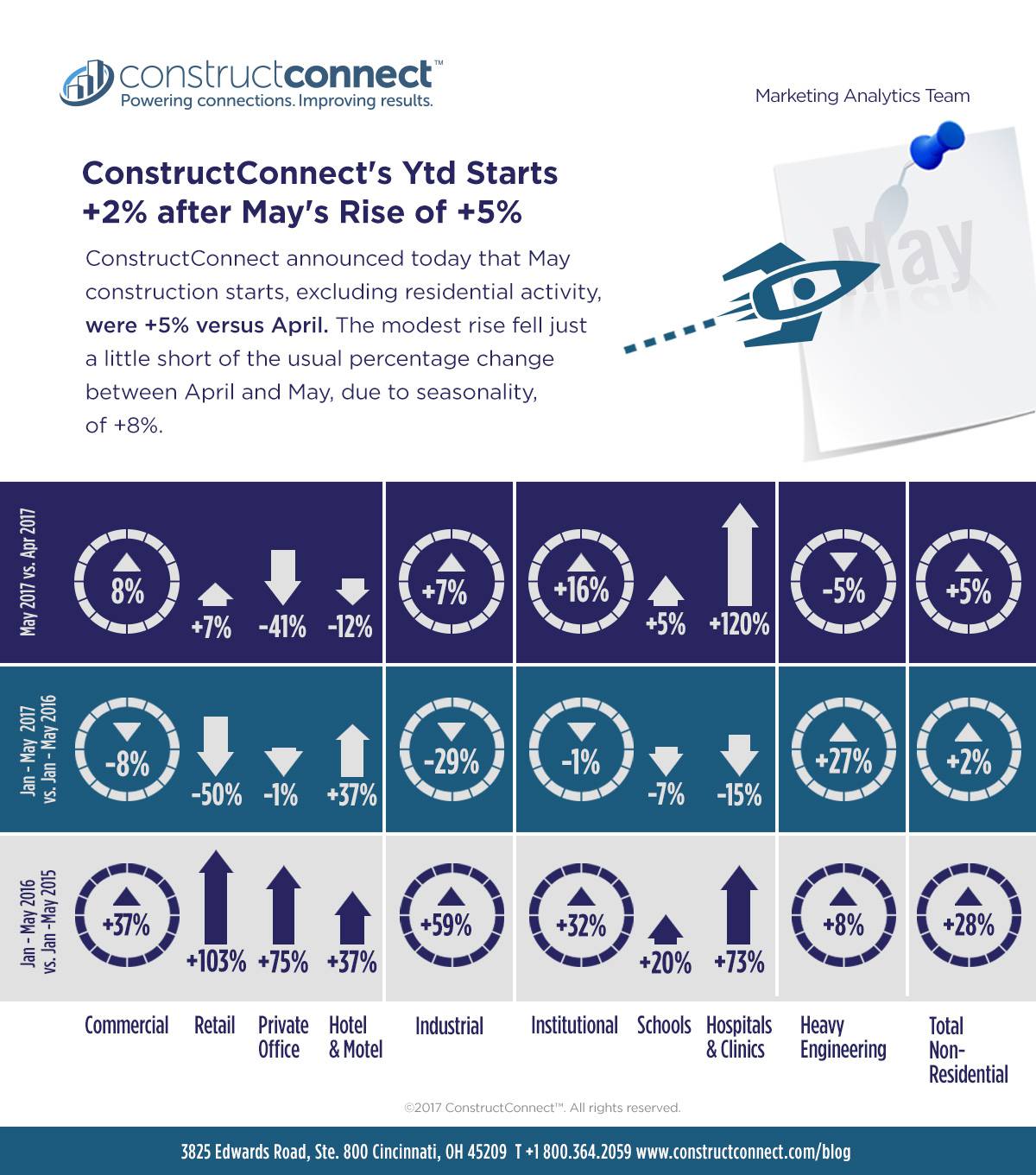 Jobs in U.S. construction moved higher by +11,000 in May, after staying flat in April and March, according to the latest Employment Situation Report from the Bureau of Labor Statistics (BLS). Thanks to strong hiring by the sector in January (+34,000 jobs) and February (+54,000 jobs), monthly average jobs creation in construction so far this year has been +20,000, a decent improvement over last year’s January-to-May average of +12,000.

Month-to-month employment in architectural and engineering services has shown no movement for two periods in a row, but the year-over-year jobs change in the design professions has been a commendable +3.1%. Turning owners’ capital spending wishes into visualizations and then creating ‘assembly instructions’ are key initial steps prior to work proceeding at job sites.

The 12-month moving average trend graphs are a mix of downward-sloping curves for nonresidential building starts that are counterbalanced by upward-sloping patterns for heavy engineering starts. Within nonresidential building work, institutional is holding steady, but commercial is in decline. Retail’s descent has been especially severe. Within engineering, a long rising incline for bridges has become steeper of late and roads/highways have taken a sharp turn for the better to this point in 2017.

For all workers in the economy, year-over-year average wage gains in May were +2.5% both hourly and weekly. Construction workers were in close alignment. Their average hourly earnings were +2.2% y/y and their average weekly earnings, +2.5% y/y. For all workers not including supervisory personnel, both average hourly and average weekly wage gains in May were +2.4% y/y. Nonboss construction workers did better at +2.5% hourly and +3.3% weekly.

Click here for the Nonresidential Construction Starts Trend Graphs - May 2017.