ConstructConnect announced today that November’s volume of construction starts, excluding residential activity, was $25.8 billion. The month-to-month change versus October was -27.8%. Compared with November of 2016, though, this year’s latest month was about even, -0.7%. 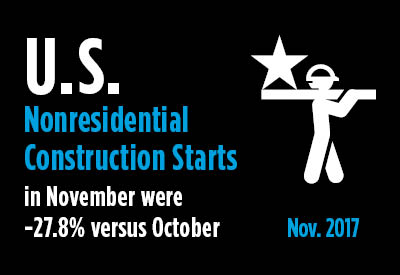 The latest month’s starts included three mega projects of more than a billion dollars each totaling $4.3 billion. But that $4.3 billion still fell far short of the volume of mega project initiations that occurred in September and October. There were four projects in those two earlier months – a pipeline; an airline terminal; and two petrochemical plants − that combined for $23 billion.

November 2017’s starts relative to November’s average value in the previous-five-years, 2012 through 2016, was -0.5%. On the plus side, year-to-date starts have stayed upbeat. For January-November of this year, they have been +11.5% compared with the first eleven months of 2016.

‘Nonresidential building’ plus ‘engineering/civil’ work accounts for a larger share of total construction than residential activity. The former’s combined proportion of total put-in-place construction in the Census Bureau’s October report was 58%; the latter’s was 42%.

The total number of jobs in construction rose by +24,000 in November according to the latest Employment Situation report from the Bureau of Labor Statistics (BLS). The average monthly increase in ‘hard hat’ employment so far this year has been +16,000, a nice advance from 2016’s January-to-November figure of +13,000. Construction’s unemployment rate now sits at 5.0%. A year ago, it was 5.7%. The year-over-year performance of jobs in construction is presently +2.7%. Within subsectors, positions with residential specialty trade contractors are especially buyant, +3.6% year over year. Total employment in the U.S. economy is +1.4% year over year.

There have also been healthy year-over-year increases in employment in some other corners of the economy with close ties to construction. Staffing with real estate firms is +2.0% and with building material and garden supply stores, +2.2%. Most significant, however, is architectural and engineering services employment, +3.5%. Design work is a leading indicator for on-site activity since a set of assembly instructions must be compiled before construction can proceed.

November’s month-to-month (m/m) decline in overall starts (-27.8%) resulted from a big drop in the industrial type-of-structure category (-97.1% -i.e., there was no replacement for October’s outsized Shell petrochemical plant in Pennsylvania), with substantial declines in commercial (-29.1%) and institutional (-25.0%) as well. Heavy engineering, however, moved higher (+18.1%).

The six graphs show 12-month moving average trend lines for major type-of-structure categories. Over the past year (and sometimes more), ‘private offices’ and ‘hospitals’ have been easing, ‘retail’ has been plummeting, and ‘bridges’ and ‘miscellaneous civil’ have been soaring.

The degree of restraint in year-over-year wage gains in the U.S. continues to be a surprise given that the nation’s total labor force unemployment rate of 4.1% is at a seventeen-year low. As recorded in Table B-3 of November’s Employment Situation report, average hourly and average weekly earnings for all workers, including supervisory personnel, were +2.5% y/y and +3.1% y/y respectively. For construction specifically, both the hourly and weekly jumps were +2.9% y/y.

Table B-8 of the BLS’ report is only for production and nonsupervisory employees (i.e., it leaves out bosses). B-8 shows November’s economy-wide earnings at +2.3% y/y hourly and +2.6% y/y weekly. Construction has been doing better hourly, +2.7%, but worse weekly, +2.2%.