ConstructConnect announced today that September’s level of U.S. construction starts, excluding residential work, was $26.4 billion, a month-to-month change of -20.5% versus the period before. The drop was considerably greater than the usual August-to-September decline, due to seasonality, of -3.0%. During the 12 months of the year, the month-to-month tendency, due to seasonality, is positive in March through July, then negative in August through February. 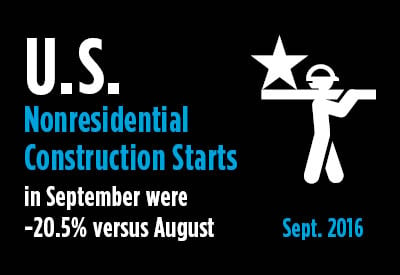 ‘Nonresidential building’ plus ‘engineering/civil’ work accounts for a considerably larger share of total construction than residential activity. The former’s combined proportion of total put-in-place construction in the Census Bureau’s August report was 60%; the latter’s was 40%. 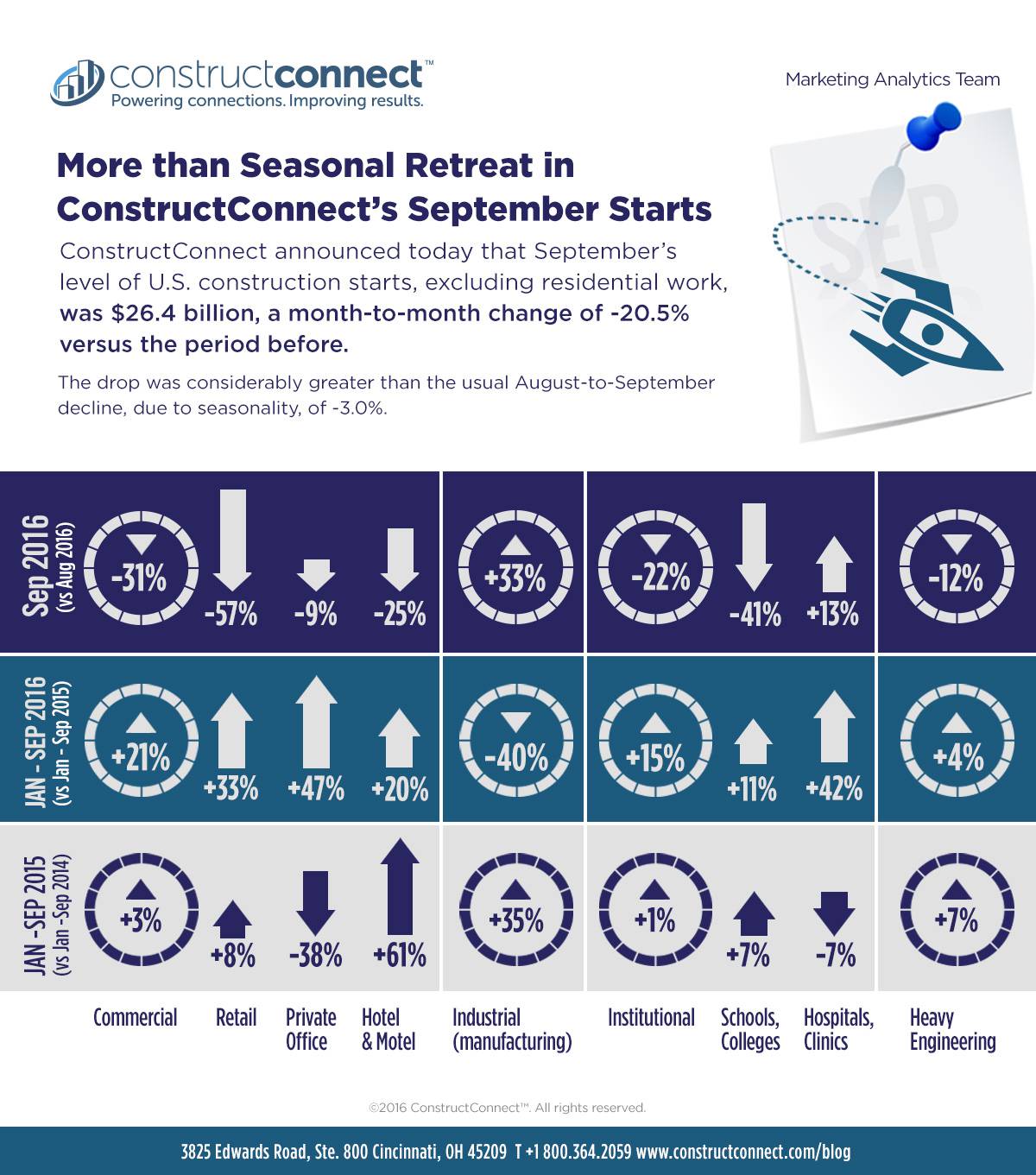 The Bureau of Labor Statistics (BLS), in its latest Employment Situation Report, records a nice jump in the number of construction jobs in September, +23,000. The average monthly gain in the sector so far this year has been +8,000. Although that is down from +17,000 for the first three quarters of last year, the jobless rate in construction has now fallen to 5.2%, which is tighter than the 5.5% at the same time in 2015. The economy-wide unemployment rate is presently 5.0%.

Year-over-year employment in construction is presently +3.4%, which is double the pace for all jobs in the economy, +1.7%. There are two other data series with close ties to ‘hard hat’ activity that appear in Table B-1 of the monthly Employment Situation Report. As a ‘leading’ indicator, – i.e., before there can be field activity, projects must be rendered into working drawings by design professionals − the total number of jobs in architectural and engineering services in September was +2.2% year over year. And as a ‘coincident’ indicator, the total number of positions at retail outlets specializing in selling building materials and supplies was a quite buoyant +4.1%.

The most severe decline in month-to-month starts in September occurred in the commercial type-of-structure category (-31.3%). At the same time, neither institutional (-21.6%) nor heavy engineering/civil (-12.3%) starts escaped unscathed. Only the smaller-volume category of industrial recorded an increase (+32.9%), but it should be noted that this kind of work can often display wild percentage swings depending on the presence or absence of a mega project or two.

Table 2 on reorders and provides more detail on some of the type-of-structure categories in Table 1. The reasons for this ‘second view’ are set out in the footnote.

Among the 12-month trend graphs, ‘bridges’ is the category most clearly maintaining an upward trek, while ‘roads/highways’ and ‘miscellaneous civil’ are stepping off a ledge. ‘Retail’ has also had a sharp correction, but that’s only for one observation point. Results from a few more months will be needed before a definitive determination as to direction can be made.

In the earnings data included with September’s Employment Situation Report, a fair amount of separation appeared between the compensation levels for workers in construction versus those throughout the entire labor force. For all workers in the U.S. economy, year-over-year average hourly and weekly wages were +2.6% and +2.3% respectively. For construction jobs, the comparable percentage changes, both hourly and weekly, were +3.4%. Exclusive of supervisory personnel, the differences were far more dramatic. For all workers (omitting bosses), wages were +2.7% hourly and +2.0% weekly. In construction, the pay hikes were +5.1% and +5.6%.

A “start” is determined by taking the announced bid date and adding a short time lag (30 to 60 days). ConstructConnect continues to follow the project via its network of researchers. If it is abandoned or rebid, the start date is updated to reflect the new information.

Click here for the Top 10 featured construction projects in the U.S. - September 2016.

ConstructConnect’s Increase in May Starts Stuck to the Seasonal Pattern