ConstructConnect announced today that December’s volume of construction starts, excluding residential work, was $28.6 billion, a minor pullback of -1.7% compared with the level achieved in the preceding month of November. The long-term history of change in starts volumes between November and December, due to seasonality (i.e., worsening weather conditions), has been -5.0%. Nonresidential starts in December 2018 relative to December 2017 were +16.9%. 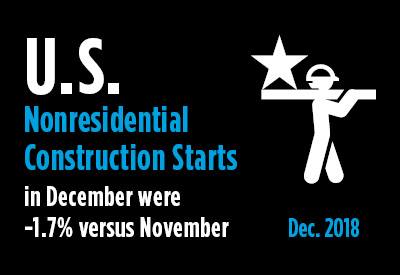 ‘Nonresidential building’ plus ‘engineering/civil’ work accounts for a larger share of total construction than residential activity. The former’s combined proportion of total put-in-place construction in the Census Bureau’s latest report, for October, was 59%; the latter’s was 41%. 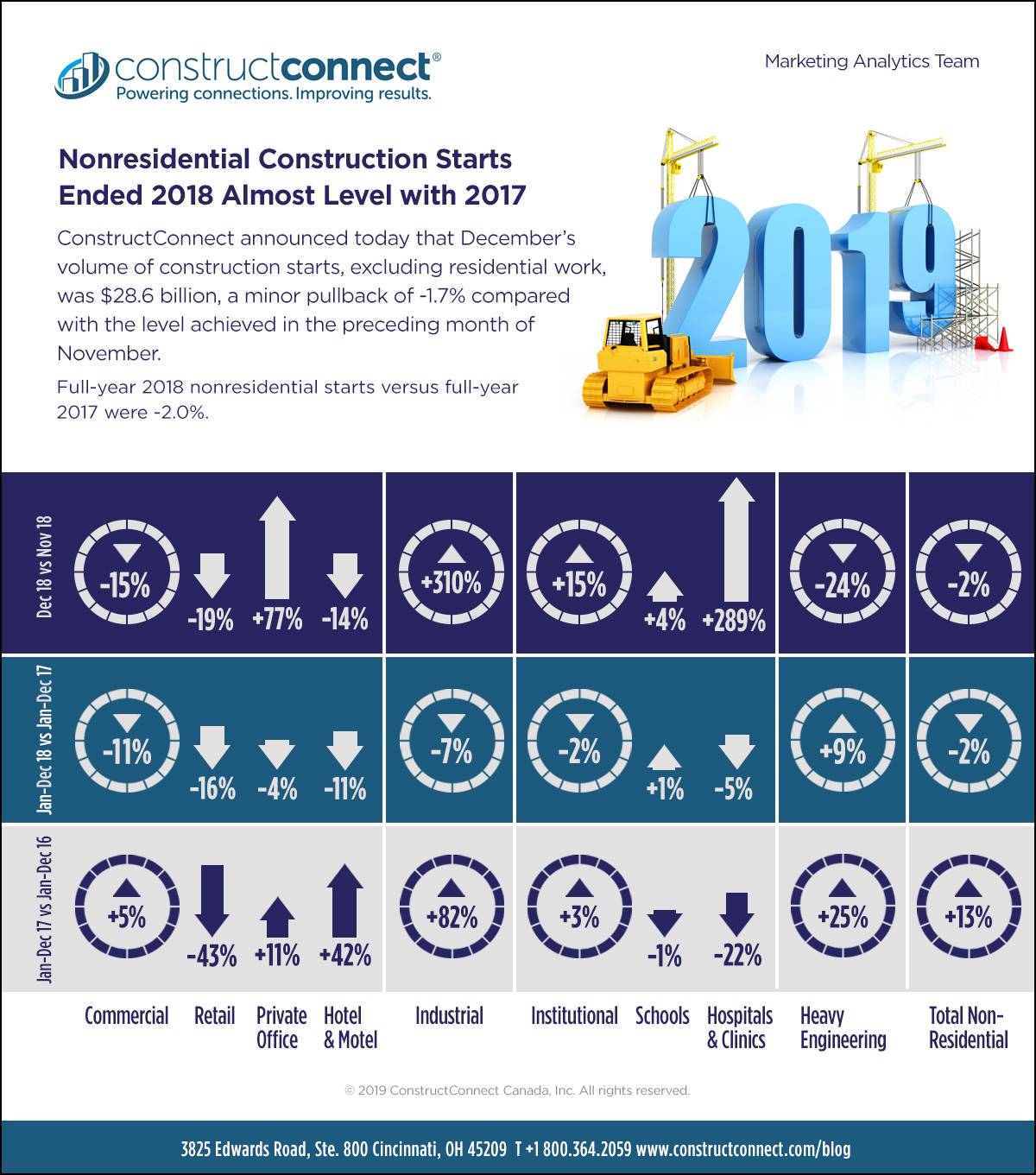 ConstructConnect’s construction starts are leading indicators for the Census Bureau’s capital investment or put-in-place series. Also, the reporting period for starts is usually one month ahead of the reporting period for the investment series. At present, however, that one-month gap has been extended due to an extraordinary circumstance. One fallout from the partial federal government shutdown has been an absence of Census Bureau workers to process the November put-in-place numbers. With respect to some other key data releases, the Bureau of Labor Statistics (BLS) is still managing to keep tabs on jobs growth, unemployment and inflation.

On a percentage-change basis, U.S. construction sector employment in December was +4.0% year over year. The latest annual staffing changes in other pockets of the economy important to construction were: ‘machinery and equipment rental’, +9.2%; ‘oil and gas extraction’, +7.1%; ‘architectural and engineering services’, +3.0%; ‘real estate firms’, +2.5%; ‘building material and supplies dealers’, +0.4%; and ‘cement and concrete product manufacturing’, +0.2%.

The slight dip of -1.7% month-to-month (m/m) in total nonresidential starts in December resulted from commercial (-15.2%) and engineering (-23.9%) downturns that weren’t quite matched by an improvement in institutional (+14.9%) and a big jump in industrial (+310.4%). Industrial can display a big swing depending on the timing of a mega project.

The Nonresidential Construction Starts Trend Graphs – December 2018 sets out 12-month moving average trend graphs for many of the key type-of-structure subcategories. ‘Retail’ is tapering off badly, as shopkeepers continue to replace bricks-and-mortar locations with web-based selling platforms.  ‘Miscellaneous civil’ has also been diving of late, but that’s after skyrocketing higher in 2017 and first-half 2018. Its present lower perch is still well above historical norms. ‘Roads’ and ‘bridges’ are maintaining their upward treks.

In December, the four economy-wide compensation increases were all in a range of +3.0% to +3.5%. Including bosses (Table B-3), both average hourly and average weekly pay hikes were +3.2%. Excluding bosses (Table B-8), average hourly earnings were +3.3% and average weekly earnings, +3.0%. For construction workers alone (i.e., as a subset of all workers), the earnings advances in December lay between +3.9% y/y and +4.5% y/y. Including supervisory personnel, average hourly and weekly pay raises for on-site employees were +3.9%. Excluding supervisory personnel, construction paycheck flows were even frothier, at +4.2% hourly and +4.5% weekly.