A Slow Beginning for 2019 Construction Starts

ConstructConnect announced today that January’s volume of construction starts, excluding residential work, was $27.8 billion, a change of -6.7% compared with December 2018’s level of $29.7 billion. The latest month-to-month adjustment was in close alignment with the usual shift in starts volumes between December and January, due to seasonality, of -8.5%.

‘Nonresidential building’ plus ‘engineering/civil’ work accounts for a larger share of total construction than residential activity. The former’s combined proportion of total put-in-place construction in the Census Bureau’s latest report, for November, was 59%; the latter’s was 41%. 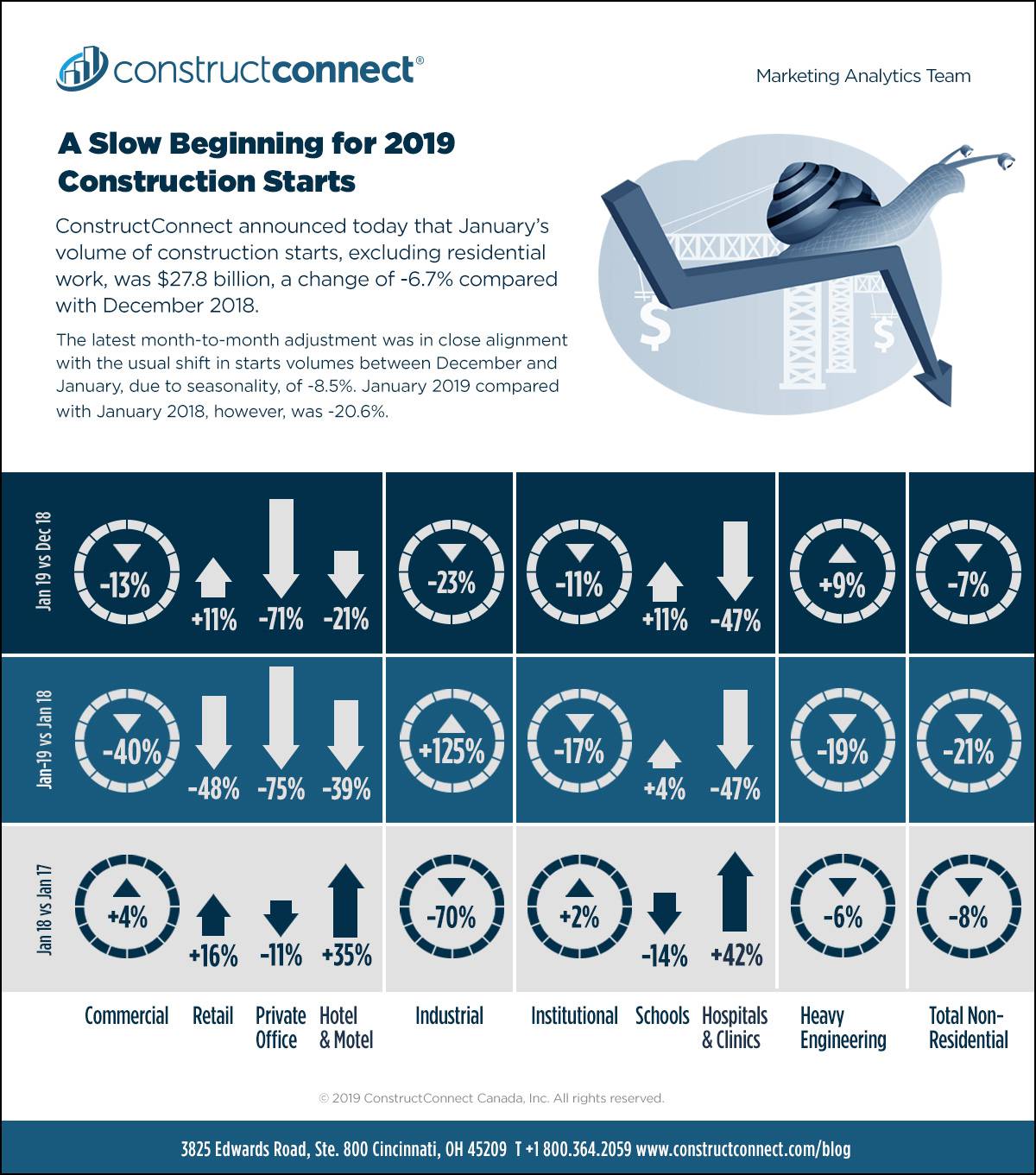 ConstructConnect’s construction starts are leading indicators for the Census Bureau’s capital investment or put-in-place series. Also, the reporting period for starts is usually one month ahead of the reporting period for the investment series. The normal one-month lag in the timing of data releases has currently been stretched out. Census Bureau workers were off the job for 35 days due to the partial shutdown. Now that they have returned to work, the put-in-place numbers have been updated through November, which leaves them two months behind the starts data.

The U.S. construction sector (+52,000 jobs) undertook exceptionally strong hiring in January, according to the latest Employment Situation report from the BLS. The year-over-year change in construction jobs was +4.7%, a faster pace of gain than for any other major industrial subsector. ‘Transportation and warehousing’ (+4.1%) firms were next quickest to add staff. By sub-categories of construction work, the year-over-year climb in jobs was +7.2% for both residential and heavy/civil engineering concerns. Nonresidential builders were more restrained, at +2.9%.

January 2019’s year-over-year payroll changes in other pockets of the economy important to construction were as follows: ‘machinery and equipment rental,’ +6.9%; ‘oil and gas extraction,’ +6.2%; ‘real estate firms,&rsquo, +3.3%; ‘architectural and engineering services,&rsquo, +2.5%; ‘cement and concrete product manufacturing,&rsquo, +0.9%; and ‘building material and supplies dealers,&rsquo, -0.3%.

For every month of the year except January, the narrative in this Industry Snapshot report would now move along to a discussion about year-to-date results. But January is unique in that its individual monthly numbers and its year-to-date (ytd) statistics are exactly the same.

The -23.3% drop in industrial starts m/m in January 2019 was due to the absence of a project as large as Micron Technology’s plant expansion in Virginia, estimated at $3.0 billion, which appeared in December 2018’s starts. January 2019 groundbreakings did, however, include several notable industrial projects, led by an ethane exporting facility in Texas, valued at $1.5 billion. On a y/y basis, January 2019 industrial starts were +125.3%.

By a wide margin, the front-ranking share (57%) among institutional subcategories in January belonged to ‘schools/colleges’. Furthermore, the dollar volume of educational facility starts-ups in the latest month was notably positive: +10.6% m/m and +4.1% y/y. The dollar-volume starts performance of a combined medical facility subcategory, – i.e., embracing ‘hospitals/clinics,&rsquo‘nursing/assisted living,’ and ‘medical miscellaneous’ (and jointly accounting for 31% of institutional in January 2019) was deeply negative: -26.0% m/m and -43.4% y/y.

The Nonresidential Construction Starts Trend Graphs – January 2019 sets out 12-month moving average trend graphs for key type-of-structure categories. In Graph 1, the nonresidential building curve is gently descending while heavy engineering is gradually ascending. In Graph 2, the commercial and institutional lines are almost on top of one another, with mild weakness developing in 2018. In Graphs 3 through 6, the structure types showing the most uplift of late have been roads/highways and bridges. Those demonstrating a tendency to retreat have been retail and hospitals/clinics. ‘Miscellaneous civil’ in Graph 6 is coming back down to earth but remains one-third higher than its best levels from 2010 to 2015.

From January’s Table B-3, the ‘all jobs’ pay increases were +3.2% hourly and +3.5% weekly. Construction workers did worse hourly, +2.8%, but considerably better weekly, +4.9%. From Table B-8, which omits supervisory personnel, the economy-wide compensation increases were +3.4% hourly and +3.7% weekly. Again, construction workers, as a subset, fell behind (but only slightly) in their hourly earnings, +3.3%, but they more than made up for it weekly, +5.6%.

Table 1 conforms to the type-of-structure ordering adopted by many firms and organizations in the industry. Specifically, it breaks nonresidential building into ICI work (i.e., industrial, commercial and institutional), since each has its own set of economic and demographic drivers. Table 2 presents an alternative, perhaps more user-friendly and intuitive type-of-structure ordering that matches how the data appears in ConstructConnect’s online product Insight.