ConstructConnect announced today that March construction starts, excluding residential activity, were +17.8 versus February. The long-term February-to-March advance, due to seasonality, has been only +2.5%. It’s usually not until April that more accommodating weather causes a big lift in volume of about +12.0%. Spring has apparently come early for groundbreakings this year. 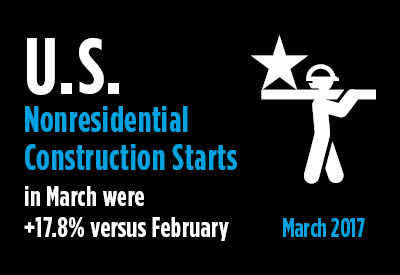 ‘Nonresidential building’ plus ‘engineering/civil’ work accounts for a considerably larger share of total construction than residential activity. The former’s combined proportion of total put-in-place construction in the Census Bureau’s February report was 60%; the latter’s was 40%. 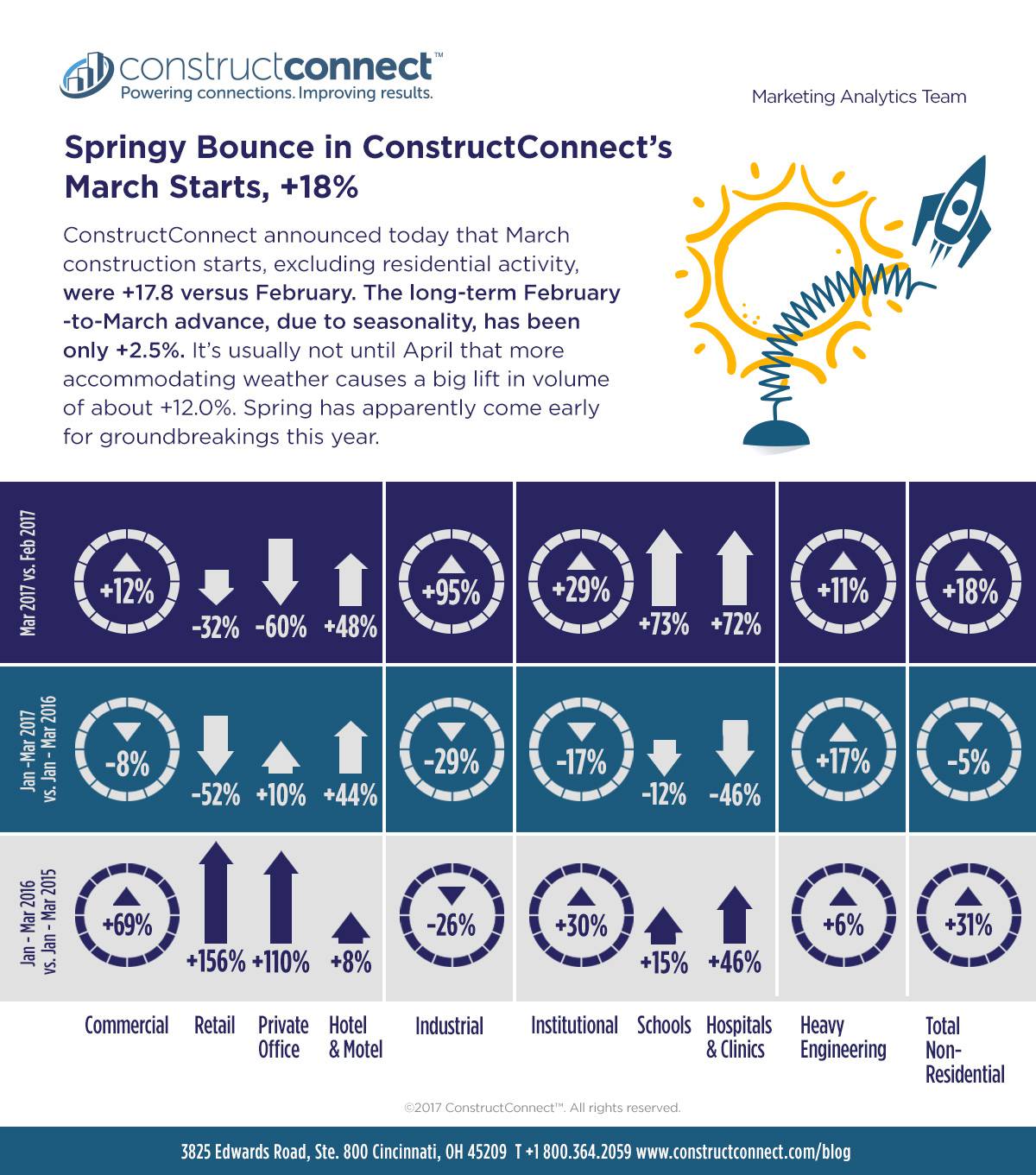 Employment in construction advanced only slowly in March, +6,000 jobs, according to the latest Employment Situation Report from the Bureau of Labor Statistics (BLS). Thanks to strong gains in January (+34,000) and February (+59,000), however, the average monthly climb in on-site work through the first quarter of this year, at +33,000, has been +29% relative to last year’s Q1.

Year-over-year employment in construction is presently +2.6%, which is a significant retreat from a recent high of +6.1% in late 2014, but it is well ahead of the all-jobs gain of +1.5%. By way of comparison, manufacturing and retail employment are only +0.3% and +0.4% year over year respectively. ‘Professional and business services’ employment, though, is better at +3.2%. The NSA jobless rate in construction is now 8.4%, somewhat tighter than March of 2016’s 8.7%.

Among the many data series appearing in Table B-1 of the monthly Employment Situation Report are several with construction connections. The total number of jobs in architectural and engineering services in the latest month was +3.3% year over year. Staffing in the ‘real estate’ sector, which includes developers, was +3.5% year over year. The payrolls of ‘building material and supplies dealers’ was a quiet +1.2%. And note should also be made that in the resource sector, the number of workers engaged in ‘oil and gas extraction’, while still down year over year (-1.3%), was finally headed back up month over month, +1.0% in both February and March.

February’s big step forward in starts (+17.8%), month-to-month (m/m), arose from increases in all three major type-of-structure categories. Institutional (+28.6%) was out front, with commercial (+12.4%) and heavy engineering/civil (+11.0%) following and almost in a tie. The smaller-volume category of industrial, which can display extreme percentage-change volatility brought on by the presence or absence of a mega project or two, was +94.5%.

Also important in the heavy engineering/civil type-of-structure category is bridge work, which chalked up outstanding numbers in March: +81.4% m/m; +40.5% y/y; and +30.5% ytd.

The 12-month moving average trend graphs show nonresidential building starts coming off their not-so-long-ago peak, while heavy engineering starts are in a possibly early stage of heading up. Within nonresidential building work, both commercial (especially retail) and institutional have been departing negatively from previously upward paths. ‘Roads/highways’, ‘water/sewage’ and ‘bridges’ are all swinging higher in heavy engineering. Only ‘miscellaneous civil’, which encompasses oil and gas and electric power work, is diving.

To the surprise of many, given that March’s economy-wide jobless rate of 4.5% was the best it’s been since before the Great Recession, year-over-year earnings remained restrained. For workers across all industries, including supervisory personnel, March’s year-over-year increase in average hourly earnings was +2.7% and in average weekly earnings, +2.4%. The comparable figures for construction on its own were the reverse, +2.4% hourly and +2.7% weekly.

Leaving out bosses, average year-over-year earnings economy-wide were +2.3 hourly and +2.0% weekly. The standalone construction sector was a little higher at +2.7% both hourly and weekly.

ConstructConnect’s nonresidential construction starts series, because it is comprised of total value estimates for individual projects, some of which are ultra-large, has a history of being more volatile than many other leading indicators for the economy.

ConstructConnect has now moved to a better-targeted and research assigned ‘start’ date. Prior to January 2017, the ‘start’ date was recorded as occurring within 30 to 60 days of the announced bid date. In concept, a ‘start’ is equivalent to ground being broken for a project to proceed. If work is abandoned or re-bid, the ‘start’ date is updated to reflect the new information.

Click here for the Top 10 featured construction projects in the U.S. - March 2017.