ConstructConnect announced today that October's volume of construction starts, excluding residential activity, was $34.1 billion. The month-to-month change versus September was -23.3%. Compared with October of last year, though, this year’s latest month was +5.1%. 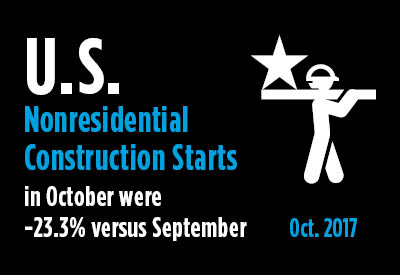 The usual weather-related seasonality played no role in total starts during the latest two months. Instead, the totals for both September and October were driven by groundbreakings on ultra-large projects. September’s data included three mega projects, including a $10 billion petrochemical plant for Exxon Mobil in Texas. Appearing in October’s starts statistics was another petrochemical plant, but this time for Shell in Pennsylvania, valued at $6 billion. 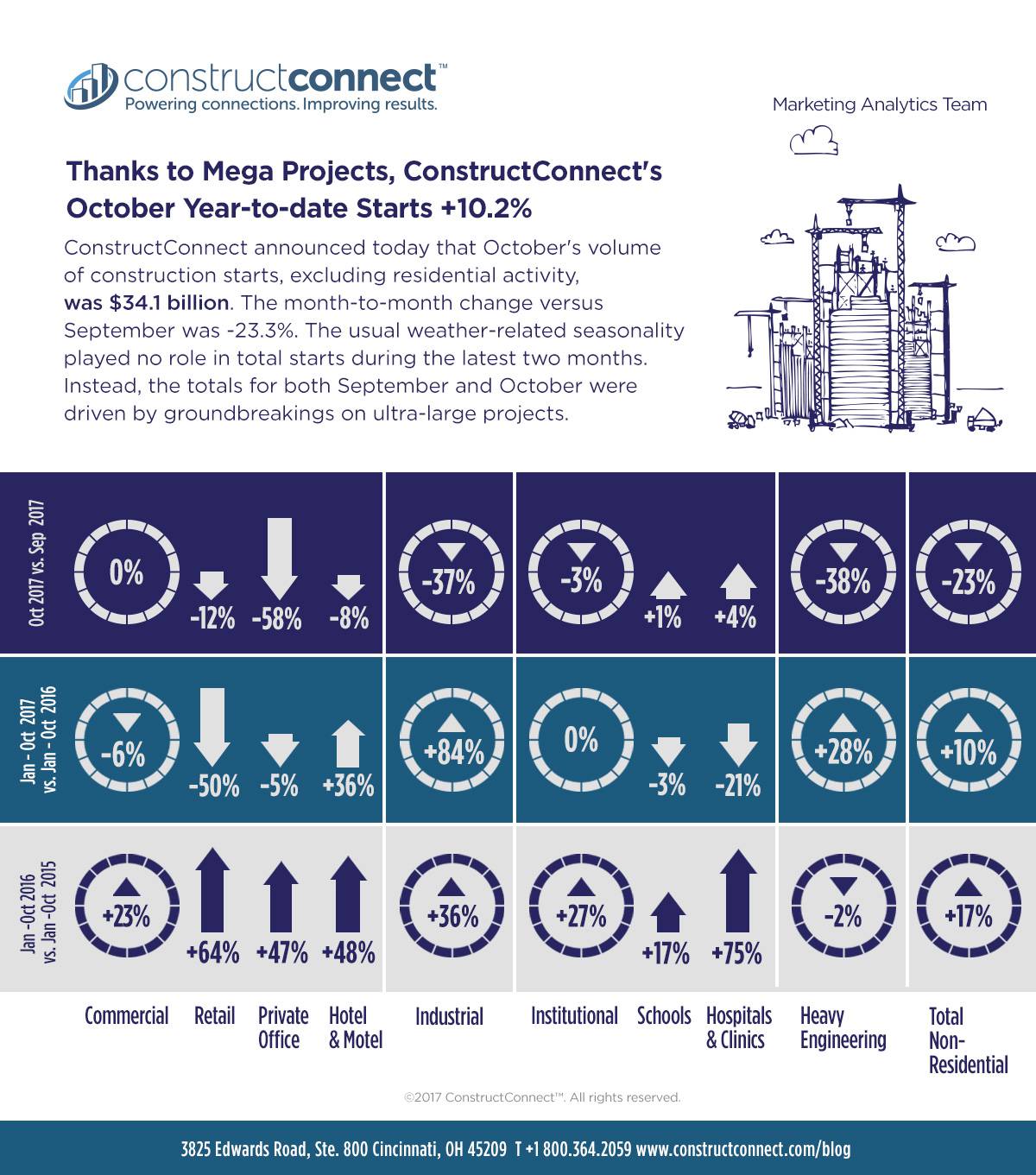 ‘Nonresidential building’ plus ‘engineering/civil’ work accounts for a larger share of total construction than residential activity. The former’s combined proportion of total put-in-place construction in the Census Bureau’s September report was 58%; the latter’s was 42%.

As reported in the latest Employment Situation report from the Bureau of Labor Statistics, the total number of U.S. construction jobs rose by +11,000 in October. This year’s monthly average gain in on-site work has been +15,000, a modest step up from 2016’s +12,000 for January-through-October. In the latest month, the ‘hard hat’ sector’s unemployment rate tightened to 4.5%, down a notch from September’s 4.7% and a significant improvement over October 2016’s 5.7%. The latest month’s 4.5% figure tied it with June of this year and July of last year for lowest construction jobless level in eleven years, dating back to October 2006 (also 4.5%).

U.S. construction’s year-over-year climb in employment, at +2.8%, is occurring at exactly twice the speed of the nation’s total jobs increase, +1.4%. Offering further encouragement for construction firms has been the hiring undertaken by ‘architectural and engineering’ enterprises. Design activity is an out-front predictor, since there can’t be field work without assembly instructions. Largely influenced by homebuilding and renovation efforts, jobs with ‘building material and garden equipment stores’ are +1.9%. And employment in ‘real estate’ is +2.3%.

October’s month-to-month (m/m) overall starts decrease (-23.3%) originated in the heavy engineering (-37.8%) and industrial (-36.9%) type-of-structure categories. Institutional (-3.2%) was down, but to a minor degree, and commercial (+0.1%) was flat. The large negative swings in industrial and civil were due to four mega projects. In industrial, September’s $10 billion petrochemical plant beat October's $6 billion ethane cracker. In civil, September featured a pipeline and an airport terminal, for a combined $7 billion, that had no counterparts in October.

Table 2 of this report reorders and provides more detail on some of the type-of-structure categories in Table 1. The reasons for this ‘second view’ are set out in the footnote.

The six graphs show 12-month moving average trend lines for major type-of-structure categories. In Graph 1, the ‘nonresidential building’ curve has straightened out despite ‘institutional’ and ‘commercial’ tailing off in Graph 2. A big spike in industrial starts (not shown separately in any of the graphs) has come to the rescue. Also, ‘heavy engineering’ has been trending upwards, aided by ‘airport’, ‘bridge’ and ‘miscellaneous civil’ (e.g., pipeline) starts, even as ‘roads/highways’ and ‘water/sewage’ have pulled back from not-so-long-ago peaks.

While there are many ‘anecdotal’ indications of rapidly rising wage rates in pockets of the U.S. economy, they are not being confirmed in the compensation tables (B-3 and B-8) of the BLS’ Employment Situation Report. Table B-3 records both average hourly and average weekly earnings for all workers (including supervisory personnel) throughout the economy to be +2.4% y/y. Construction workers, at +2.3% hourly and +1.7% weekly, aren’t doing as well. Excluding bosses, the all-industry increases are +2.3% hourly and +2.6% weekly. The percentage change for construction workers specifically is the same hourly, +2.3%, but weaker weekly, +1.8%.