After disappointing ‘groundbreaking’ results in the first two months of 2019, March delivered a solidly upbeat change. ConstructConnect announced today that the latest month’s volume of construction starts, excluding residential work, was $35.0 billion (green shaded box, Table 3 below), an increase of +42.6% versus February, and way above the usual gain as winter makes way for spring. 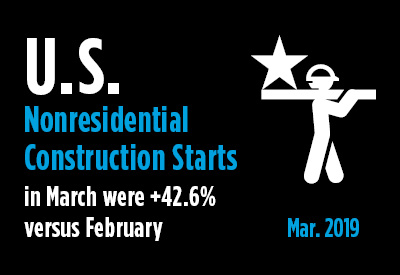 Much of the credit for the surge in starts, month-to-month, goes to initiations of work on several projects with estimated values higher than a billion dollars each (See Top 10 Project Starts in the U.S. - March 2019.).

While the four recent mega project start-ups helped in March’s comparison with February, they still couldn’t lift March 2019 enough to match the same month of last year, which included a $5.5 billion pipeline project. March 2019 nonresidential starts relative to March 2018 were -16.5%.

This latest month, however, was quite close to the ‘norm’ for March in the preceding five years. Compared with the average for March from 2014 through 2018, March 2019 underperformed only slightly, -1.7%. 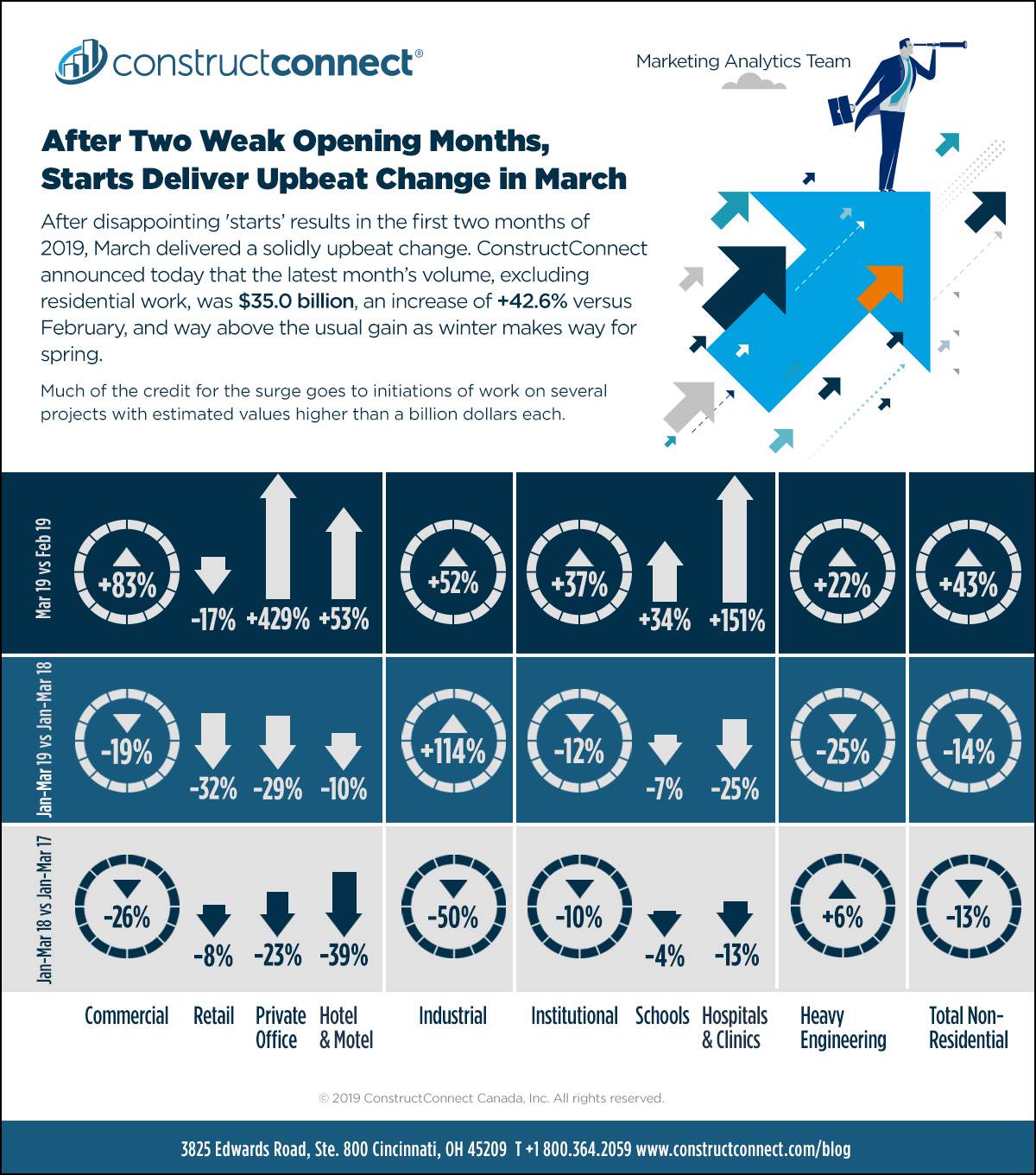 Since large project initiations can often introduce notable volatility in the monthly ‘starts’ numbers and their period-to-period percentage changes, it is informative to also study ‘smoothed’ series, such as are set out in the middle columns of Table 4 below.

‘Smoothed’ grand total starts, which include residential activity, were -3.5%, as residential work showed weakness, -7.9%. Within residential, it was the apartment/condo market (-20.3%) that caught the hiccups far more than the single-family segment (-1.3%)

‘Starts’ as a Leading Indicator:

The ‘starts’ figures appearing in this report’s tables and graphs are not seasonally adjusted (NSA). Nor are they altered for inflation. They are expressed in what are termed ‘current’ as opposed to ‘constant’ dollars.

‘Nonresidential building’ plus ‘engineering/civil’ work accounts for a larger share of total construction than residential activity. The former’s combined proportion of total put-in-place construction in the Census Bureau’s latest report, for February, was 59%; the latter’s share was 41%.

According to the latest Employment Situation report from the Bureau of Labor Statistics (BLS), the U.S. construction sector’s record of employment in the first three months of this year has been varied to say the least: +56,000 jobs in January; -25,000 in February; and +16,000 in March. The monthly average of ‘hard hat’ hiring through the first quarter of this year was +16,000, down by more than half versus the +36,000 figure for Q1 of last year.

Construction has re-taken top spot for fastest year-over-year growth in employment among major industrial sectors. Its +3.4% in March edged out transportation and warehousing’s +3.3%. Also, construction added to payrolls at twice the speed of manufacturing (+1.7%).

Construction’s NSA unemployment rate in the latest month was a tight 5.2%, a full percentage point better than February’s 6.2% and a marked improvement versus March 2018’s 7.4%. (The national jobless rate is 3.9% NSA, but the figure more commonly quoted is 3.8% SA.)

March 2019’s year-over-year staffing changes in other segments of the economy important to construction were as follows: ‘machinery and equipment rental’, +8.6%; ‘oil and gas extraction’, +6.9%; ‘architectural and engineering services’, +3.6%; ‘real estate firms’, +2.6%; ‘building material and supplies dealers’, -1.3%; and ‘cement and concrete product manufacturing’, -1.4%;

The Nonresidential Construction Starts Trend Graphs - March 2019 sets out 12-month moving average trend graphs for key type-of-structure categories. Many of the curves have been flattening out of late, although ‘retail’ continues to descend dramatically. The big plunge in ‘miscellaneous civil’ starts in the latest month was because March 2018’s multi-billion-dollar pipeline project has just dropped out of the moving 12-month average calculation.

In March, the eight percentage changes were all spaced in a remarkably narrow range from +3.0% to +3.6%. There have been improvements in compensation over the past couple of years, but the progress has been slow and construction workers have fared neither worse nor better than their compatriots throughout the labor force.

Job openings Graph 1 below, derived from the Census Bureau’s JOLTS report, highlights why the inertia in wage gains is surprising. Job openings, as both a level and a rate, are at historical highs. Meanwhile, the construction ‘hires’ level (Graph 2), from the same JOLTS report, is barely on an incline, while the construction ‘hires’ rate continues to be flat. Reducing the gap between ‘openings’ and ‘hires’ may soon require heftier monetary incentives.

*Rate is number of hires during month as % of construction employment.
Job Openings and Labor Turnover Survey. Latest seasonally adjusted (SA) data points are for Feb. 2019.