ConstructConnect announced today that the latest month’s volume of construction starts, excluding residential work, was $29.7 billion (green shaded box, Table 3 below), -14.0% versus December 2019’s figure of $34.5 billion (originally reported as $34.0 billion). The decline was greater than the usual step back due to seasonality of -10.0%. ‘Seasonality’ refers to increases or decreases in activity due to favorable or unfavorable weather. Winter qualifies as unfavorable. 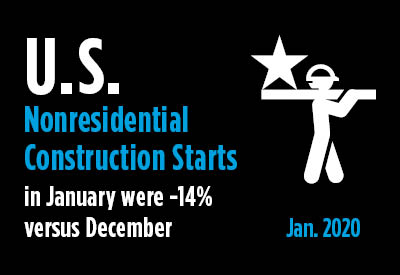 On average, January’s drop relative to December during the most recent five years, from 2015 to 2019, was -6.1%. January is a unique month. It stands alone at the beginning of the year. Based on what has happened previously, most of the shortfall of -6.1% versus prior-five-year-average will likely be recovered as upward revisions to January are made in later months of 2020. 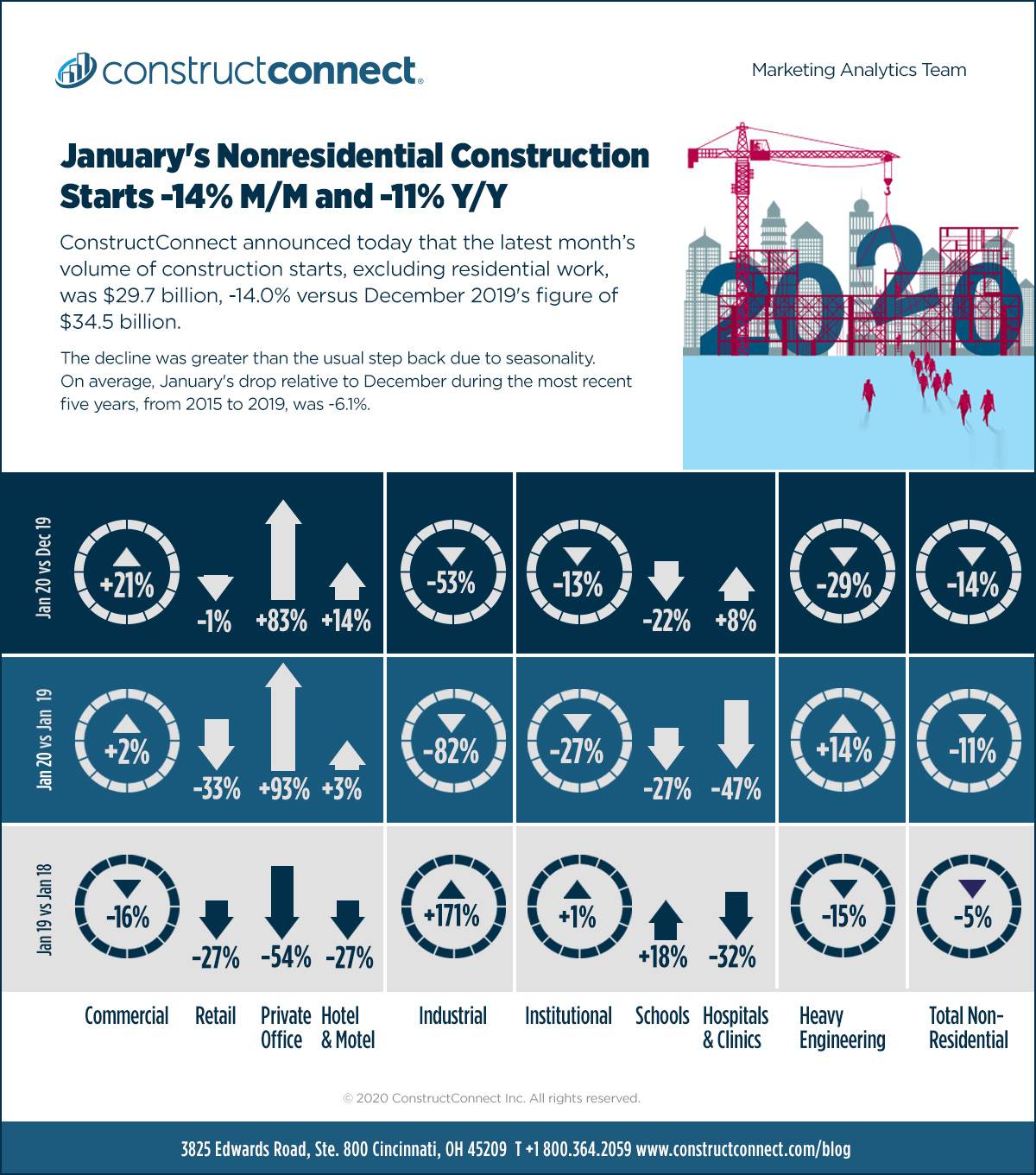 A mega project carries an estimated value of one billion or more. In 2019, ‘megas’ became more prominent in the ‘starts’ statistics. In January 2020, there was only one such project, a ‘people mover’ at Los Angeles airport ‒ i.e., an ‘elevated guideway train system’ as it is described online by LAX.

January 2020 nonresidential starts versus January 2019 were -10.9%. Usually, at this point in the commentary, year-to-date results are featured. But again, January’s unique status comes to the fore. January and year to date are one and the same.

The ‘smoothed’ grand total of starts, which includes residential, was +5.2% in January. As for residential activity, it was -2.0% on a 12-month moving average basis, with more of the drag coming from the multi-family segment (-5.2%) than the single-family market (-0.5%).

‘Nonresidential building’ plus ‘engineering/civil’ work accounts for a larger share of total construction than residential activity. The former’s combined proportion of total put-in-place construction in the Census Bureau’s latest report for December 2019 was 60%; the latter’s was 40%. ConstructConnect’s construction starts are leading indicators for the Census Bureau’s capital investment or put-in-place series. Also, the reporting period for starts (January 2020) is one month ahead of the reporting period for the investment series (December 2019).

U.S. total construction employment in January was +44,000 jobs versus December’s level. While the +44,000 compares favorably with the monthly average of only +12,000 achieved throughout last year, it loses luster when held up against January 2019’s figure of +50,000. January 2019’s strength, however, did not hold for the remainder of the year. Particularly in the second half of 2019, there were many instances of weak month-to-month change.

Among major sectors of the economy, construction’s year-over-year jobs growth in January 2020 was tied for second place with ‘transportation and warehousing’ and ‘leisure and hospitality’ at +1.9%. ‘Education and health’ claimed top spot at +2.6%. Total U.S. employment was +1.4%. Construction’s NSA unemployment rate in the latest month was 5.4%, up from December 2019’s 5.0%, but an improvement on January 2019’s level of 6.4%.

The latest year-over-year job count changes in other corners of the economy with close ties to construction have been: ‘oil and gas extraction,’ +11.2%; ‘machinery and equipment rental,’ +7.6%; ‘real estate activities,’ +3.0%;  ‘architectural and engineering services,’ +2.0%; ‘cement and concrete product manufacturing,’ +1.8%; and ‘building material and supplies dealers,’ +1.4%.

As for the -10.9% drop in total nonresidential starts in latest January versus year-ago January (y/y), industrial (-81.5%) and institutional (-26.5%) were the culprits, as heavy engineering made a positive contribution (+13.9%) and commercial was a bit better than flat (+1.9%)

‘Schools/colleges’ normally account for at least half of institutional starts and they crossed that bar again in January 2020, with a 52% share. Nevertheless, educational facility starts in the latest month were -21.5% m/m and -27.4% y/y. Health care facility starts, as a combination of the ‘hospital/clinic,’ ‘nursing/assisted living,’ and ‘miscellaneous medical’ subsegments, were 23% of institutional in January 2020. In percentage-change terms, they were -28.1% m/m and -52.7% y/y. ‘Hospital/clinic’ starts as a standalone subcategory were +7.7% m/m, but -47.4% y/y.

JOLTS measurements, as ‘level’ and ‘rate,’ appearing in Graph 1 highlight that while job openings in the construction sector are still relatively elevated, they have been tracking a downward path for nearly the past year. From Graph 2, ‘hires’ have picked up nicely over the past little while, although not as markedly in the latest month, and they are still not that extraordinary when compared with earlier periods, especially prior to the 2008-09 recession. Less than stellar JOLTS results help explain why construction workers aren’t currently reaping big earnings increases.

The Nonresidential Construction Starts Trend Graphs - January 2020 showcase six graphs featuring 12-month moving averages for a dozen type-of-structure categories. From Graph 1, both the nonresidential building and heavy engineering curves have been moving upwards, the former somewhat more emphatically than the latter. Graph 2 shows starts volumes for commercial and institutional work to be almost tied, while also flattening over the last three years. According to Graph 3, ‘private office building’ starts have turned in a 10-year stretch of strength, but ‘retail’ has been in a steep dive since mid-2016.

In Graph 4, the buoyancy in ‘school/college’ starts is apparent, while ‘hospital/clinic’ initiations have been going nowhere. Graph 5 has ‘roads/highways’ doing better than ‘water/sewage’ after both were at the same level in January 2005. And finally, from Graph 6, ‘bridge’ starts have been through a period of solid improvement, but their success is currently being overshadowed by a surge in ‘miscellaneous civil’ undertakings. ‘Miscellaneous civil’ includes power, pipeline, rapid transit, and railroad projects.

*Rate is number of hires during month as % of construction employment.
Job Openings and Labor Turnover Survey. Latest seasonally adjusted (SA) data points are for November, 2019.

Construction’s Relative Wage Gains – Not Much Reason to Celebrate

From January’s BLS Table B-3 (including supervisory personnel), the ‘all-jobs’ year-over-year earnings increases were +3.1% hourly and +2.5% weekly. Construction workers, as a subset of ‘all jobs,’ fared okay hourly, at +2.9%, but trailed badly weekly, +0.8%. From BLS Table B-8, (leaving out bosses), economy-wide workers realized pay gains of +3.3% hourly and +2.7% weekly. Construction workers, at +2.5% hourly and only +0.7% weekly, had significantly less reason to celebrate.

Construction Costing ‒ 3 Small Shifts: Down, Up, and Down

Table 1 conforms to the type-of-structure ordering adopted by many firms and organizations in the industry. Specifically, it breaks nonresidential building into ICI work (i.e., industrial, commercial and institutional), since each has its own set of economic and demographic drivers. Table 2 presents an alternative, perhaps more user-friendly and intuitive type-of-structure ordering that matches how the data appears in ConstructConnect Insight.