Nonresidential Construction Starts -13.4% YTD in Q1, But Where to Now?

Under the Circumstances, March Starts Stats Held up Well

The month-to-month gain was due to school projects (+62.8%) and engineering works (+59.3%). March can often be the first month in the year when there is a pick-up in construction activity thanks to more favorable weather, as winter’s frostiness gives way to spring’s balmier breezes. 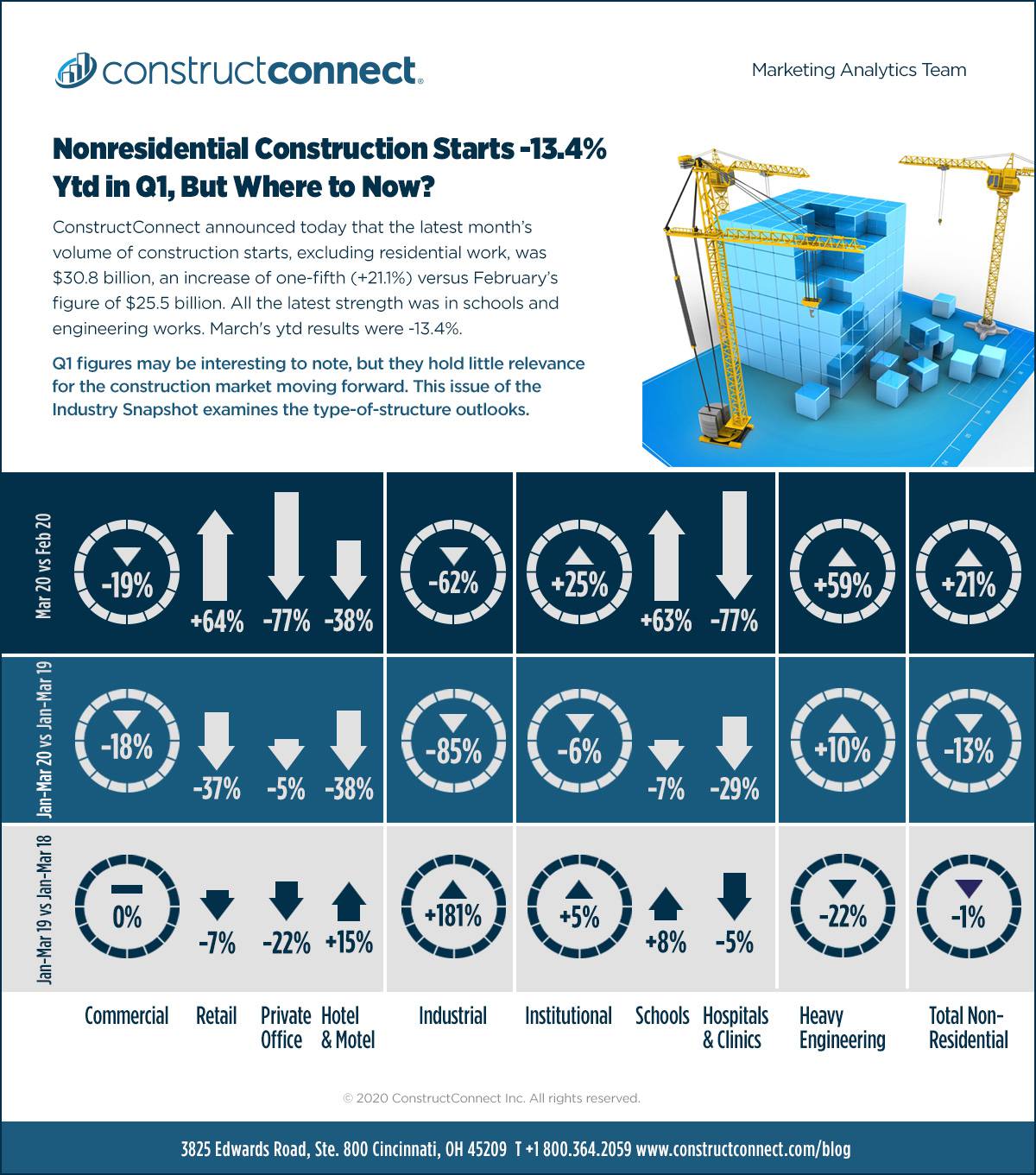 March 2020 nonresidential starts may have been up versus February, but they were no match for March of last year, -25.8%. Furthermore, at -20.2%, they failed to keep up with the average for March over the five-year period 2015 to 2019 inclusive.

The foregoing may be interesting to note, but it holds little relevance for the construction market moving forward. Nor is there much point in proceeding through this current Industry Snapshot checking off the same topic boxes (e.g., JOLTS results) as in previous versions. Due to the coronavirus crisis, the general economy and its accompanying construction scene are undergoing negative change with too great rapidity.

The extraordinary extent and swiftness of the deterioration are captured in Graph 1. Over just the latest three weeks, initial jobless claims in the U.S. have reached a cumulative 16.8 million. The weekly tallies have been 3.3, 6.9, and 6.6 million. The worst week in the 2008-2009 recession yielded a figure of 670,000, which has been rendered minuscule by the numbers now being generated.

Graph 2 shows the dramatic drop in the ‘official’ total number of jobs in March (-710,000) as reported in the latest Employment Situation report published by the Bureau of Labor Statistics (BLS). The numbers in Graph 1, however, make clear that Graph 2 doesn’t come even close to showing the jobs carnage that will be apparent when April’s employment results are released in early May.

Graph 2 is based on figures derived from a survey of employers conducted in the first half of March. There was a falling-off-the-cliff moment in the middle of the month. The early-March job losses were almost entirely in the ‘hospitality and leisure’ sector (e.g., hotels, restaurants, and bars). The layoffs and furloughs since then have widened and deepened across multiple sectors.

Construction employment in March was down by -29,000 jobs. But the sector’s year-over-year employment performance remained positive, at +2.2%.

The U.S. total jobs change in March was still slightly positive, +1.0%. March data, however, has become way out of date. Semi-comforting news has been replaced by all-out alarm.

The national unemployment percentage rate will almost certainly soar into the high teens and ‘real’ (i.e., after inflation) gross domestic product (GDP) change will sink by a fifth to a quarter (annualized) in Q2. If the pandemic has run its course by mid-summer, there is hope for cheerier news in late fall, as massive stimulus expenditures and quantitative easing build fuller momentum.

A more productive exercise than looking at how the starts have been performing through March, is to consider what their prospects are, by type of structure, into early 2021.

Residential ‒ The surge in job losses, with accompanying declines in income (partially offset by government earnings supplement plans), will take away the confidence needed to go ahead with new home purchases. Also, with shelter-in-place guidelines in effect, ‘open houses’ and model home visits are being curtailed. Some sales will proceed regardless, as the most intrepid (or desperate) buyers shop and finalize transactions online.

American housing starts, which were perking up nicely at the tail-end of 2019 and into the early days of 2020, will disappoint for the rest of the year. The massive shift towards working from home that is underway may alter the singles-versus-multiples balance in favor of the former, since one of its former chief negatives, commuting, has been taken off the board.

There’s also an important demographic change underway that will have not only strong residential construction implications but will also have spreading impacts for nonresidential building and engineering construction as well. America’s population growth is coming to a stall. The resident count climb of only +0.5% in 2019 was thanks to immigration. The number of immigrant arrivals presently, and for the foreseeable future, is going to be next to zero.

Nonresidential Building ‒ It can safely be said there isn’t going to be a great deal of new hotel and motel construction over the next while. Travel between countries has nearly dried up. At the least, it requires being prepared to spend two weeks in quarantine upon arrival. Estimates have placed the unoccupied-hotel-room rate above 75%.

Restaurant and conference hall closures are widespread. They’ve fallen victim to government bans on gatherings of five or more individuals. Some eating establishments (especially fast food places) are trying to survive through take-out, curbside, and delivery orders. Grocery store business, though, may be continuing at a pace better than expected. Such operations have been judged ‘essential’ and early-hour openings for seniors add an interesting new retail wrinkle.

Nevertheless, restrictions on the number of people allowed into grocery stores at any one time are a drawback. As with many things shopping-related, purchases have moved to the Internet.

‘Bricks and mortar’ retail construction has been bleak for years, and the deceleration is being made worse by the COVID-19 crisis. On the other hand, the need for distribution center construction to satisfy the explosion in order-placing digitally seems set to keep mushrooming.

Construction on a couple of new NFL stadiums is underway, in Los Angeles and Las Vegas, and the expectation is that work will be allowed to continue. As for the future of sporting events, attracting the crowds of old will necessitate assurance that the coronavirus is in check, either through a vaccine or medicines that obviate the prospect of intubation. As for many other forms of entertainment, they’ve moved into people’s homes through downloading and data streaming.

The future of office building construction appears to be in jeopardy. Much of the new square footage that has been taken up in office towers over the last several years has been to house high-tech workers. Now that those workers have been dislodged, as part of ‘social distancing,’ and they are managing to function okay at home, there’s an awkward question for developers hanging in the air. Tenants will be wondering why they are bothering to lease space and pay rent.

Manufacturing construction, which has been in the doldrums for more than a decade, due to offshoring of work, may be about to experience a revival. The international supply chain interruptions ‒ for example, due to factory closures in China, when the coronavirus contagion was at its most virulent ‒ that have inconvenienced many major firms, will likely lead to some degree of deglobalization and more production of components at home.

One segment of the manufacturing sector that was ‘hot’ last year, mega projects in the energy sphere, (e.g., refineries and LNG facilities), is not likely to ignite any sparks this year. Capital spending can’t be warranted when the global price of oil has dropped near $20 USD per barrel.

The ‘public’ portion of spending on educational facilities helps to establish a floor level, and renovation work tied to ensuring the safety of children will continue to proceed. But there are two negative factors to consider. First, institutions of higher learning were previously able to tap their escalating endowment funds for expansion money. Stock market collapses, of late, have sidelined that option. Second, the previously mentioned slowing in population growth, as well as the drop-off in foreign student enrollments, will both weigh on future school construction.

Medical facility construction is receiving a boost from the building of ‘surge’ hospitals to handle overflows of patients that have contracted the coronavirus. One lesson to be learned from this pandemic is the need for capacity increases to handle out-of-the-ordinary and out-of-left-field illness events. At the same time, though, a big advance in offerings of ‘telemedicine’ is somewhat mitigating new square footage demand for patient care.

There’s also much to be done on the health care design side, especially with respect to separating contaminated patients from the general population. Rethinking the patterning of interior layouts has become imperative for passenger and navy ships, prisons, hospitals, and, perhaps most critically of all, seniors’ homes.

Engineering/Civil ‒ Much of engineering construction depends on the ‘public’ purse. Since the financing is established in advance through government budgets, it tends to be more stable than privately-funded endeavors. Infrastructure works in transportation and telecommunications have long been deemed essential to maintain America’s competitive edge.

Again, though, there are some quickly developing broader issues that are stirring up headwinds for engineering/civil construction. These are not normal times for government spending initiatives. Spending of $2 trillion (relative to an annual $22 trillion economy) is being earmarked for stimulus spending, but it will go mainly towards unemployment insurance and keeping small business firms afloat, as well providing support for hardest-pressed sectors (e.g., the airlines).

Every major airport in the country has billion-dollar expansion plans on the drawing boards. It would hardly be surprising if a high proportion of those dreams were to dissipate under today’s harsh light.

Street and road and sewer and waterworks projects are often tied to residential construction, which will be hitting pause until much later this year, at the earliest.

As for potential mega project work (i.e., projects of a billion dollars or more each), there’s talk of TC Energy beginning construction on the Keystone XL oil pipeline expansion, from Hardisty Alberta to Steele City, Nebraska. If this truly does occur, and false initiation signals have previously been run up the flagpole, the timing will be interesting. Potential protesters are in not-judicial, but rather health-related, lockdown.

Finally, if there’s one corner of engineering construction that has proven its worth above all others in this pandemic, it’s telecommunications availability and reliability. To the extent the economy is functioning at all, it’s thanks to the gazillions of messages that are zig-zagging back and forth in cyberspace.

Tables B-3 and B-8 of the monthly Employment Situation report record average hourly and average weekly wages for industry sectors. B-3 is for all employees (i.e., including bosses) on nonfarm payrolls. B-8 is for ‘production and nonsupervisory personnel’ only (i.e., it excludes bosses). For ‘all jobs’ and construction, there are eight relevant percentage changes to consider.

From March’s BLS Table B-3 (including supervisory personnel), the ‘all-jobs’ y/y earnings increases were +3.1% hourly and +2.2% weekly. The construction-worker subset, at +2.7% hourly and +1.9% weekly, didn’t do quite as well. A similar pattern prevailed in Table B-8 (i.e., the one which leaves out bosses). From the second table, economy-wide workers realized pay gains of +3.4% hourly and +2.5% weekly, while construction workers received lesser compensation climbs of +2.6% hourly and +2.1% weekly.

Table 1 conforms to the type-of-structure ordering adopted by many firms and organizations in the industry. Specifically, it breaks nonresidential building into ICI work (i.e., industrial, commercial, and institutional), since each has its own set of economic and demographic drivers. Table 2 presents an alternative, perhaps more user-friendly and intuitive type-of-structure ordering that matches how the data appears in ConstructConnect Insight.