Texas, at Half Speed, Still Leads All States in Total Nonresidential Construction Starts

Texas the Leader, but Accolades for Missouri and Indiana

According to ConstructConnect, U.S. nonresidential (NR) construction starts year to date in 2020 have been -26.9% compared with January-August of last year. Table 1 ranks the Top 20 states by their NR construction dollar volumes. 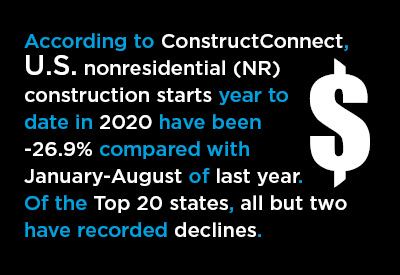 One feature that pops out is how dominant Texas is in the NR starts arena. The state’s dollar volume of starts has been cut in half (-51.1%) so far this year, but it still ranks number one overall. (Texas in full year 2019 was home to eight ‘mega’ projects starts with a combined value of $29 billion; 2020 has seen only project valued at more than $1 billion in the state.)

The dominance of Texas isn’t just because two of the other three large population states also recorded big NR starts declines. Florida was -38.3% and New York, -24.1%. Even if those two states had stayed flat, Texas would still be beating them.

California, though, the other member of the Big 4 population states, and currently facing an onslaught of forest fires, has hardly faced any reckoning on the nonresidential construction front to date, -1.4%.

Of the Top 20 states, all but two have recorded declines, with 13 suffering double-digit percentage drops. Other than California, the smallest percentage pullbacks have been recorded by Ohio (-2.4%), Tennessee (-3.3%), and Arizona (-6.6%).

But how about some accolades for Missouri and Indiana. They’re the only states that have managed nonresidential construction ‘starts’ advances, +24.5% and +2.2% respectively.

Tables 2 and 3 rank states according to the two major breakdowns of total nonresidential construction starts, i.e., by nonresidential buildings and by heavy engineering/civil work.

From Table 2, the order of states by nonresidential building starts is the same as for ‘total’ ‒ i.e., Texas, followed by California, Florida, and New York. On a year-over-year basis, all four states of those states have suffered substantial nonresidential building starts declines: Texas, -59.6%; California, -22.7%; Florida, -26.4%; and New York, -26.8%. Texas, though, has had double the setback of the other three.

Ohio (-0.2%), in fifth place, and Illinois (+0.7%) in seventh, have managed to stay even with January-August of last year, while Missouri (+36.1%) in sixth position, has pulled off an impressive gain.

The ordering of states according to engineering starts (Table 3) shows more variety. California takes over from Texas as number one, as the former makes a sizable upwards leap, +36.4%, while the latter steps into a pothole, -22.9%.

Nationwide, nonresidential building construction starts through August have been -34.4% (vs Jan-Aug 2019) and heavy engineering/civil starts, -12.9%.