A Dearth of Mega Projects in September Versus August

ConstructConnect announced today that the latest month’s volume of construction starts, excluding residential work, was $34.7 billion (green shaded box, Table 3 below),-32.9% compared with August’s figure of $51.6 billion (originally reported as $50.2 billion). The decline of nearly one-third (or -$16.9 billion) was due to a disparity in ‘mega project’ start-ups. Whereas August featured 5 projects of a billion dollars or more each, totaling $18.7 billion, September had only two such undertakings, combining for $2.3 billion (yielding a gap of -$16.4 billion). 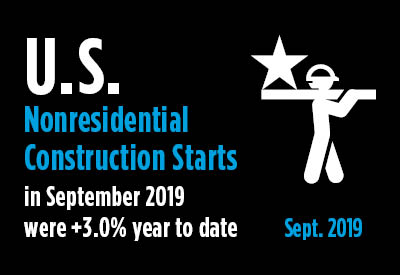 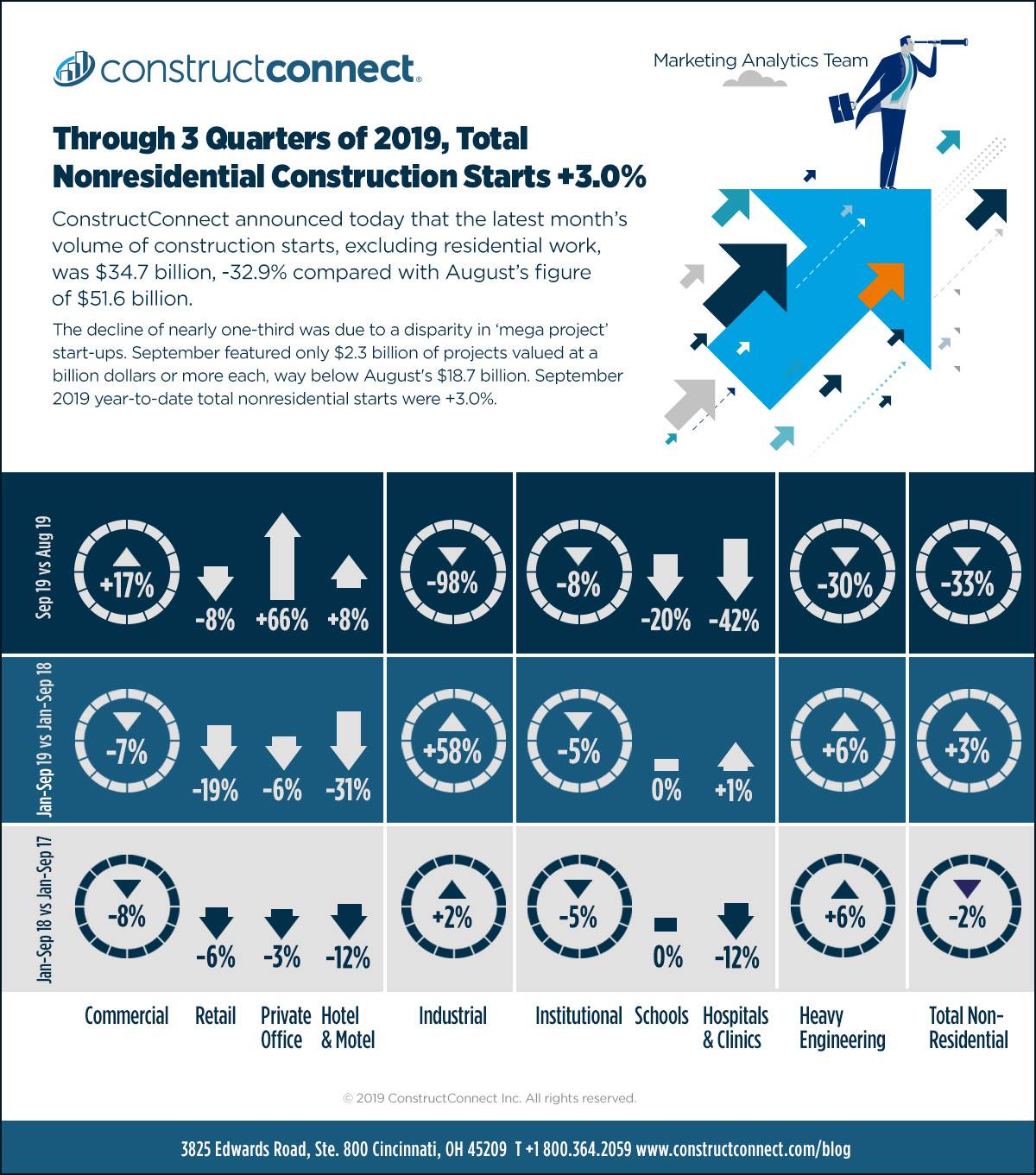 The ‘smoothed’ grand total of starts, which includes residential, was -1.3% in September. Residential activity has been -9.5% on a 12-month moving average basis, with multi-family starts sliding backwards (-15.1%) more precipitously than the single-family market (-6.8%).

‘Nonresidential building’ plus ‘engineering/civil’ work accounts for a larger share of total construction than residential activity. The former’s combined proportion of total put-in-place construction in the Census Bureau’s latest report, for August, was 60%; the latter’s was 40%.

Total employment in the U.S. construction sector rose by only +7,000 jobs in September, lowering the year-to-date monthly average for 2019 to +12,000, well under last year’s comparable figure of +26,000. The latest year-over-year increase in ‘hard hat’ jobs was +2.1%, the slowest rate of advance since January 2013 (also +2.1%). The most recent peak annual employment gain occurred in December 2014, at +6.1%. Construction’s NSA unemployment rate in September, however, was extremely tight at 3.2%. A level of 3.2%, which also occurred in May of this year, is the lowest figure for construction’s unemployment rate this century.

Returning to year-over-year jobs growth, the increase economywide in September was +1.4% with health care, at +2.6%, taking over as the sector with the speediest increase.

The -32.9% drop in total nonresidential starts month-over-month (m/m) in September originated mainly in the industrial (-97.5%) and engineering (-29.6%) categories, with a decline in institutional (-8.2%) occurring as well. Commercial, however, registered a good gain (+17.2%). Commercial had help from two stadium projects (see Top 10 Project Starts in the U.S. - September 2019), but they were no match for August’s scroll of ethane cracker, railroad, rapid transit, power, and auto plant work.

Within institutional, the ‘school/college’ component (a 61% slice) to date in 2019 has fallen at little short of its usual two-thirds share. Educational facility starts through September were: -20.4% m/m; -11.4% y/y; and -0.1% ytd. While groundbreakings on kindergarten through grade 12 structures have been positive at +3.9% ytd, they’ve been negative for universities and colleges, -11.8%. Next most important for institutional have been health care facility starts (with a 25.9%, or about one-quarter, share). ‘Hospital/clinic,’ plus ‘nursing/assisted living,’ plus ‘miscellaneous medical’ starts in September were: -24.6% m/m; -28.2% y/y; and -15.1% ytd.

Moderation in JOLTS & Engineering the Star in Trend Graphs

From Graph 1, construction sector job openings, whether measured as a three-month-moving-average ‘level’ or ‘rate,’ continue to be elevated to an extreme degree, although they have taken a minor step back from their May peaks. The job hires picture in construction from Graph 2 is less bullish. The ‘level’ is staying on a gradually upwards climbing path that began in early 2014, but the ‘rate’ remains locked in the same range of 5.0% to 5.5% that has prevailed for six years.

Among the 12-month-moving-average trend lines (Nonresidential Construction Starts Trend Graphs - September 2019), most of the excitement ties to Graph 6. The ‘miscellaneous civil’ curve, after a sharp drop early this year, has skyrocketed again due to a recent spate of railroad, rapid transit and power project go-aheads. The ‘bridges’ slope also continues to display commendable uplift. ‘Retail’ in Graph 3 is the one type-of-structure most clearly moving in a downwards direction of no benefit to contractors looking for new work. The slopes of most of the other categories have been leveling off lately.

*Rate is number of hires during month as % of construction employment.
Job Openings and Labor Turnover Survey. Latest seasonally adjusted (SA) data points are for August, 2019.

From September’s BLS Table B-3 (including supervisory personnel), the ‘all-jobs’ earnings increases were +2.9% hourly and +2.6% weekly. Construction workers as a subset of ‘all-jobs’ fared poorly hourly, +2.2%, but took center stage weekly, +4.0%. From the latest Table B-8 (excluding bosses), the all-jobs compensation jumps were +3.5% hourly and +3.1% weekly. Again, construction was shaded hourly, +2.3%, but grabbed the spotlight weekly, +3.8%.