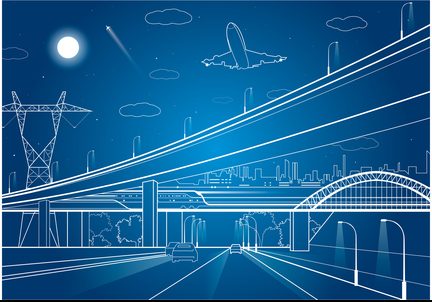 U.S. Infrastructure Earns a D+ From the ASCE

America just got its infrastructure report card from the American Society of Civil Engineers (ASCE) and only managed to score a cumulative GPA of a D+. This is the same grade the ASCE gave infrastructure back in 2013.

A grade of B is considered adequate and in order to improve the nation’s infrastructure that much would require an investment of $4.59 trillion by 2025, a shortfall of $2 trillion from current spending levels.

Grades are given to 16 categories of infrastructure. It’s not all doom and gloom. Half of the categories improved their grades from the 2013 report card. Four categories remained the same and only two had lower scores since the last report card.

“While our nation’s infrastructure problems are significant, they are solvable,” said Norma Jean Mattei, ASCE President. A majority of the categories were in the D range, meaning the infrastructure is in poor condition with areas of significant deficiencies and have a strong risk of failure.

Grades for each category are given using the following criteria: Capacity, Condition, Funding, Future Need, Operation and Maintenance, Public Safety, Resilience and Innovation.

Here’s a breakdown of which categories saw improvement, which remained the same and the ones that saw their grades drop since 2013:

Hazardous Waste: Hazardous waste improved from a D to a D+. According to the report card, total needs hazardous and solid waste is $7 billion through 2025. Current funding is at $4 billion, leaving a $3 billion gap.

Levees: Levees improved from a D- to a D. Only $10 billion is expected to be funded of the estimated $80 billion needed to get the nation’s levees up to an adequate grade.

Rail: The rail network bumped its grade up from a C+ to a B. This was the highest grade achieved in all the categories and the only one to score an adequate grade. There’s a funding gap of $29.4 billion of the $154.1 billion needed.

Schools: Our nation’s schools went up from a D to a D+. Schools are facing a $380 billion funding gap. It’s estimated that $840 billion needs to be spent on schools to raise their grade to a B.

Wastewater: Wastewater improved from a D to a D+. Water and wastewater infrastructure are facing a spending gap of $105 billion. Total needs through 2025 are $150 billion with only $45 billion estimated to be funded between now and then.

Aviation: The score for aviation was a D. Our nation’s airports are facing a $42 billion gap in spending levels to 2025. Only $115 billion of the $157 needed is expected to be met.

Bridges: Bridges scored a C+. The American Road & Transportation Builders Association (ARTBA) recently released their 2017 Bridge Report showing that nearly 56,000 of the bridges in the U.S. are structurally deficient. That’s 9.1% of all bridges nationwide.

Energy: Energy was awarded a D+ for 2017. Total needs for electricity is $934 billion, reflecting a funding gap of $177 billion.

Roads: Our roads and highways managed only a D in 2017. According to the report card, surface transportation projects (roads, bridges and transit) are facing the largest funding shortfall by 2025 at $1,101 billion. One suggestion to bridge that gap is to raise the federal gas tax from 18.4 cents per gallon to 25 cents per gallon.

Solid Waste: Solid waste fell from a B- to a C+.

Transit: Transit had the lowest score of all categories, dropping from a D to D-.

These grades shouldn’t come as a surprise. Failing infrastructure systems like the Flint water crises in Michigan or the spillway failure at the Oroville Dam in California are frequently making national headlines.

The ASCE is hopeful that President Trump will be able to fulfill his promise of providing $1 trillion to infrastructure spending, which would cut the spending gap they estimate in half. That seems like a long shot given the fact that Congress hasn’t raised the federal gas tax since 1993 and their recent track record with committing to sufficiently funding infrastructure spending.

The report also mentions that greater investment from the private sector needs to happen as well as the importance that public-private partnerships will have on repairing and replacing our nation’s failing infrastructure.

You can find the full report card here.