‘Run of the Mill’ Trade Deficits in March

The following seven graphs (and one table) show how the U.S. and Canada performed in foreign trade through the first quarter of this year. Of course, Q1 won’t be setting the pattern for the remainder of the year. The COVID-crisis landed hard on both economies in mid-March, throwing all expectations based on historical precedent out the window. 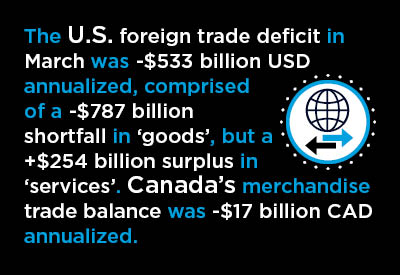 Nevertheless, it’s worthwhile to know from whence we started, as new less certain paths are taken.

Canada’s merchandise trade balance also came up wanting in the latest month, at -$17 billion CAD annualized, but not alarmingly so.

The last data point is for March 2020.
Based on seasonally adjusted monthly figures, projected at an annual rate.

The last data point is for March 2020.
Based on seasonally adjusted monthly figures, projected at an annual rate.

The most striking feature of the U.S. trade deficit in March was the shift in its trading partner origins. China ceased being the major contributor. China’s share of the deficit fell to only 20%, from a previous level that usually ranged from 40% to 50%. Factory shutdowns on the other side of the Pacific inhibited supply chain flows.

Now that China’s economy is up and running again, March’s setback may prove to be temporary. But the full scale of the shocks to America’s consumer buying patterns and industrial production, due to the pandemic, remain unknown.

The Euro area in March accounted for the largest chunk of the U.S. trade deficit, at one-quarter. Furthermore, almost all of that 25% slice originated with only two countries, Germany (10.0%) and Ireland (9.9%). The excess of imports over exports with Germany results from motor vehicles and precision equipment. In trade with Ireland, it’s pharmaceuticals and blood plasma products that arrive in abundance.

Oil imports used to be a major source of the U.S. trade deficit. That’s no longer the case. U.S. oil imports, measured in number of barrels, have been declining since 2004-2006 (see Graph 5).

By the way, the share of total U.S. crude imports coming from Russia is still minimal, at only 2%, but that nation has risen from nowhere to become the seventh ranked foreign supplier—ahead of Brazil, Nigeria and the U.K.

Nigeria really needs a helping hand. Its economy is highly dependent on oil revenues, which have been under severe strain. At the same time, the coronavirus has been ravaging the nation’s large and densely packed population of 200 million people.

Saudi Arabia is in third spot with a 6.9% share. The proportion taken by all OPEC nations is 16.7%.

On April 20th, the price of West Texas Intermediate oil (WTI) dropped below zero, and who managed to grab what share of U.S. total oil imports seemed irrelevant.

The price has since firmed up, however, to around $30 USD per barrel, thanks to OPEC and several other key supplier nations (e.g., Russia and Mexico) agreeing to production cutbacks, plus an anticipation of greater demand as the world economy struggles back to its feet.

Among Canada’s provinces, Alberta currently has one of the worst-hit economies. Its unemployment rate, at 13.4%, is second worst, beating only Quebec, 17.0%.

Furthermore, the price of Western Canadian Select (WCS) oil from Alberta carries a discount of $10 USD per barrel relative to WTI.

Nevertheless, the dollar volume of Alberta’s energy product exports in Q1 was +11.8% compared with Q1 2019. Among the 19 provincial export categories spelled out along the right-hand vertical axis of Graph 7, ‘Alberta energy products’ is the biggest by dollar volume.

Second-biggest are ‘Ontario motor vehicle and parts’ exports. They were a disappointment in 2020’s first quarter, at -11.1% y/y.

From Graph 7, it appears Quebec had a decent enough export quarter, with aerospace products in the lead (+11.6%). Don’t look for that uplift to continue, though. Air traffic and planes production are both now in tailspins.

British Columbia, on the other hand, had nothing to cheer about with respect to its exports in Q1. It bears noting that B.C. energy exports (-28.5% y/y) are of natural gas rather than oil.