U.S. Economy Claws Back 29% of Earlier Big Drop in Jobs

With today’s June Employment Situation report from the Bureau of Labor Statistics (BLS), the U.S. economy has now clawed back 29% of the total number of jobs lost in March and April, when shelter-at-home directives were first enacted to deal with the coronavirus outbreak. 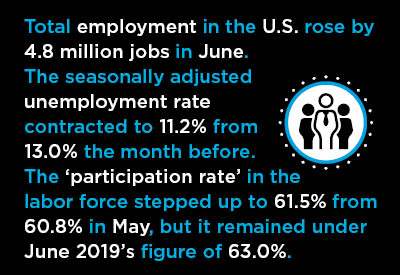 February was the last month when the total employment picture in America was ‘normal.’ Two months later, with April’s labor market statistics, the total number of jobs in the country was down by 20.5 million.

The percentage change in total employment from February to April was -13.5%.

While far from being rosy, the jobs numbers are perking up a bit. Staged reopenings in states are the reason.

The numbers for ‘total’ and industrial subsectors are set out in Table 1.

The four industrial subsectors that have reclaimed the largest shares of their February-to-April job losses have been construction, 51.6%; manufacturing, 43.1%; retail, 39.6%; and leisure and hospitality, 36.9%.

Two sectors, information services and government, are presently seeing even worse employment levels than in April.

The level of total employment in the country rose by 4.8 million jobs in June. The seasonally adjusted unemployment rate contracted to 11.2% from 13.0% the month before. The ‘participation rate’ in the labor force stepped up to 61.5% from 60.8% in May, but it remained under June 2019’s figure of 63.0%.

Among industrial subsectors, the largest nominal jobs increase month to month in June occurred in ‘leisure and hospitality’, +2.088 million. Second place went to retail trade, +740,000, with third spot claimed by ‘education and health,’ +568,000.

‘Leisure and hospitality’ also had the largest month-to-month percentage increase in employment in June, at +21.0%. The runner-up sector, retail trade, was far back, with a gain of +5.4%.

The most notable change in an unemployment rate among industrial subsectors in the latest month was registered by ‘mining, quarrying, and oil and gas extraction,’ i.e., a deteriorated to 17.8% from 8.4% in May and only 3.2% in June 2019.

The initial jobless claims number in the last five weeks has dipped below 2.0 million, but it has stayed above 1.4 million. Prior to March 21 of this year, it was consistently below 300,000.

The cumulative total of initial jobless claims over the past 15 weeks has been 48.7 million.

The number of individuals claiming unemployment insurance on an ongoing (as opposed to temporary or short-term) basis is 19.2 million. Less than two million was the usual level before the pandemic came to town and turned everything upside down.