U.S. October Jobs Growth Not as Underwhelming as First Appears

The headline figure on U.S. net jobs creation in October, as recorded in the latest Bureau of Labor Statistics (BLS)’s Employment Situation report, was a rather tepid +128,000. But as has occurred on several other recent occasions, there were significant revisions to past data that brighten the picture considerably. 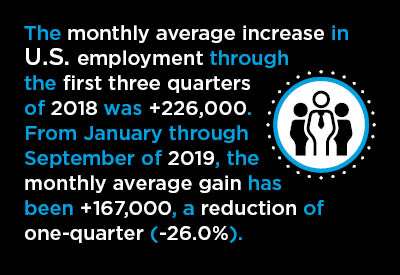 Nevertheless, there has been a deceleration in U.S. jobs growth this year. The monthly average increase in employment through the first three quarters of 2018 was +226,000. From January through September of 2019, the monthly average gain has been +167,000, a reduction of one-quarter (-26.0%).

The only way to secure further large increases in employment would be for the ‘participation rate’ (working-age adults actively wanting positions) to climb dramatically. In October, the participation rate did rise, but only marginally, from 63.2% to 63.3%.

By the way, the +95,000 revision to September’s jobs count originated in ‘retail’ work (+23,000) ‒ a surprise, given all the closures of ‘bricks and mortar’ locations ‒ and even more impressively in ‘leisure and hospitality’ work (+63,000). The ‘leisure and hospitality’ jobs jump was almost all at ‘food services and drinking places’. Clearly, the population at large is still on board for expenditures on entertainment.

U.S. ‘real’ (i.e., after inflation) GDP growth has eased in the latest two quarters to +2.0% (Q2) and +1.9% (Q3). Whatever forward momentum is being maintained is being provided by consumer spending. Consumer spending, in turn, is helped along mightily by jobs growth, which will be hard pressed to stay as dominant a force as it has been.

Manufacturing’s record of no jobs creation so far in 2019 aligns with other indicators pointing to contraction in the sector. The Purchasing Managers Index (PMI) of the Institute for Supply Management (ISM) has dropped below 50% and the capacity utilization of production plants continues to languish below 80%.

In ‘financial services’ monthly average jobs growth this year (+10,000) has been similar to last year (+11,000), while for ‘retail’ and ‘information services’, there has been minimal change in staffing over the past two years.

The month-long General Motors strike, with ripple effects throughout the economy (i.e., through supply chains), played some role in keeping the net new jobs count muted in September.

The auto sector work stoppages, along with wildfires in California, also contributed to an elevation in the initial jobless claims number for the week of October 26th, lifting it to 228,000.

Teachers in Chicago have been on the picket lines for a week now. At least so far, however, feistier labor relations have not been leading to more rapid earnings increases. In the latest month, pay hikes for all workers in the U.S. were +3.0% y/y hourly and +2.7% weekly, not much different from where they’ve been for an extended period of time.

Construction workers, as a subset of ‘all jobs’, had compensation gains that were less hourly but more weekly, +2.4% and +3.7% respectively.

The Federal Reserve and Interest Rates

The Federal Reserve, for the third time this year, just lowered its trend-setting interest rate. The level of the federal funds rate is now in a range between 1.50% and 1.75%.

There are only two official reasons for the Fed to alter its interest rate policy: (1) to deal with inflation (not an issue at this time); and (2) to help with jobs creation (not much more can be done).

But there are also a couple of other ‘unofficial’ reasons: (3) to change the value of the U.S. dollar (manufacturers would welcome a decline as an aid to export sales); and (4) to avoid the wrath of President Trump (who will always seek stimulus and who is also looking for a ‘break’ on government debt carrying costs).

As for (3), the U.S. economy is still performing best among all global economies and the greenback is the ‘safe-haven’ currency of choice for international investors. No marked decline in its value seems likely.