The Foreign Trade and Construction Connection, U.S. and Canada

The foreign trade picture in the United States has worsened considerably. The goods trade balance has deteriorated to -$1.5 trillion USD. That’s an all-time deepest level.

Part of the reason lies with American consumers. When jobs are plentiful and incomes are rising, consumer purchases soar and that pulls in a lot of foreign-made items. Historically, half the U.S. trade deficit is in consumer goods.

But another big reason for the outsized jump in the U.S. goods trade shortfall has been the dramatic rise in the international price of oil. Both West Texas Intermediate (WTI) and Brent crude are back above $100 USD per barrel, after years of languishing in the lower reaches.

Canada continues to be the main supplier of America’s oil imports. Canada currently holds a 63.1% (or nearly two-thirds) share of the total U.S. volume (measured in barrels) drawn externally.

Also, the number of barrels of crude received from Canada is up year to date, +4.8%, but not by as much as total imports, +10.8%. For Canada to significantly increase its oil shipments to the United States would require further expansions of the pipeline system, a notion which has had difficulty finding traction with much of the environmentally sensitive American public and with the current administration in Washington. In the short-term, upping shipments by rail is the only realistic response.

Particularly notable, though, has been the climb in oil imports from Saudi Arabia, +93.9% YTD. Extracting oil from the ground in Saudi Arabia is a relatively easy process and production could be ramped up to lower the world price, but MBS—Mohammed Bin Salman, the de facto ruler of the nation—has declined to take that step.

Separate from oil is the increasingly frenetic natural gas market. The price of natural gas at the Henry Hub terminal has increased into the mid-$8.00 USD range per thousand cubic feet (from around $3.00).

But here’s where matters turn especially interesting. The price of natural gas in Europe is above $30.00 USD per MCF. Since February 24, marking the invasion of Ukraine, Russia has become an outcast and the supplies of its gas to western markets have either been deliberately cut off by Moscow or have become, on ethical grounds, unwanted.

Germany, Italy, France, and other nations are seeking alternative sources of supply. U.S. energy firms are recognizing there’s a tremendous opportunity, based on both heightened foreign demand and the feedstock cost differential, to expand liquefied natural gas manufacturing capacity, with an almost assured customer base across the Atlantic.

The LNG exporting facility story, with accompanying on-site building activity, is only likely to capture more of construction’s ‘prime time’ news in the several years ahead.

A Hearty Boost to Construction from Canadian Foreign Trade

Contrary to the United States, the foreign trade picture in Canada has improved considerably. After a string of monthly merchandise trade (i.e., goods) balances that were almost always negative, lasting from mid-2008 to Spring-2021, there have been surpluses in nine of the last ten months.

Canada, a huge storehouse of resource sector wealth, has benefitted from a general revival in commodity prices internationally. The degree to which Canadian export sales have been vastly exceeding import purchases has been particularly striking in oil, coal, iron ore, copper, potash, aluminum, and forestry products. Even quick glances at Graphs 7 through 13 below can’t help but bring this message home.

There have been periods in Canada’s history when the construction tale was mainly driven by mega resource projects. That was certainly the case in the 00s when the Oil Sands projects in Alberta taxed the construction industry countrywide to the max. There were extraordinary demands for material inputs and skilled tradespeople.

The next round of raw-materials-centric construction activity is already underway. A massive LNG project, headed by Shell, is proceeding in NW British Columbia, with thought being given to an eventual doubling of capacity. Other LNG prospects are either in the works or being discussed for both coasts.

A giant potash mine (Jansen by BHP Billiton) has been authorized in Saskatchewan.

Work on a new gold mine (Greenstone by Equinox) is underway in Ontario.

Three hydrogen extraction plants (separately by Suncor, ATCO, and Air Products & Chemicals Inc.) are planned in Alberta. They’ll draw hydrogen from natural gas. A hydrogen plant (a Quebec Hydro and Thyssenkrupp joint venture) proposed for Varennes on the outskirts of Montreal will separate hydrogen from water through electrolysis.

Plus, popping up once again, there are numerous major energy-related projects to be aware of (Dow petrochemical plant in Alberta; Baie du Nord offshore oil to the east of St. John’s, Newfoundland, and Labrador).

For Canada, success in raw materials net trade is the vitamin supplement that fuels extra excitement for all workers with construction in their DNA. 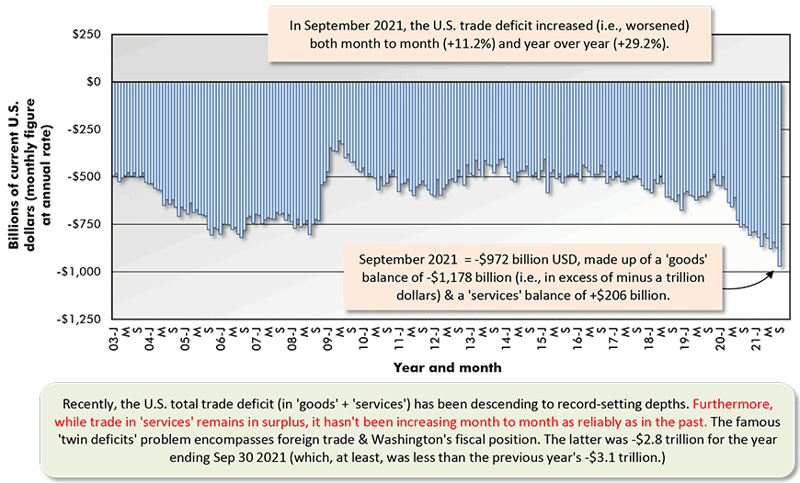 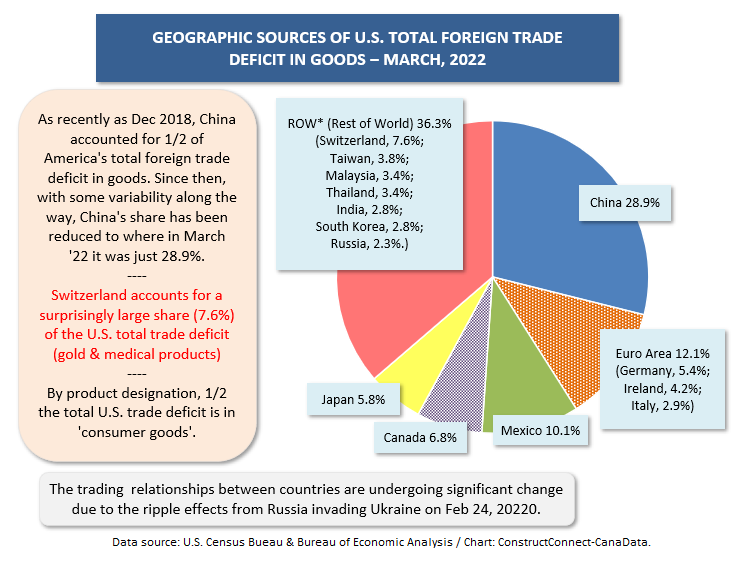 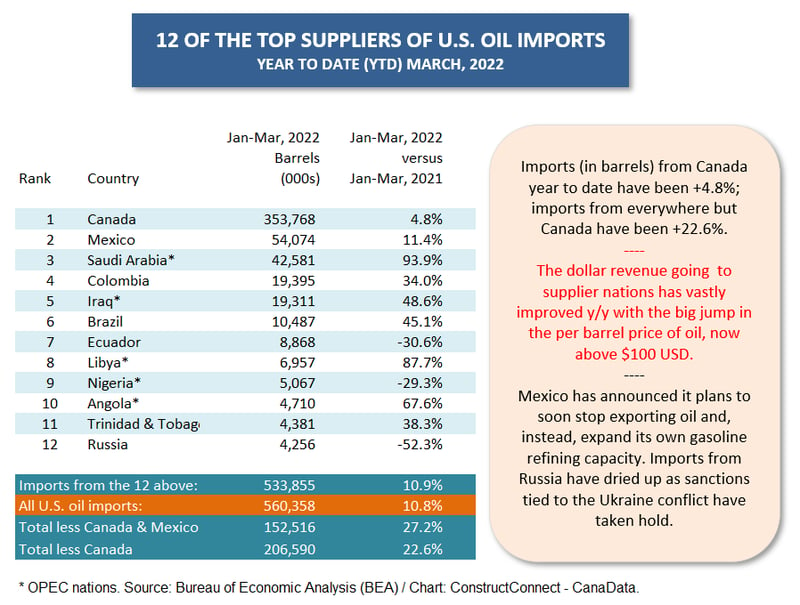 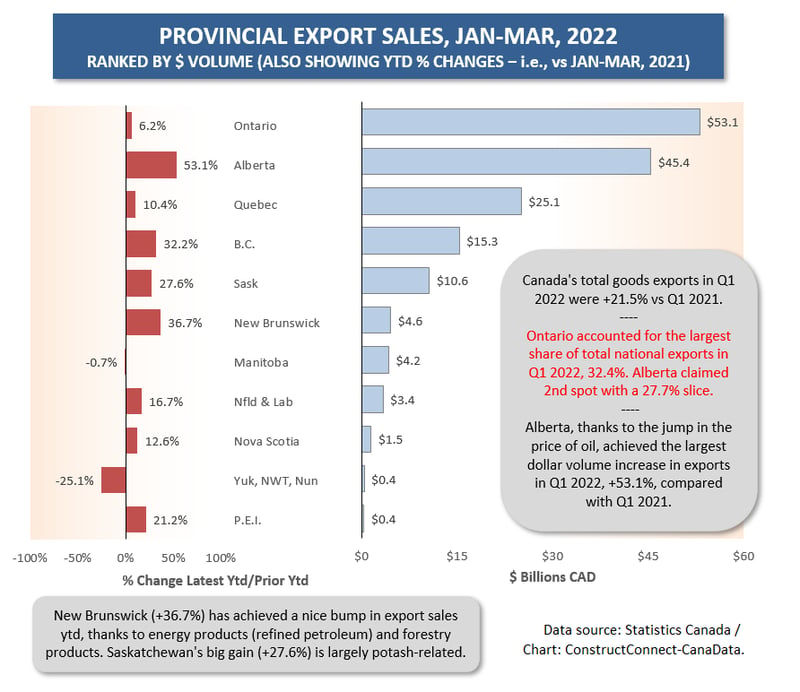 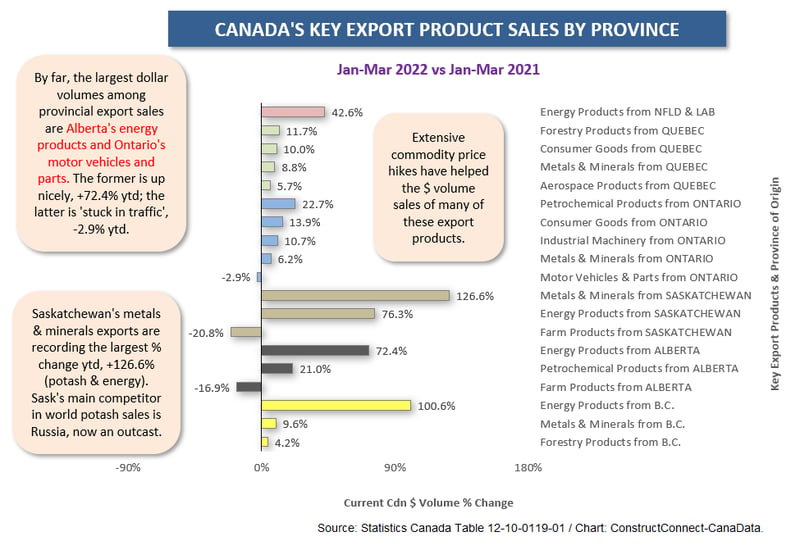 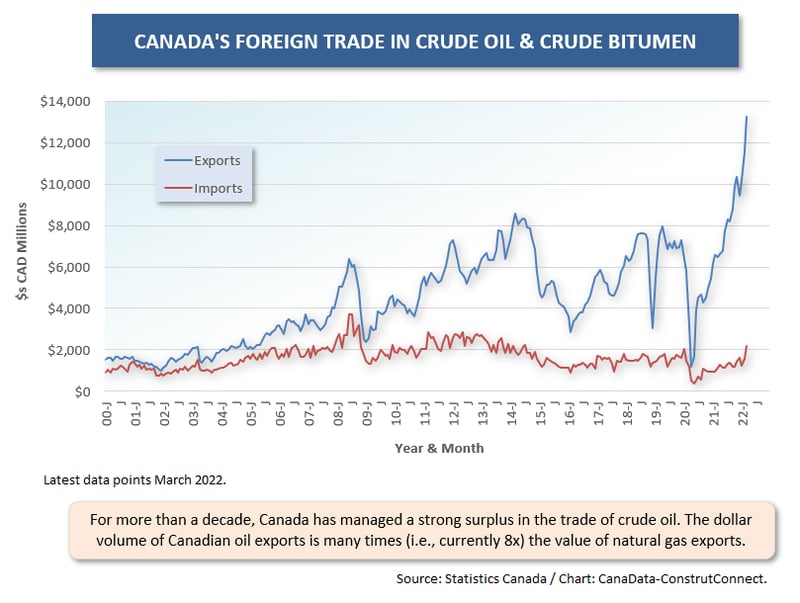 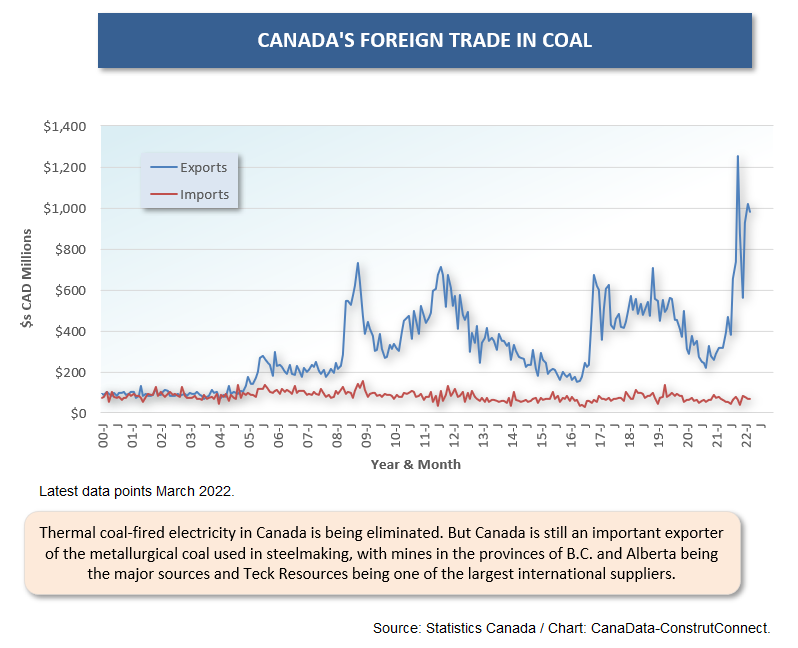 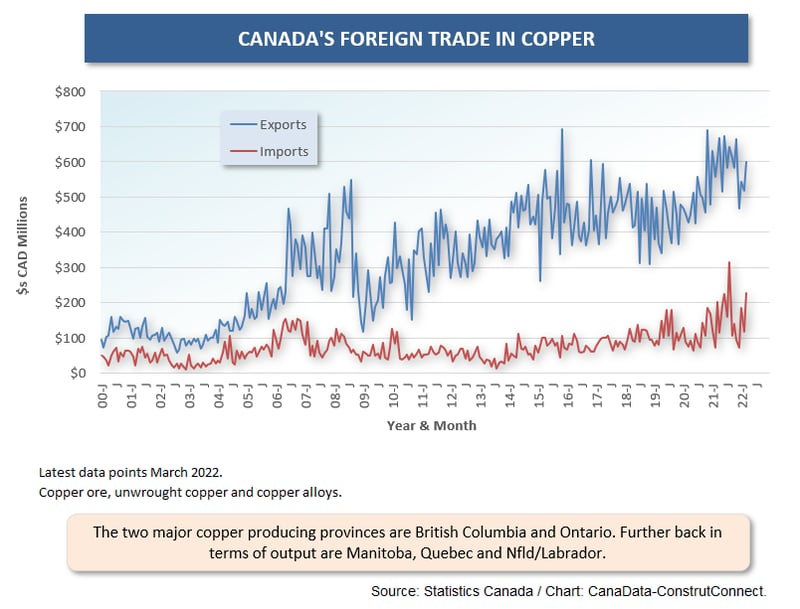 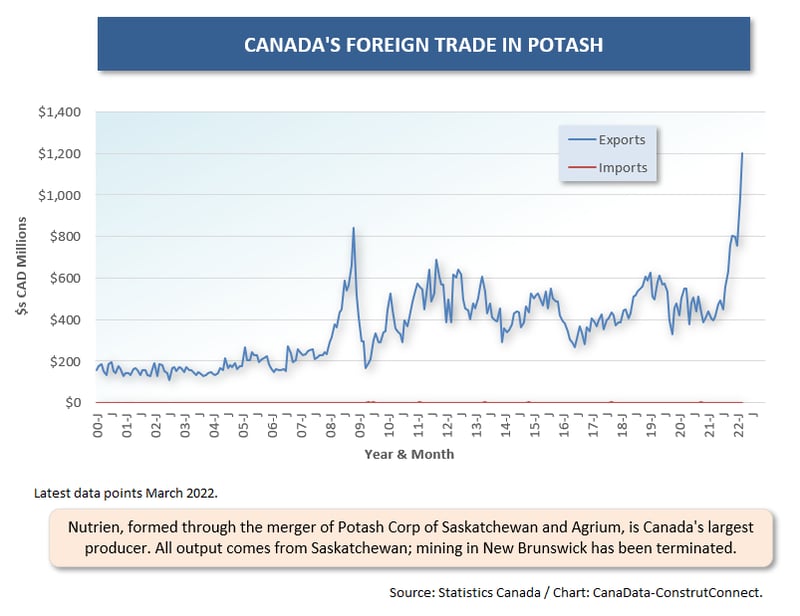 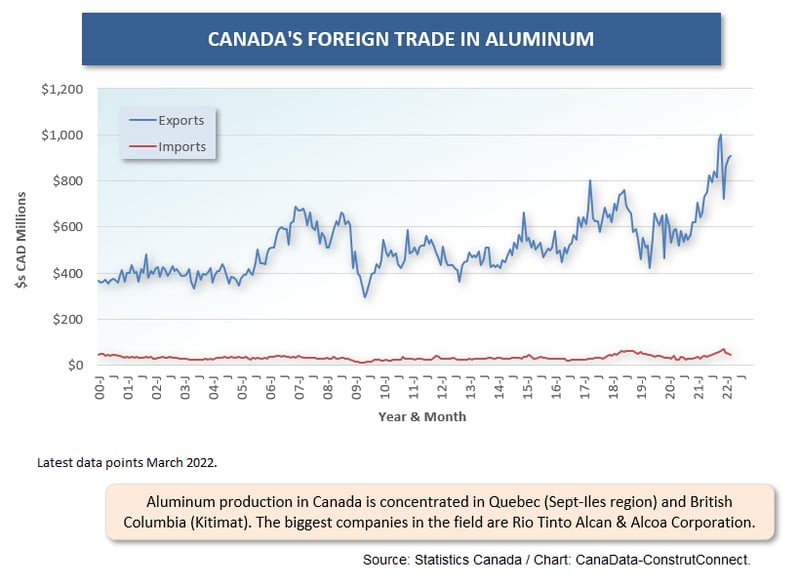 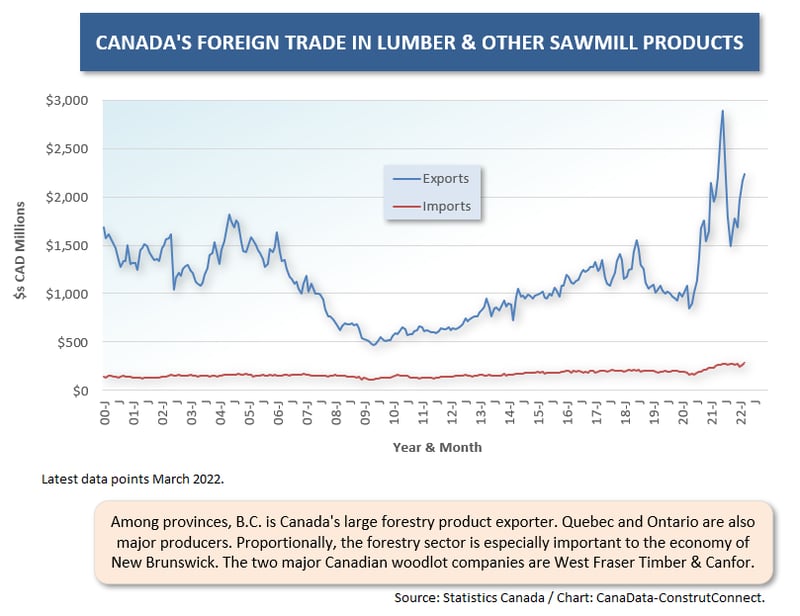