In July, No Slackening in U.S. or Canadian Jobs Recovery Pace

July was an excellent month for jobs creation in the United States. According to the Bureau of Labor Statistics, total employment in America last month rose by +943,000 positions. 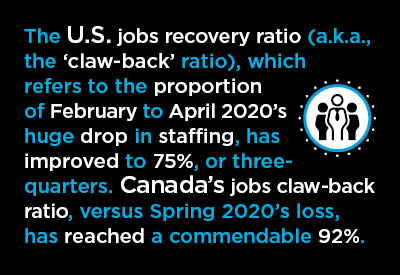 Furthermore, the prior month’s gain has been revised considerably higher. June’s increase was originally reported as +850,000 jobs. It is now appearing in the Employment Situation Report as +938,000. That’s a bonus of +83,000 jobs.

Therefore, net jobs in June and July were each just a little shy of +950,000. The jobs recovery ratio (a.k.a., the claw-back ratio), which refers to the proportion of February to April 2020’s huge drop in staffing (when the coronavirus flare-up first paralyzed economic activity), has improved to 75%, or three-quarters.

Something important to note, though, is that the jobs jump in July wasn’t particularly widespread. It came mainly in just two sectors, ‘leisure and hospitality’ and ‘government.' Net employment in the former rose by +380,000, and in the latter, by +240,000. Their combined increase of +620,000 was about two-thirds of the +943,000 climb in total employment.

In ‘leisure and hospitality,’ hotel and motel employers took on +74,000 new hires and bar and restaurant owners welcomed back +253,000 helpers.

The ‘government’ increase in employment was all at the local level and tied to recruitment in the educational field.

The construction sector participated sparingly in the latest month’s hiring spree. July’s number of onsite workers rose by only +11,000. Construction’s NSA unemployment rate is now 6.1% compared with 8.9% at the same time last year.

The manufacturing sector’s NSA unemployment rate has dropped to 4.2% versus 8.6% twelve months ago. Manufacturers added +27,000 workers to their payrolls in July. 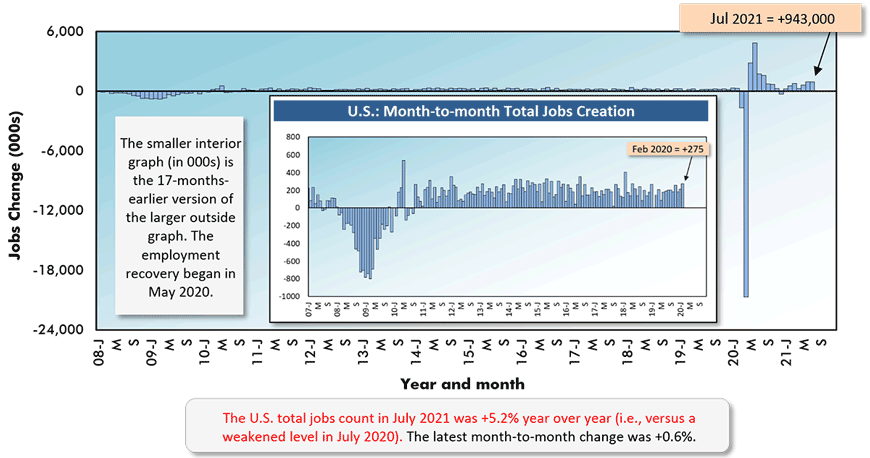 If you’re someone who’s keeping a wary eye on inflation, know that the latest year-over-year increases in compensation have been more spirited than was the case pre-pandemic. For all jobs, July’s increase was +4.0% hourly and +4.6% weekly. Construction workers as a subset of ‘all jobs’ received +3.7% both hourly and weekly.

For ‘all jobs’ but leaving out bosses and concentrating only on production workers, the y/y paycheck gains in July were +4.7% hourly and +5.3% weekly. Those are hefty hikes. For construction workers, omitting supervisors, the advances were +4.4% hourly and +4.7% weekly.

Canada’s total employment in July rose by +94,000 jobs and, in a radical departure from June’s pattern, almost all the increase (+83,000) was in full-time as opposed to part-time work.

Besides the ‘headline’ U rate, Statistics Canada publishes what it has labeled an R3 U rate. R3 is calculated using the same stricter methodology concerning who is really, truly looking for work as is adopted by the BLS. R3 NSA U in July was 6.2%, not much different from the 5.7% figure for the U.S.

Again, though, the construction sector was a bystander amidst the jobs creation fervor. In fact, the number of onsite jobs north of the border in the latest month contracted by -4,000.

Canadian manufacturing added +9,000 jobs in July, but it was ‘accommodation and food services’ with the biggest bulge, +35,000 jobs.

Provincially, Quebec, Manitoba, and British Columbia stand out for having low unemployment rates presently: 6.1%, 6.1%, and 6.6% respectively. 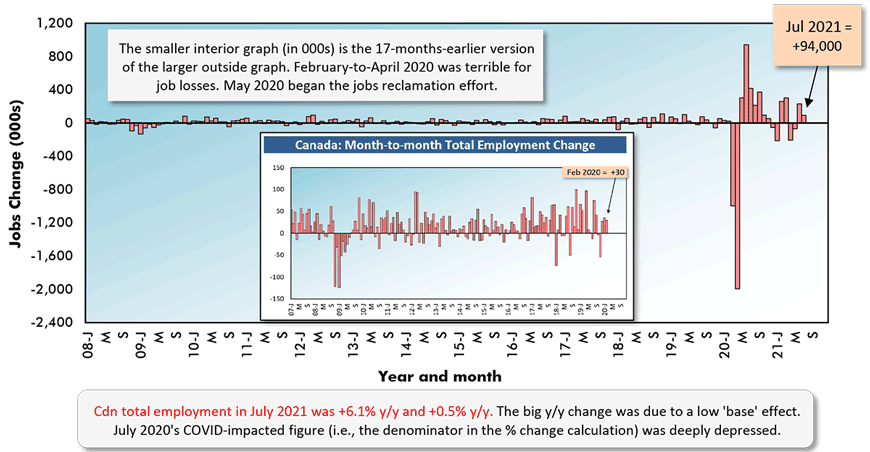 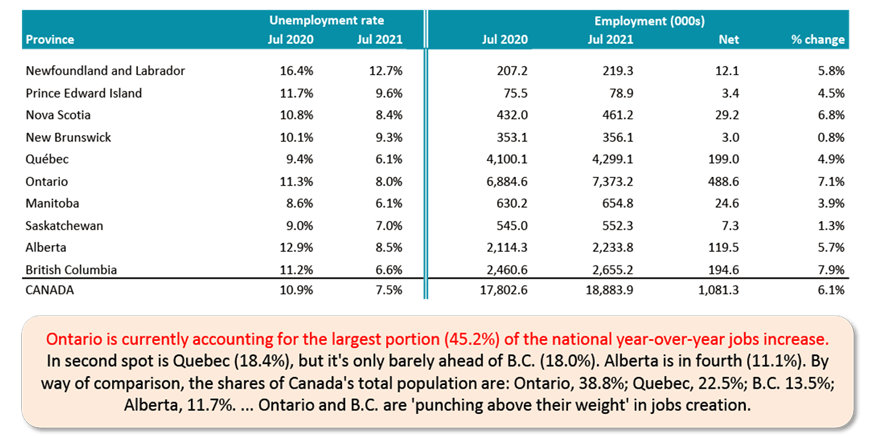 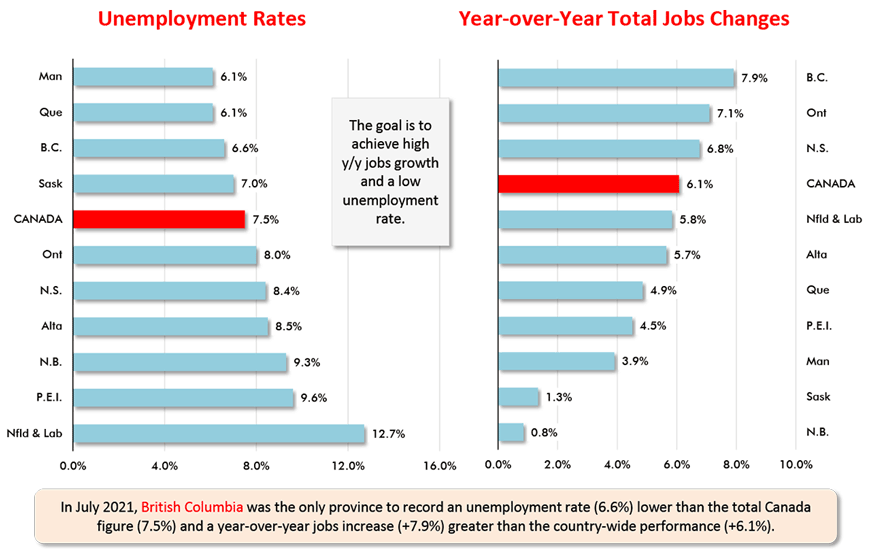 U.S. Half Million Jobs Increase in May Still Only Drop in Bucket Read this Blog Post