ConstructConnect announced today that January 2022's volume of construction starts, excluding residential work, was $29.2 billion. The latest month's nonresidential dollar volume was -4.5% versus the same month of the previous year, January 2021. On the positive side, though, January 2022 was +11.5% compared with its preceding month, December 2021. 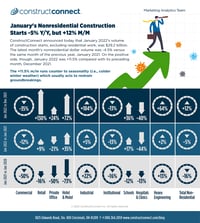 Interestingly, January of 2021 also included a mega-sized power project, but a transmission line in Maine for $1.0 billion. In the first month of last year, there was also a startup on another engineering project, Enbridge’s Line 3 pipeline work for $2.6 billion.

If those three notably impressive megaprojects are netted out of the January 2022 and January 2021 starts results, then the non-mega starts volumes become almost even ($27.2 billion this year vs $27.0 billion last year), rather than -4.5%.

Regular readers of this Industry Snapshot will know there’s usually commentary on year-to-date results. It may be stating the obvious, but it’s worth flagging nonetheless that January (i.e., the first month of the year) and year-to-date results are one and the same. Year to date only takes on meaning from February on.

On a month-to-month basis in January 2022, the engineering starts subcategory cast a bright light, +63.7%; residential flickered with little moderation, -0.6%; and the switch controlling nonresidential building was dimmed, -14.7%.

Grand Total TTM starts in January 2022 on a month-to-month basis were -0.2%, which was a mild deterioration from the no change (0.0%) performances that occurred in December 2021 and November 2021.

On a year-over-year basis in January 2022, GT TTM starts were +7.3%, an improvement over December 2021’s figure of +6.7%. In turn, the +6.7% was a step up from November 2021’s +4.8%. The progressive steady gains in y/y results from one month to the next suggest a contracting marketplace that is responding to a generally warmer economic climate, with a downscaling of the pandemic (keeping all fingers and toes crossed) more clearly on the horizon.

‘Starts’ compile the total estimated dollar value and square footage of all projects on which ground is broken in any given month. They lead, by nine months to as much as two years, put-in-place (PIP) statistics which are analogous to work-in-progress payments as the building of structures proceeds to completion.

PIP numbers cover the ‘universe’ of construction, new plus all manner of renovation activity, with residential traditionally making up two-fifths (about 40%) of the total and nonresidential, three-fifths (i.e., the bigger portion, at around 60%). Over the past year, though, the mix has undergone a profound shift. In 2021’s full-year PIP results, the residential to nonresidential relationship was approximately half and half, with the former being 49.3% of total and the latter, 50.7%. In December on its own, on a not seasonally adjusted (NSA) basis, it was residential 48.3% and nonresidential, 51.7%. (Nonresidential is nonresidential buildings plus engineering).

PIP numbers, being more spread out, have smaller peak-over-trough percent-change amplitudes than the ‘starts’ series. As an additional valuable service for clients and powered by its extensive ‘starts’ database, ConstructConnect, in partnership with Oxford Economics, a world-leader in econometric modeling, has developed put-in-place construction statistics by types of structure for U.S. states, cities, and counties, ‘actuals’ and forecasts. ConstructConnect’s PIP numbers are being released quarterly and are featured in a separate reporting system.

Growth Rate in Construction Jobs Slower Than in ‘All Jobs’

The U.S. economy’s average month-to-month increase in its total jobs count since January 2021 (13 months ago) has been truly impressive at more than half a million (+549,000). The construction sector, as a subset of ‘total,’ has not shared in this bounty. Construction’s month-to-month average employment gain over the same period has been only +13,000 jobs.

In January, as total employment in the whole economy swelled by +467,000 jobs, construction saw a contraction of -5,000 jobs. The not seasonally adjusted (SA) unemployment rate for ‘all jobs’ in the latest month was 4.4%. That’s only about a percentage point above the lowest figure to which the NSA unemployment rate is ever likely to descend. Construction’s NSA unemployment rate in January 2022 was 7.1%, up from 5.0% in December, but an improvement vs January 2021’s 9.4%. Prior to the pandemic, in both May and September 2019, the U.S. construction sector managed a pleasingly low NSA U rate of just 3.2%.

The total U.S. jobs count was +4.6% y/y in January 2022. Construction’s y/y jobs climb was less than half as fast, +2.2%. The most recent y/y jobs gains in other corners of the economy with close ties to the building sector have been: +8.3% for machinery and equipment rental; +6.0% for architectural and engineering services; +4.2% for both real estate firms and oil and gas extraction; +1.1% for cement and concrete product manufacturing; and -5.0% for building material and supplies dealers.

As an interesting aside, the ‘building material and supplies dealers’ designation is one aspect of bricks and mortar retail that has not experienced mass abandonment in favor of purchases made over the Internet. One reason has been the key logistics role played by such outlets in supplying the needs of local contractors and do-it-yourselfers. 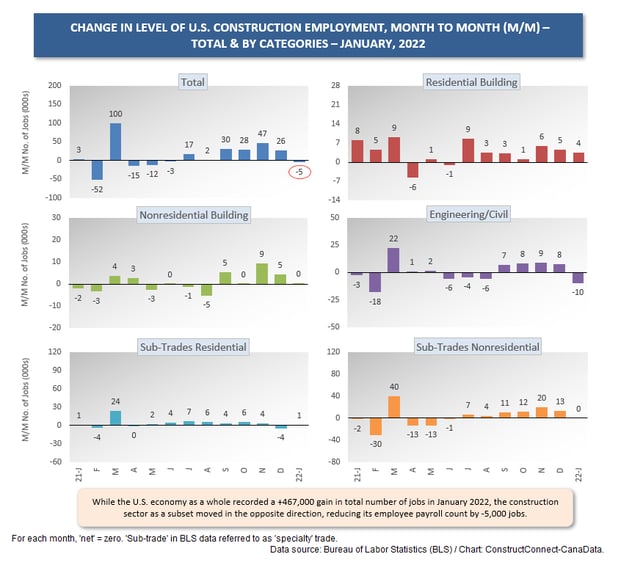 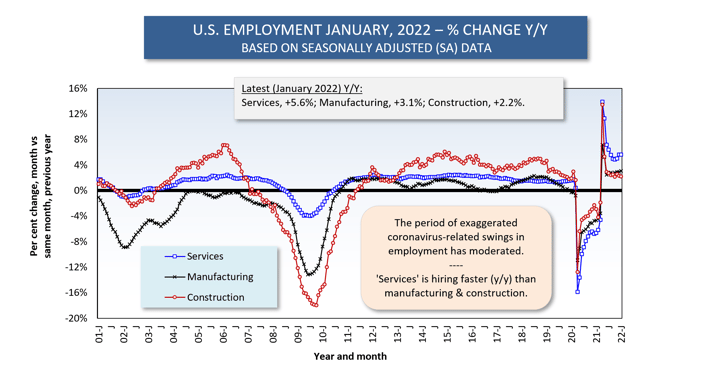 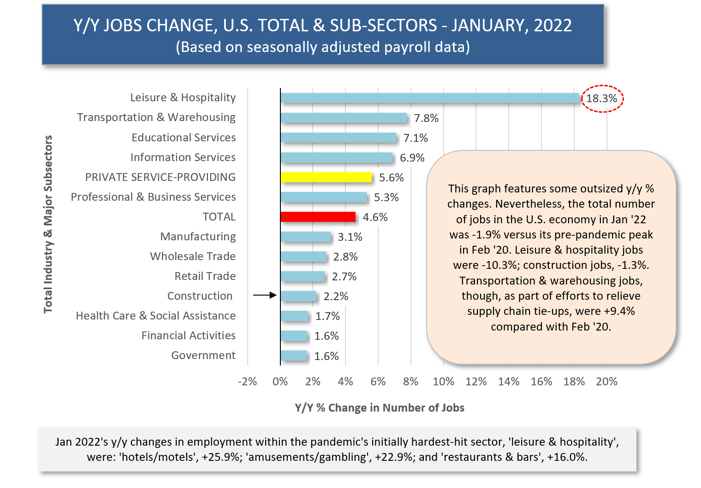 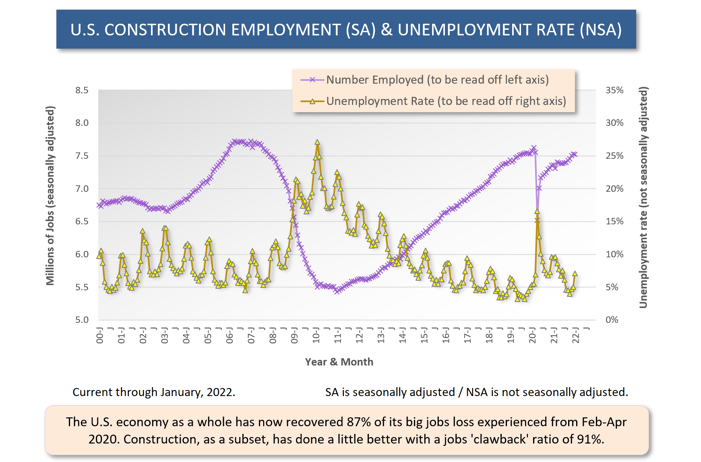 The -4.5% performance of total nonresidential starts in January of this year versus January of last year (y/y) resulted from declines of nearly equal magnitude in institutional (-13.0%) and commercial (-12.2%) that were not offset by the pickups in industrial (+5.3%) and heavy engineering/civil (+2.0%).

Accounting for a fifth of engineering starts, the ‘water/sewage’ subcategory in January was +27.3% m/m, but -2.5% y/y. Everyone is waiting for the first wave of Infrastructure and Investment Jobs Act (IIJA) money to appear on the scene.

Miscellaneous civil starts in January of this year were +298.4% m/m, but -42.7% y/y. The $2 billion electric power wind farm project this year helped with the m/m comparison. In the y/y standoff, however, this year’s mega project was overwhelmed by the $3.6 billion in power transmission line plus pipeline work launched in January of last year. 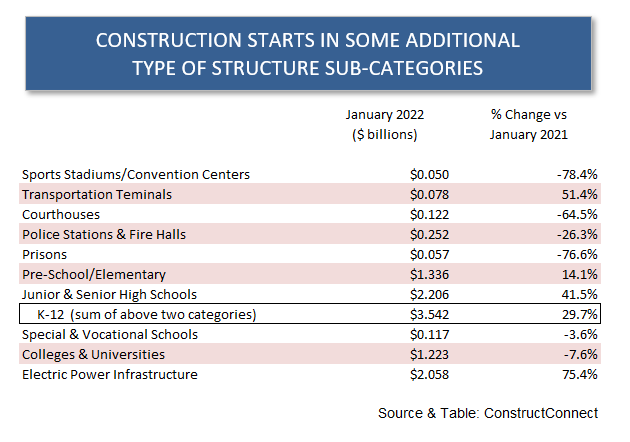 JOLTS a Clear Source of Frustration for Contractors

For ease of viewing, Graphs 5 and 6 show ‘smoothed’ curves (i.e., based on three-month moving averages) for the Job Openings and Labor Turnover Survey (JOLTS) results pertaining to vacant positions and hires.

Simply eyeballing the two graphs reveals a great source of frustration for contractors. Job openings in the sector, whether measured as a level or a rate, are currently as high as they have ever been. But there has been limited success in enticing potential workers to come on board in the sector. ‘Hires,’ as a level and a rate, aren’t far above their all-time floors. 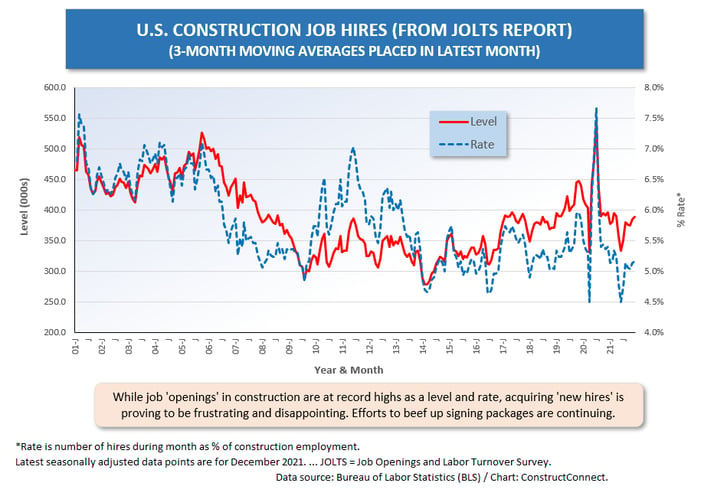 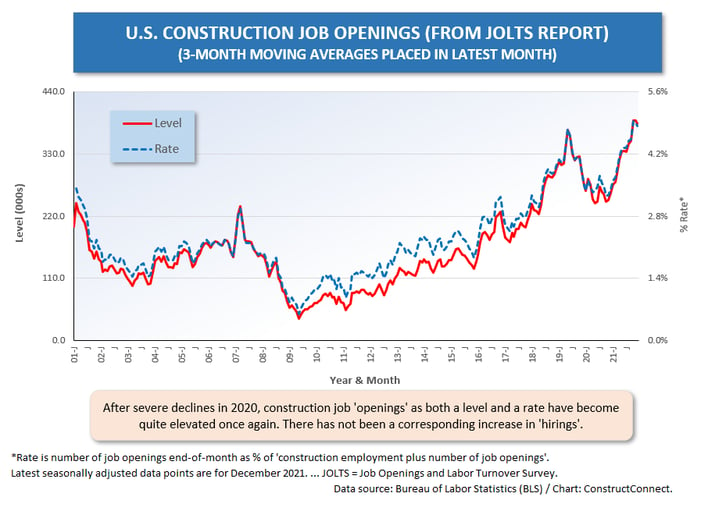 The slopes in most of the graphs have moved onto even plains. The steep drops of the early pandemic days are largely in the past. Sharp climbs, however, are not yet being realized.

Most noticeable concerning the latest month or two, are the ongoing descent for ‘miscellaneous civil;’ the leveling off for ‘schools/colleges;’ and the upward momentum being maintained for ‘roads/highways.’ ‘Private office buildings’ in January 2022 moved sideways.

Tables B-3 and B-8 of the monthly Employment Situation report, from the BLS, record average hourly and average weekly wages for industry sectors. B-3 is for all employees (i.e., including bosses) on nonfarm payrolls. B-8 is for ‘production and nonsupervisory personnel’ only (i.e., it excludes bosses). For ‘all jobs’ and construction, there are eight relevant percentage changes to consider. 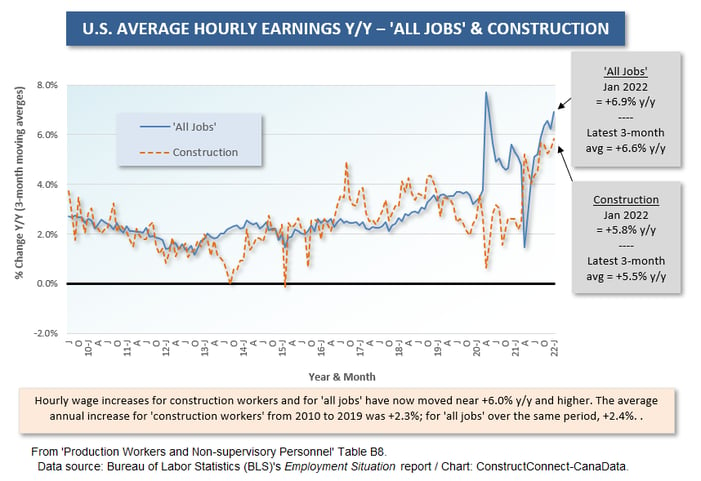 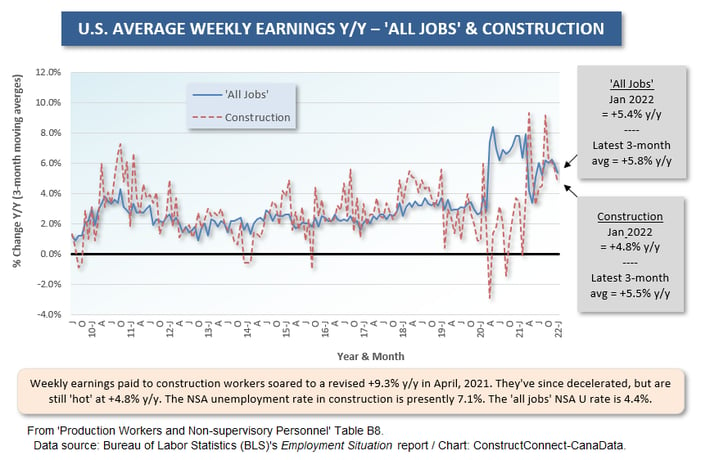 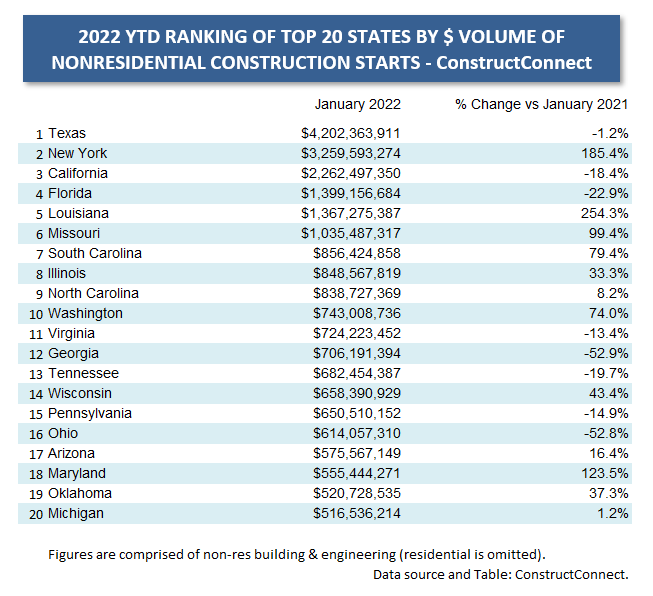 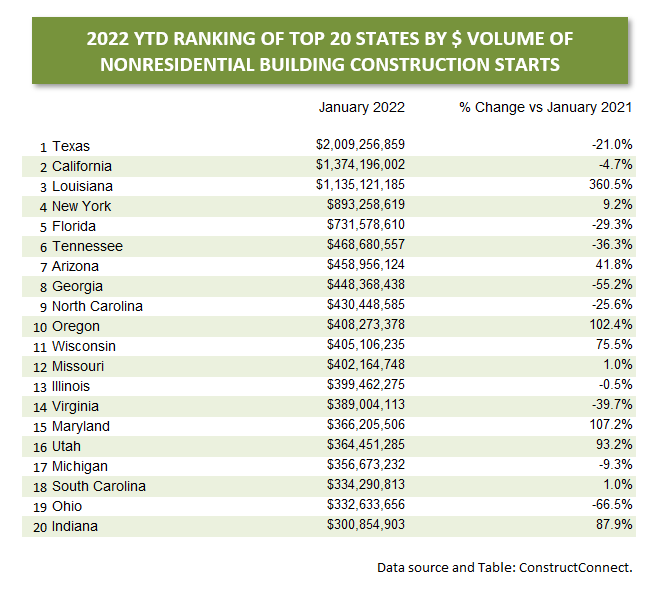 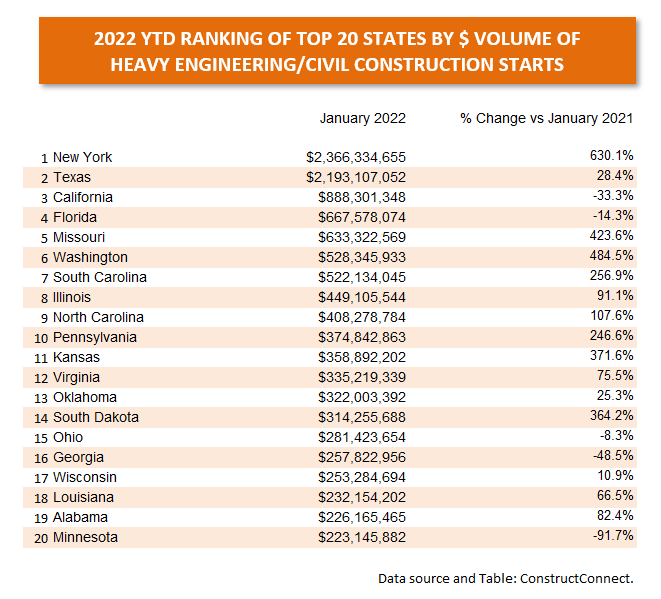 Including home building with all nonresidential categories, Grand Total starts in January 2022 were +5.8% m/m, although -2.3% y/y.

ConstructConnect adopts a research-assigned ‘start’ date. In concept, a ‘start’ is equivalent to ground being broken for a project to proceed. If work is abandoned or rebid, the ‘start’ date is revised to reflect the new information. 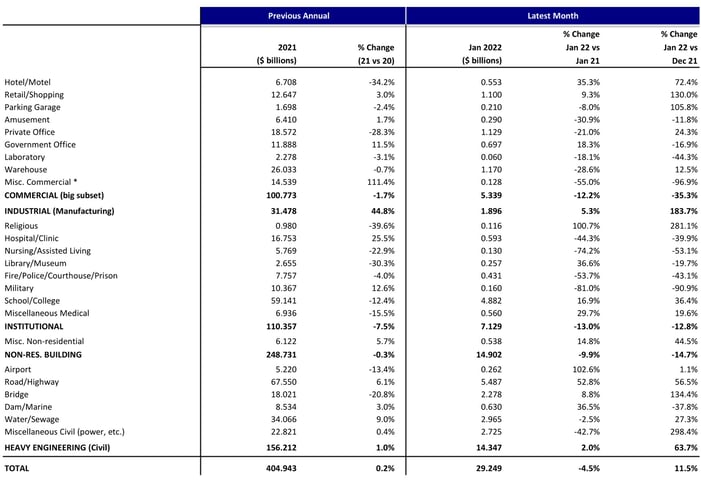 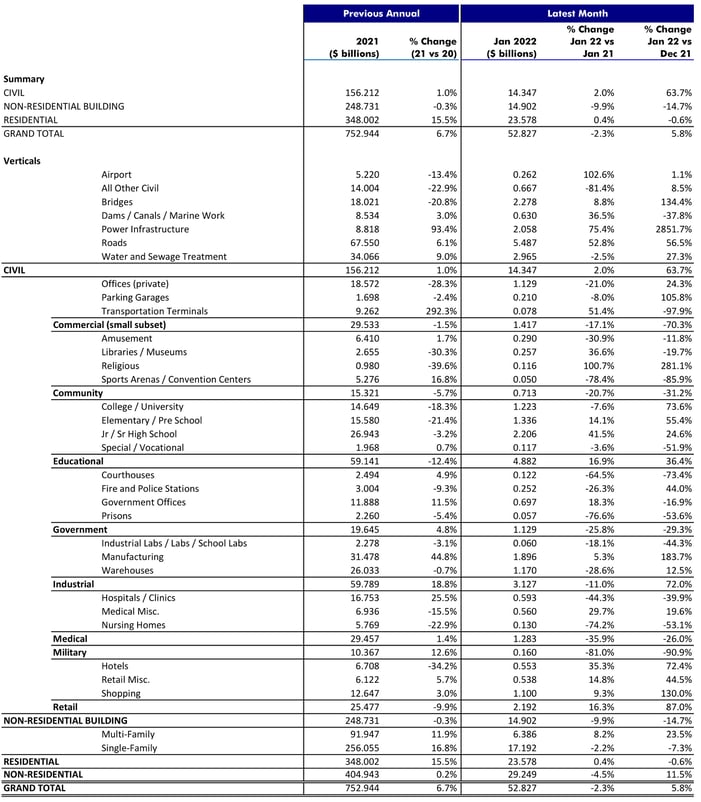 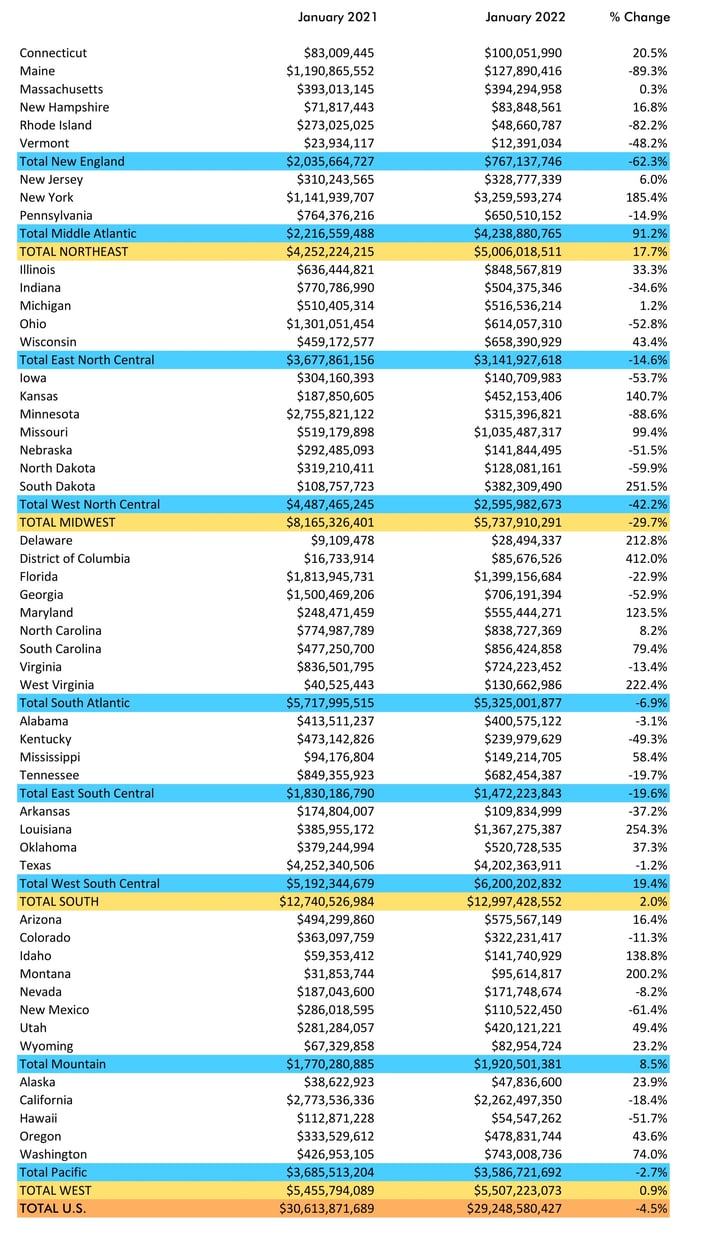