Megaprojects Slow to Kick In 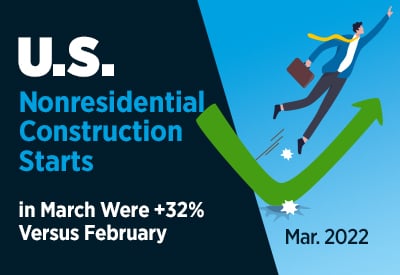 The latest month’s result, however, was -7.9% versus March of last year. As for year-to-date, the performance of nonresidential starts has been flat, +0.8%, relative to January-March 2021.

In the latest month, there were no mega-sized project start-ups. (A ‘mega’ carries an estimated value of a billion dollars or more). In fact, the largest project appearing among the Top 10 carries an estimated value of less than half a billion dollars. This year’s Top 10 list includes three roadway projects, two medical facilities, and two manufacturing plants

The dearth of megaprojects in the latest month is quite a departure from March of last year when there were three ultra-big projects totaling $4.8 billion. Last March’s three billion-dollar-plus groundbreakings included two hospitals and an auto assembly plant expansion

There’s an impressive array of huge projects in the planning stage. Almost certainly upcoming are billions of dollars to be spent on auto plants to produce EVs, and on new battery-making plants, plus computer chip facilities, and additions to steelmaking capacity. Furthermore, much of this work is not optional. It will need to proceed for the major corporations behind these plans to achieve, by 2030-2035, the net-zero polluting goals they have set for themselves.

Plus, there will soon be major project undertakings, primarily in the engineering construction field, to flow from financing allocated in the Infrastructure Investment and Jobs Act (IIJA).

Across the Board M/M Strength

On a month-to-month basis in March, though, all three subcategories were winners, with engineering at the forefront, +45.5%. Nonresidential building and residential were approximately half as robust as engineering, at +21.2% and +19.6% respectively.

Starts compile the total estimated dollar value and square footage of all projects on which ground is broken in any given month. They lead, by nine months to as much as two years, put-in-place (PIP) statistics which are analogous to work-in-progress payments as the building of structures proceeds to completion.

PIP numbers cover the universe of construction, new plus all manner of renovation activity, with residential traditionally making up two-fifths (about 40%) of the total and nonresidential, three-fifths (i.e., the bigger portion, at around 60%).

Over the course of the pandemic, though, the mix has undergone a profound shift. In 2021’s full-year PIP results, the residential to nonresidential relationship was approximately half and half. And that relationship, on a not seasonally adjusted (NSA) basis, was maintained in February of this year, with residential being 49.3% of the total and nonresidential, 50.7%. (Nonresidential is nonresidential buildings plus engineering). February is the latest available month for PIP stats.

PIP numbers, being more spread out, have smaller peak-over-trough percent-change amplitudes than the starts series. As an additional valuable service for clients and powered by its extensive starts database, ConstructConnect, in partnership with Oxford Economics, a world leader in econometric modeling, has developed put-in-place construction statistics by types of structure for U.S. states, cities, and counties, actuals, and forecasts. ConstructConnect’s PIP numbers are being released quarterly and are featured in a separate reporting system.

Construction’s share of total nonfarm employment in the monthly Employment Situation report is a little over 5%. To match March’s total job-count increase of +431,000, the figure for construction would have needed to be +22,000. The actual gain, at +19,000, wasn’t far off the mark. Half the climb in construction jobs occurred at the level of residential subcontractor trades.

The not seasonally adjusted unemployment rate for all jobs in March was 3.8%. For construction as a subset of all jobs, the NSA U rate was 6.0%. The 6.0% was an improvement on the 6.7% recorded in February and it was much better than March 2021’s 8.6%.

Construction reached a milestone in the latest month not yet realized by all jobs. Construction’s total level of employment climbed slightly above where it was in February 2020, before the coronavirus devastated job counts throughout almost all sectors of the economy. Construction’s jobs ‘claw back’ ratio, versus February-April 2020’s huge loss, is now 100.4%. For all jobs in the economy, the recovery ratio still falls short by a rung or two, at 92.8%.

The total jobs count in the nation is currently +4.5% year over year; for construction, it’s +3.0%. In other segments of the economy with close ties to construction, the latest y/y percentage changes in employment are: machinery and equipment rental and leasing, +10.7%; oil and gas exploration and extraction, +10.2%; architectural and engineering design services, +6.0%; cement and concrete product manufacturing, +4.8%; real estate, +4.7%; and building materials and supplies dealers, -1.5% (although their retail sales are +16.0% y/y, both SA and NSA). 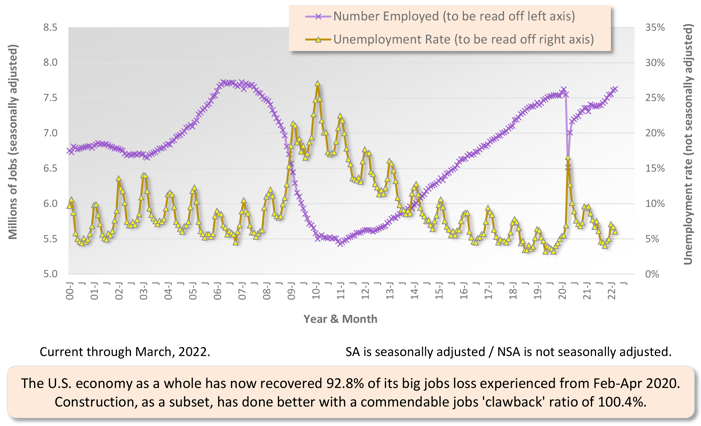 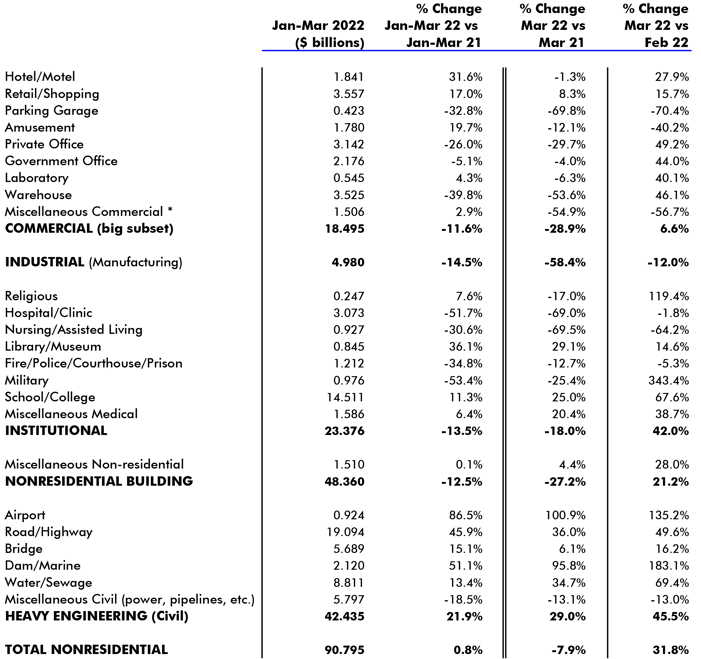 The -7.9% performance of total nonresidential starts in March of this year versus March of last year resulted from big dips in industrial (-58.4%), commercial (-28.9%), and institutional (-18.0%) that overwhelmed engineering’s quite decent gain (+29.0%).

There are two dominant subcategories of total nonresidential starts. When the volumes of roads/highways and schools/colleges are added together, they accounted for more than one-third of total year-to-date nonresidential activity in March 2022 (i.e., shares of 21.0% and 16.0% respectively, summing to 37.0%).

Among commercial starts in March, the hotel/motel and retail/shopping subcategories are surprisingly upbeat year to date, +31.6% and +17.0% respectively. Private office buildings and warehouses, though, are struggling year to date, -26.0% and -39.8% respectively.

Table 2: Construction Starts in Some Additional Type of Structure Subcategories

For ease of viewing, Graphs 5 and 6 show smoothed curves (i.e., based on three-month moving averages) for the Job Openings and Labor Turnover Survey (JOLTS) results pertaining to vacant positions and hires.

Openings in the construction industry remain extremely elevated. Both as a level and a rate, they are near their all-time peaks. But that’s not translating to much in the way of ‘hires’, according to the JOLTS numbers. Not only have hires, as a level and rate, been low recently relative to earlier this century, but they also have the unfortunate habit of following an uptick with a dip.

Employers in sectors throughout the economy are grappling with shortages of workers to fill vacant positions. One side effect has been substantial increases in compensation rates. 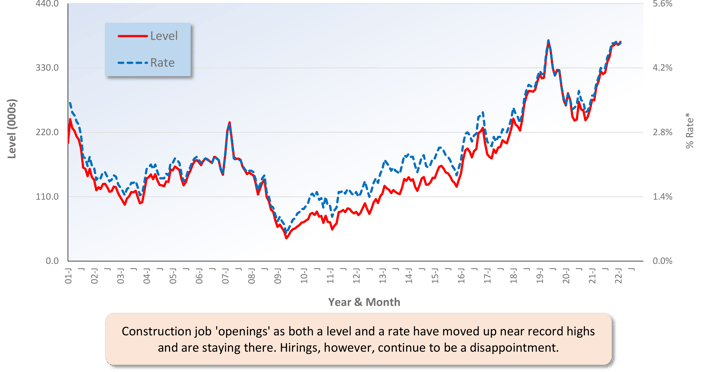 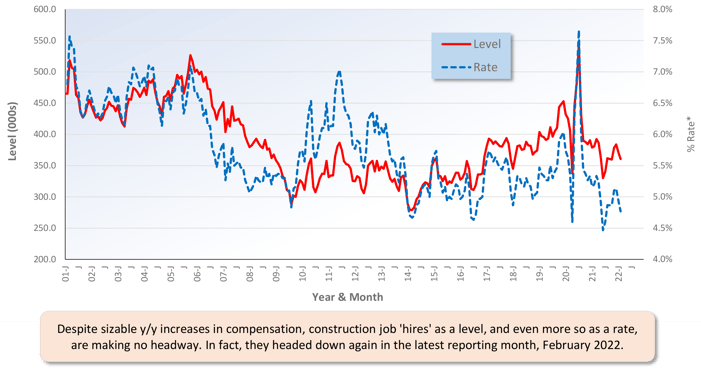 Interestingly, the retail trend line appears to have bottomed out and to be moving sideways. The private office building trend line is still sinking. There’s a slight uptick in schools/colleges, but it’s counterbalanced by a downturn in hospitals/clinics.

Roads/highways is the one clear champion, with a strikingly ascending curve, although water/sewage is also moving higher, but at a more relaxed pace. Miscellaneous civil and bridges are waiting for the big injections of infrastructure spending under the IIJA to regain their former growth momentum.

Solid, but Not Excessive, Advances in Construction Wages

Tables B-3 and B-8 of the monthly Employment Situation report, from the BLS, record average hourly and average weekly wages for industry sectors. B-3 is for all employees (i.e., including bosses) on nonfarm payrolls. B-8 is for production and nonsupervisory personnel only (i.e., it excludes bosses). For all jobs and construction, there are eight relevant percentage changes to consider. 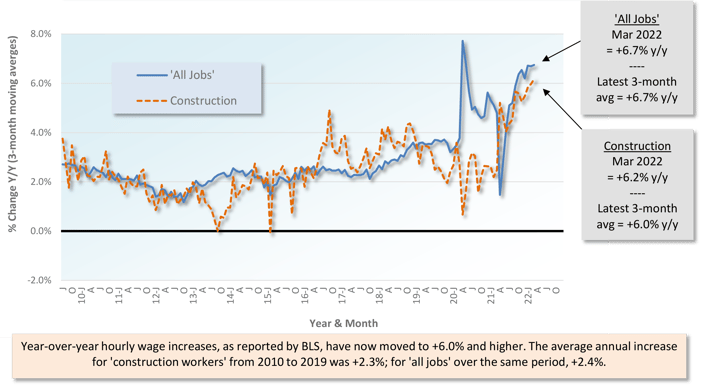 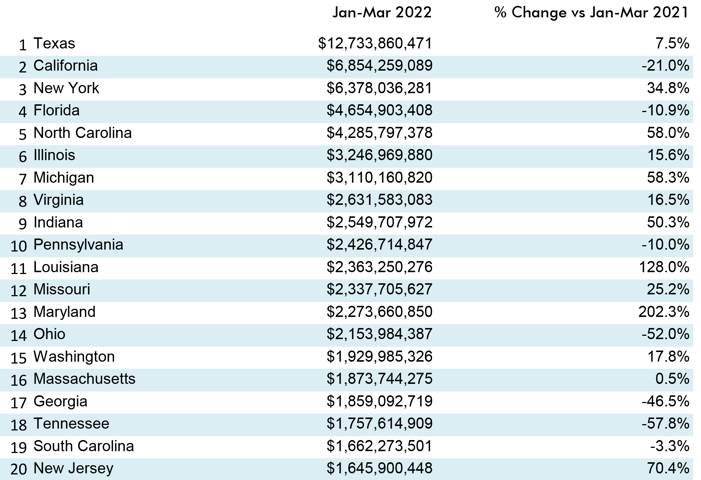 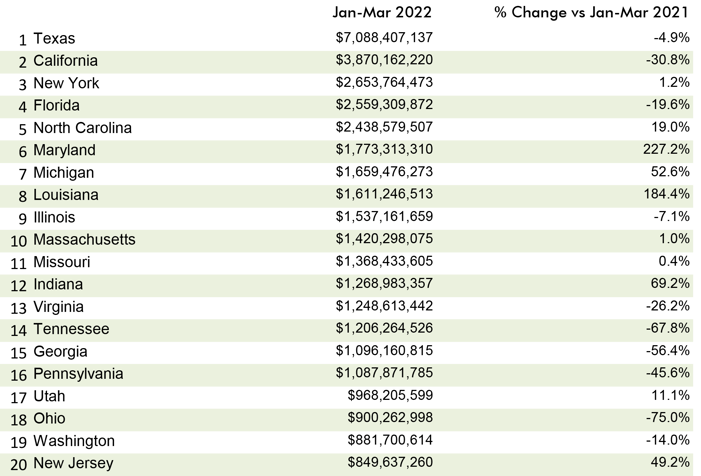 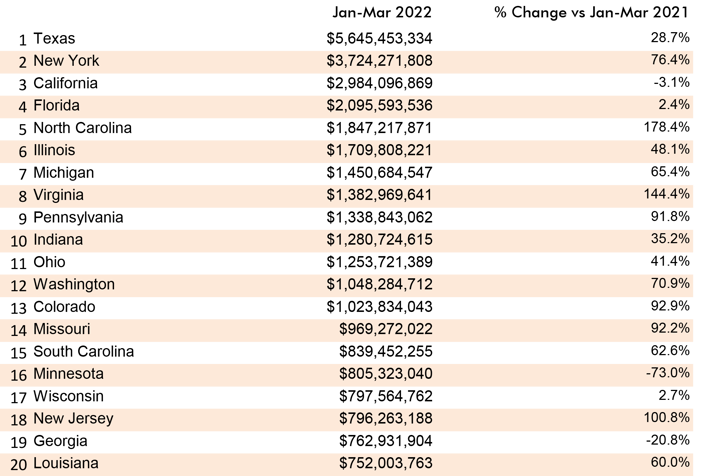 Earlier in this report, mention was made of bullish highway and street construction starts. Know also, though, that there’s a unique inputs to highways and streets PPI index and it’s +21.0% y/y.

The value of construction starts each month is derived from ConstructConnect’s database of all active construction projects in the United States. Missing project values are estimated with the help of RSMeans’ building cost models. ConstructConnect’s nonresidential construction starts series, because it is comprised of total-value estimates for individual projects, some of which are super-large, have a history of being more volatile than many other leading indicators for the economy.

ConstructConnect adopts a research-assigned ‘start’ date. In concept, a start is equivalent to ground being broken for a project to proceed. If work is abandoned or rebid, the start date is revised to reflect the new information.

The tailwinds supporting construction spending cannot be denied. The infrastructure needed to address North America’s civil and commercial market shortcomings provide a multitude of reasons to be optimistic about the near to mid-term building outlook. However, these segments of the economy constitute less than a third of all national output with the remainder generated by consumer spending. It’s unfortunate the outlook for this segment of GDP is not as sanguine.

Many of the headwinds that will slow consumer spending are the natural consequence of the more than $5 trillion U.S. government-backed spending spree begun two years ago. The financial sugar rush came at a time when companies were least able to absorb the extra spending as they grappled with disrupted supply chains and a significant contraction in the labor force.

This imbalance of supply and demand has resulted in prices increases that are outpacing wages. U.S. inflation-adjusted disposable personal income has fallen month-on-month in 10 of the last 11 months (ending February 2022), according to the Bureau of Economic Analysis. Rising interest rates, coupled with the return of student debt and home mortgage payment obligations, will generate further significant obstacles that could see consumer spending fall substantially and send the overall economy into a recession. 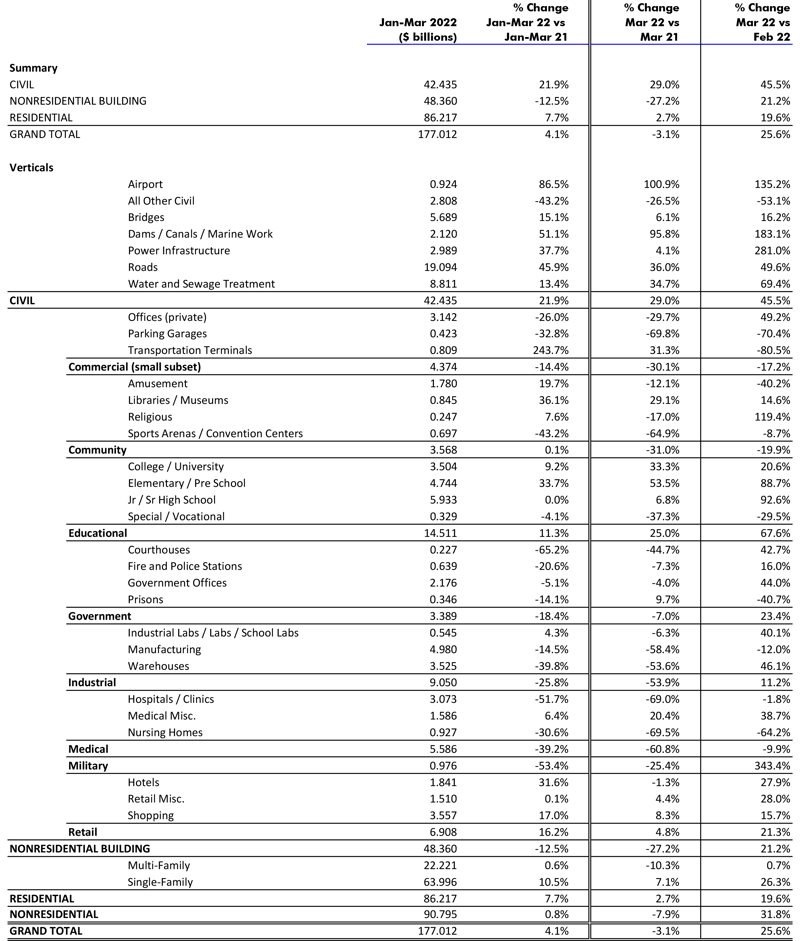 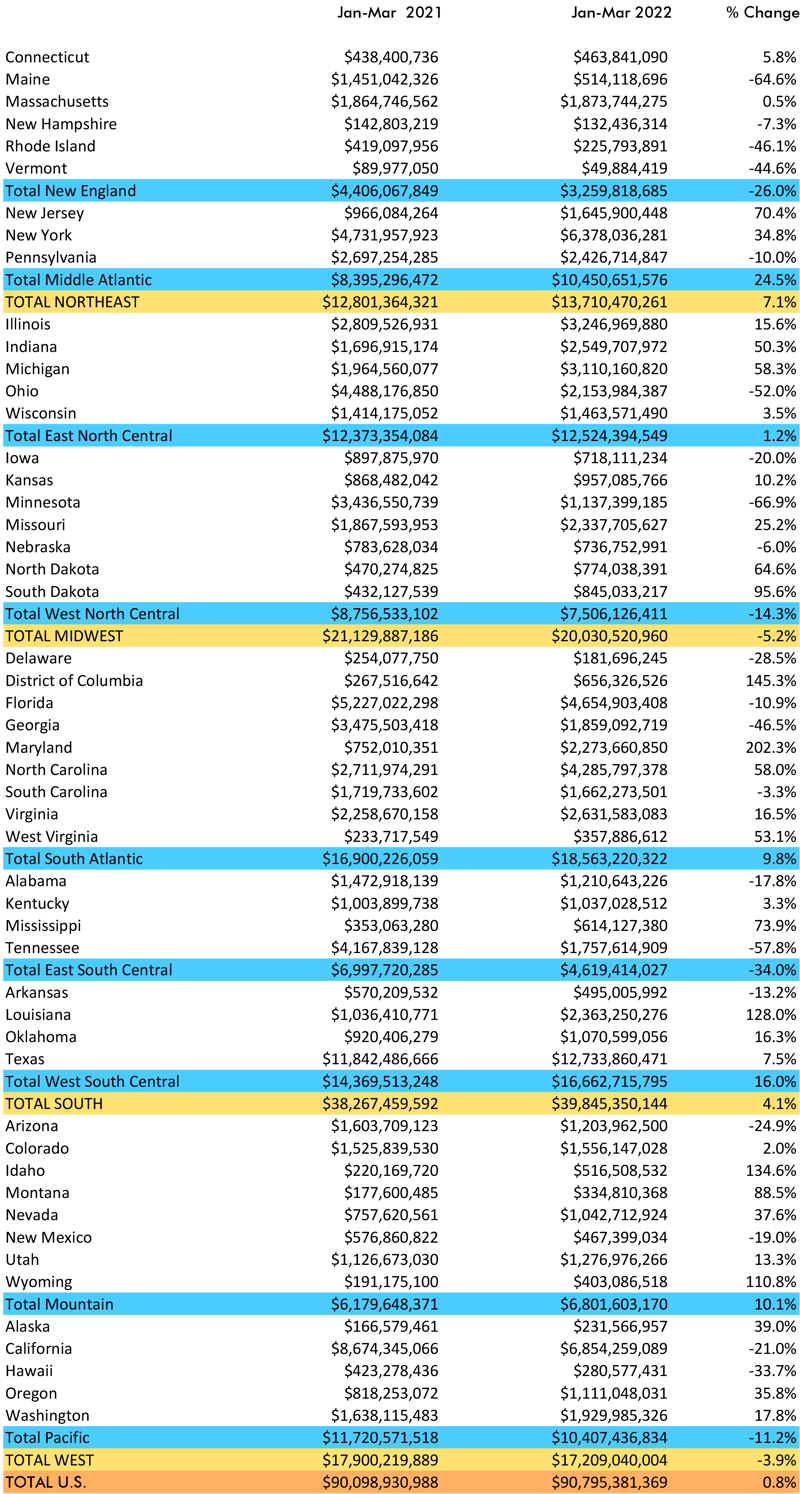