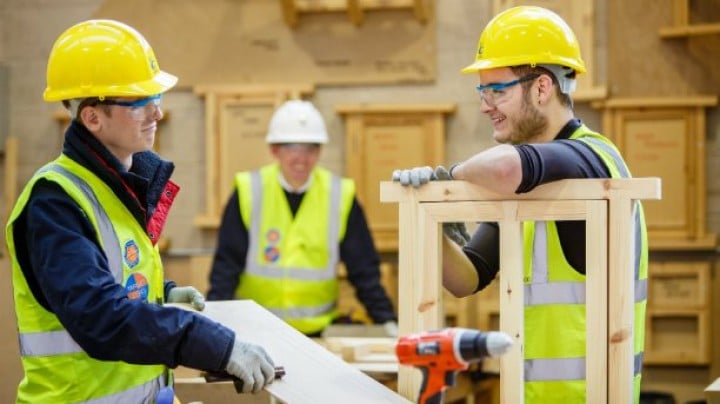 Apprenticeships play a vital role in supplying the construction industry with its skilled workforce. Unfortunately, at their current enrollment and completion levels, registered apprenticeships alone aren’t enough to meet the current and projected demands for the industry over the next decade. To be fair, apprenticeships have never been the sole provider of labor to the construction workforce but they are a key piece of the puzzle. The potential for apprentice programs to play a larger role in training and preparing the next generation of skilled labor is high, but changes are needed. Dealing with construction labor shortages has been a growing issue over the past few years and establishing a stronger network of apprentice programs can go a long way in resolving those issues.

Registered apprenticeships provide benefits to both workers and employers. According to the Department of Labor, the average starting wage for a registered apprentice is $15.00 an hour. (Compare that to the federal minimum wage of $7.25 an hour.) Apprenticeships involve a mix of on-the-job training and classroom instruction for a specific occupation. The average registered apprenticeship program lasts four years and typically involves about 2,000 hours of on-the-job training and 144 hours of classroom instruction each year. Those who complete an apprenticeship are awarded a nationally recognized certificate of completion from the Department of Labor’s Office of Apprenticeship. The earn while you learn approach can be an attractive alternative to obtaining a two- or four-year degree.

There are a number of benefits for employers willing to invest the time and resources in creating an apprentice program, regardless of whether its registered or not. For starters, you can create your own pipeline of workers to meet the current and future needs of your business. Employers who run their own programs can craft the training to your standards, meaning employees perform the work to your company’s expectations. Establishing a company sponsored apprentice program conveys the message that you are invested in the future of your employees. Their success is tied to your success which can lead to employee loyalty and increased productivity and can save you money in the long run by decreasing your turnover rate.

So how much do apprenticeships contribute to the construction workforce? For starters, there isn’t any reliable data on the number of unregistered apprenticeships, like receiving a diploma or certificate in plumbing at a local community college.  The Office of Apprenticeship captures data for the 25 states that are federally regulated along with data from nine of the SAA states in their Registered Apprenticeship Partners Information Management Data System (RAPIDS).

In 2015, there were 9,935,000 people employed in the construction industry. If we take out occupations like management, sales, administration, etc., there were 6,347,000 people employed in construction and extraction occupations in the construction industry. If 257,076 of those were active apprentices, that’s only 4% of the workforce. Even more disturbing is the number of those completing apprenticeships. For the last five years, the average number of those completing programs is about 44,643 a year. If we apply the assumed 73% of that is made up of construction apprentices it comes out to just 32,589 a year.

Despite all the benefits of getting involved in registered apprenticeships either as an employee or an employer, there are still a number of challenges that need to be addressed.

A 2013 report by The Aspen Institute Workforce Strategies Initiative, Apprenticeship Completion and Cancellation in the Building Trades, looked to identify the causes for apprenticeship cancellations and the barriers to completion. Of the apprenticeship agreements started between 2006 and 2007 only 36% had completed by May 2012 with 46% cancelled and 18% still active. The report noted that even in times of economic growth the cancellation rate can be as high as 50%.

Some of the reasons cited in the report included apprentices not being prepared for the strenuous work environments, layoffs, inadequate on-the-job training, low pay, and inhospitable workplaces including discrimination and harassment toward women and minority apprentices. These all can easily be addressed by apprentice sponsors and corrected. Other issues that aren’t as easy to solve that were cited were managing work-life balance along with classwork and not having strong enough math skills to adequately handle to coursework.

There have been a number of programs established over the past few years to grow apprenticeships. For example, last year the Department of Labor began soliciting applications for American Apprenticeship Grants with total funding of $100 million to support public-private partnerships to either develop or expand apprentice programs in high-growth industries. These were funded by immigration visa fees.

Greater outreach and retention in apprenticeships for these groups are needed since they tend to have high cancellation rates. Employers and apprentice sponsors need to work more closely with community colleges and high school career and technical education (CTE) programs. The goal is to get these groups interested in pre-apprenticeships and other programs and introduce kids to careers in construction. Programs like YouthBuild and the ACE Mentor Program are great examples.

According to the Bureau of Labor Statistics, employment in construction and extraction occupations is expected to grow by 10% between 2014 and 2024, higher than the national average at 7%. Some of the construction occupations with the highest number of active apprenticeship participation are expected to have higher than average employment growth like electricians at 14%, construction laborers and roofers both at 13% and plumbers at 12%. By investing and establishing apprentice programs in these high growth occupations will ensure the construction industry is ready to meet the labor demands in the future.