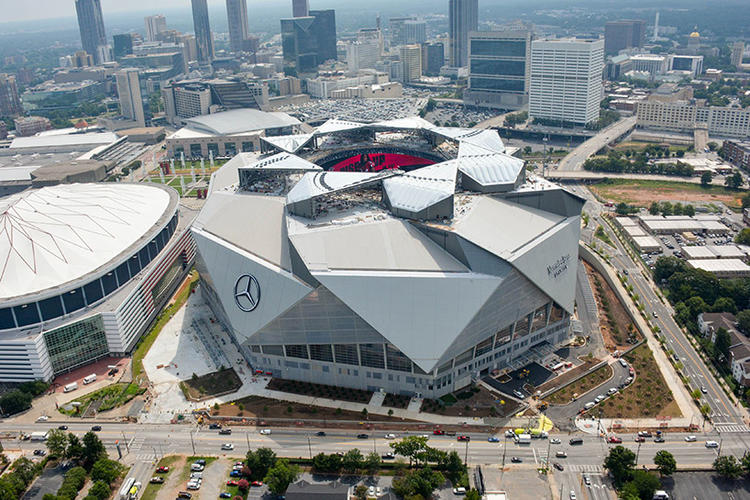 As we get ready to bid farewell to 2017, it’s time to release ConstructConnect’s list of “Top 5 Coolest Buildings” of the year. Criteria for inclusion on the list is simple. The building has to have been completed, topped out or opened within the calendar year and has to have some aspect that makes the building cool. This could be the architecture, sustainability elements, construction method, technology, or some combination of these elements.

In no particular order, here is our list for 2017: 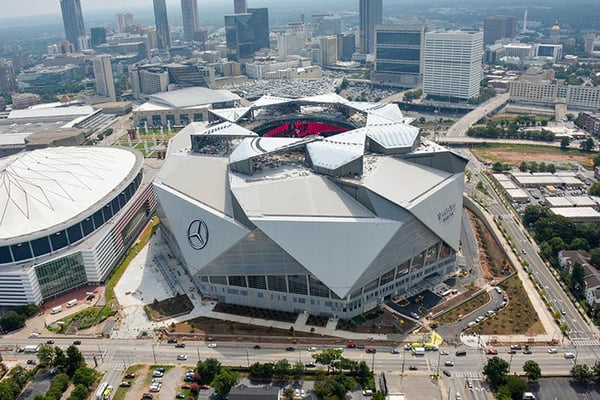 The stadium boasts the largest non-transparent LED video display board at nearly 62,000 square feet. The circular display measures 58-feet by 1,075-feet and hangs just below the stadium’s retractable roof. Speaking of the roof, it’s made of eight 500-ton translucent panels resembles a camera shutter when it opens and closes. The stadium also features a 100-yard-long bar and a four-story falcon statue that weighs 36 tons.

Sustainability was a big part of the stadium’s design and the 400 solar array produces enough to power the stadium for 10 Falcons games or 13 United FC games. There is also a 680,000-gallon cistern for collecting rainwater for use in the cooling tank and for irrigation. 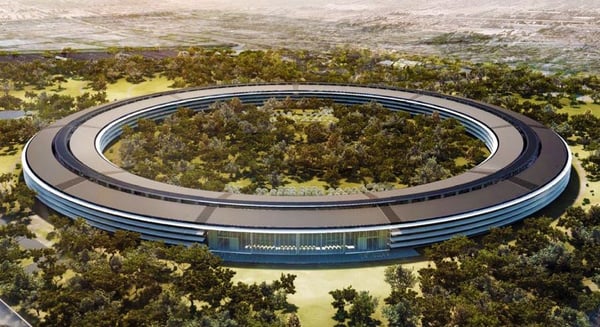 Conceived by the late Steve Jobs as the company’s “shot at building the best office building in the world,” and designed by Norman Foster of Foster + Partners, Apple’s new 2.8-million-square-feet headquarters, at an estimated cost of $5 billion, makes quite a statement. Nicknamed the “spaceship,” the circular building is one mile in circumference and has a diameter of 1,512 feet.

The building was designed and constructed with the same precision and attention to detail that goes into the company’s signature products. From the seamless interior to the 45-foot-tall panels of curved safety glass that make up the exterior walls, no detail was too small. The company’s head of design, Jony Ive, even had a hand in designing the elevator buttons and toilets.

The inner courtyard encompasses nearly 30 acres and includes a pond and fruit trees. The building is naturally ventilated and powered by an 805,000-square-foot solar array and Bloom Energy Server fuel cells. The café features two massive 440,000-pound glass doors that extend the full four stories of the building and are operated via mechanisms hidden underground. 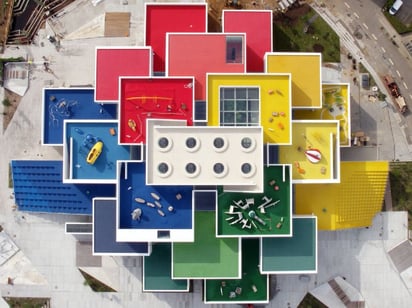 How could we not include a building inspired by LEGO bricks and design by BIG (Bjarke Ingels Group)? The 129,000-square-foot experience center, designed using the dimension of the iconic building blocks, is located in the birthplace of LEGO. The building resembles 21 giant LEGO bricks stacked on top of each other. The keystone at the top has eight circular skylights to resemble the studs on top of a LEGO brick. Even the white ceramic tiles on the building’s façade use the dimension of the two-by-four LEGO brick.

The building has four experience zones denoted by different color roofs, three restaurants, a public square and museum. The building also houses one of the world’s largest structures ever built. The “Tree of Creativity” stands nearly 50-feet tall and is made using over 6.3 million LEGO bricks and took 24,530 hours to complete. 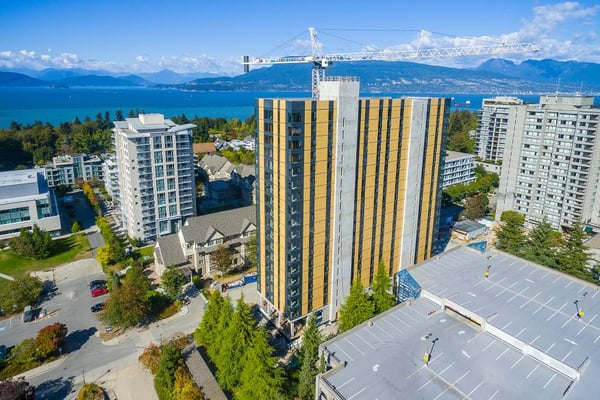 Mass timber is fast becoming a sustainable alternative for structural building components to replace steel and concrete. The 162,700-square-foot building was designed by Acton Ostrey Architects and structural engineering firm Fast + Epp. The use of mass timber allowed the project to reduce its carbon footprint by 2,680 tons.

It took less than 70 days to assemble the structure after the mass timber components were delivered to the site using a crew of just nine workers. The building will be pursuing LEED Gold certification. 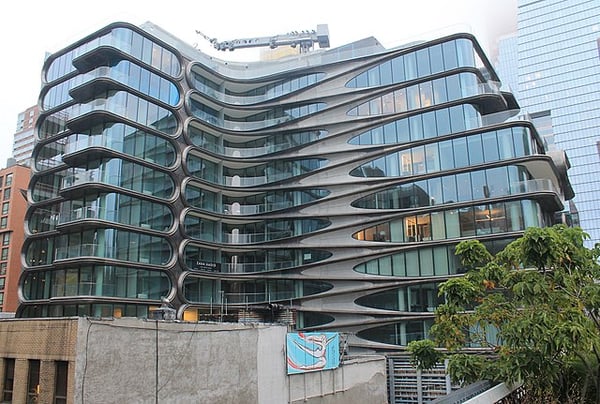 The last entry on our list, 520 West 28th Street, was one of the last projects designed by the late Zaha Hadid. Hadid, the first woman to win the Pritzker Architecture Prize, passed away unexpectedly last year. The 11-story, L-shaped luxury condo building sits along High Line Park in Manhattan. The curved metal elements that make up the façade of the futuristic condo building were handcrafted by M. Cohen And Sons of Philadelphia.

The high-end condo building features a private IMAX theater, an automated valet system in the parking garage and storage units controlled by robots. There is also a 75-foot sky-lit lap pool and fitness center with a 24-hour juice bar. The 190,000-square-foot building features 39 condominiums and about 11,000-square-feet of retail space. 520 West 28th Street was Hadid’s first building in New York.

Contractors Should Be Embracing BIM Adoption Read this Blog Post