Wages in the construction and manufacturing sectors continued to push higher early in the fourth quarter of 2022. The average hourly compensation for all employees in the construction sector ended October 2022 at $35.27, an increase of 13.2% from the end of 2019. Similarly, manufacturing wages have increased from $28.16 at the end of 2019 to $31.23 in October, notching a smaller gain of 10.9%.

Unfortunately, in neither case are wages keeping pace with inflation. Using the Consumer Price Index, the purchasing power of the average construction worker wage is 3% less when compared to the end of 2019; that decline is closer to 5% for manufacturers. 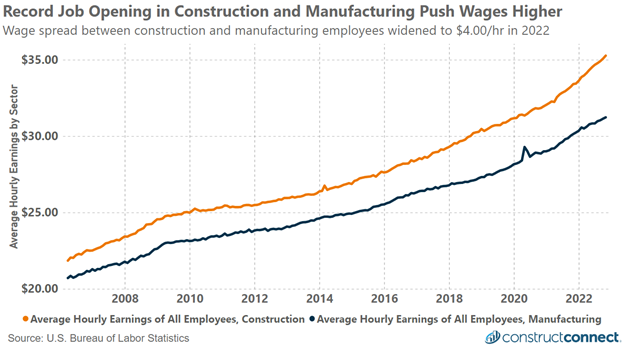 Average Hourly Wages by Sector for All Employees, by date:

In contrast, the manufacturing sector has seen the pace of wage growth slow, with rates of 4.4% and 3.6%, respectively. This comes despite the surge in unfilled manufacturing positions that occurred between mid-2020 and mid-2021, when unfilled positions increased from 342,000 to 943,000. 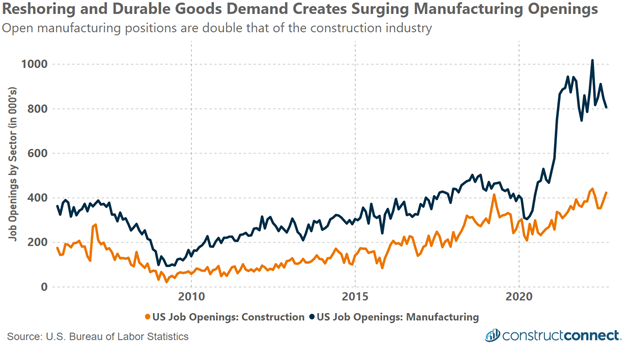 As inflation continues to rise faster than the rate of wage growth, finding and retaining talent will be a core challenge to the construction industry. Future pay increases will have to be considered within the context of inflation and the eroding power it has on wages.

Historically an employee asking for a 7-8% pay increase year after year would have been perceived as greedy or out of touch with reality. Yet, in the current environment, an employee who merely wants to maintain their family’s standard of living from just a year ago is forced to make that very same request.

The allure to maintain what they once had will be a very strong inducement for them to seek new opportunities, which will only worsen the industry’s greater labor problem. Put this way, managers need to address these seemingly lofty requests with a level of understanding and empathy that contradicts historic norms.