The National Association of Realtors January data release, covering activity for December 2022, pointed to a 10th consecutive month of quickly declining U.S. existing home sales. December’s reading of 4.02 million units was hardly different from the 4.01 million units reading, recorded soon after federally mandated lockdowns forced many title and realty offices to cease normal operations. To find an equivalent period, one must return to the worst depths of the Great Recession in mid-2010 to find a period when existing home sales activity was below the latest recorded level.

Since 1998, substantial, noncyclical changes in the direction of existing homes sales volumes have preceded the same-direction movement of existing home sale prices. The last time that volumes fell in this manner was during the Great Recession, when home prices declined by over 25%.

While the contextual parallels are not entirely similar, general conditions today bode ill for a market that saw home price appreciation climax in the last six months. At its peak in June 2022, the median existing-home sales price exceeded $420,000, an increase of 122% from a decade ago. In comparison, median family incomes over the same time increased by only 50%. 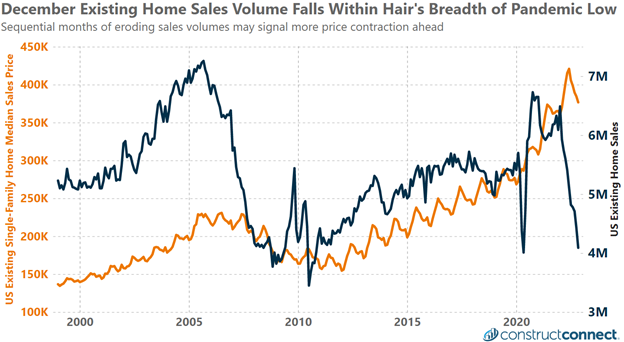 The potential for a prolonged decline in existing home prices as we begin 2023 is likely to challenge the pricing power of home builders of all types. Furthermore, builders will need to contend with the additional prospect of falling volumes based on the latest single and multi-family permit authorization counts.

Since climaxing in February 2022, single-family permit authorizations have reported sequential months of declining volumes on a seasonally adjusted annual basis, a trend that has not abated. Multi-family permit counts, in contrast, remained robust throughout 2022 until December’s reading marked a 20% decline in activity compared to year-ago levels. December’s reading was the lowest in the last 15 months and even fell below pre-pandemic volumes based on Q4 2019 data. 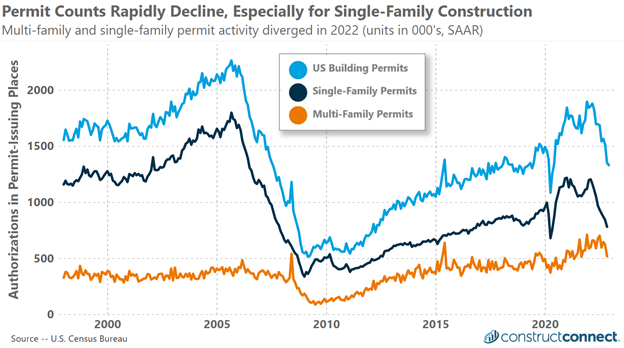 Will Canadian Homebuilders See a Housing Preference Shift in 2024? Read this Blog Post