Despite Sector Headwinds, Multifamily Housing Has A Great Future Potential

Residential construction firms can partially insulate themselves from a market correction by understanding that different factors—each with their own unique causes and timing—affect the single and multi-family housing market.

Over the last two years, the market for U.S. housing has undergone an unprecedented number of shocks, the sum of which has added up to a market that now looks vastly different. The lack of new home supply because of labor and material shortages among builders combined with a recently ended and nearly two-year-long moratorium on home foreclosures resulted in a significant undersupply of available homes for sale and consequentially soaring market prices. 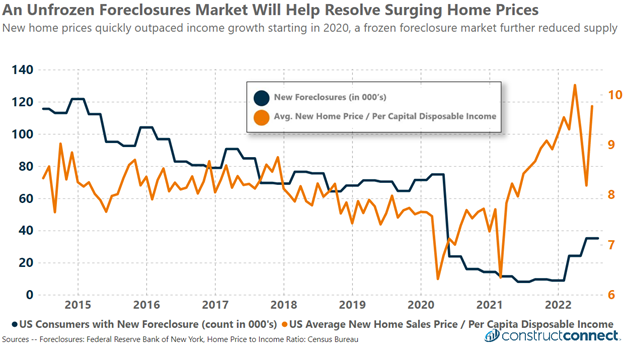 At the same time that supply has been—and continues to be—uniquely challenged, the demand for housing of all types, and in particular single-family, soared. Onerous COVID-19 restrictions drove many out of densely populated cities and into relatively more spacious single-family homes largely in suburban environments.

Facilitating this exodus were historically low interest rates on 5-year ARM and 30-year fixed mortgage rates of under 2.5% and 3.0%, respectively. Evidence of this transition was apparent in the volume of authorized permits data for single-family homes which jumped 20% from Q4 2019 to Q4 2020 and remained substantially elevated through the early months of 2022.

For contractors, this combination of limited supply and strong demand resulted in a rapid increase in the number of total homes under construction which as of July 2022 had risen to 312,000 (SAAR), a number that very nearly matches the peak level of homes that were under construction just a year before the 2008 Great Recession.

In the single-family space, this imbalance of supply and demand between July 2020 and June 2022 resulted in the longest continuous period in which monthly starts exceeded completions. During this period there accrued 3.86 million more units started than completed, a record high since recordkeeping began in 1980. For comparison, the prior record was recorded in 1984 at 3.05 million units.

Even in the run-up to the Great Recession this spread barely exceeded 2.3 million units. At its present 2022 rate of 1.1 million home completions on an annualized basis, the single-family residential construction industry has more than a three-year backlog of unbuilt homes based on the accumulated spread in permits to completions. 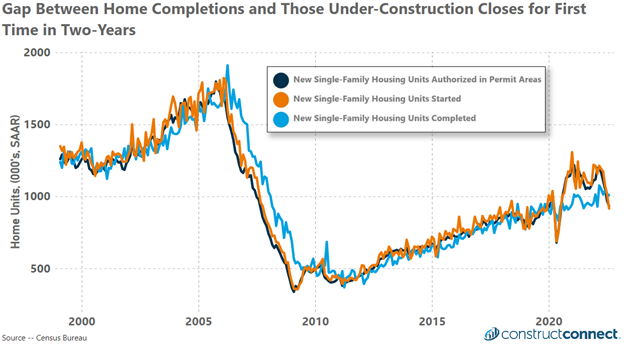 Looking to the second half of 2022 and beyond, the financial tailwinds that had supported the growth of the housing—and especially the single-family—market previously now have shifted into reverse. Mortgage rates have nearly doubled from their 2021 lows, raising the cost of comparable mortgages by several hundred dollars per month. Straining potential homeowners’ cashflows further, the median home price in the two-year period ending Q2 2022 increased by 36% to over $440,000.

As a result, the median home price in mid-2022 is now nearly five and a half times the median family income, far above the historic average of three. An inflated home-to-income ratio, rising interest rates, and rising overall inflation are now all working against the ability of buyers to further support the housing market.

The Silver Lining: Multifamily Homes and the Millennial Generation

Despite the present and near-future challenges in the residential market, the more business-oriented—and for those homeowners willing to substitute, more affordable—multifamily segment remains vigorous and is well positioned to benefit from the robust 72.1 million millennials born between 1981 and 1996, putting them between 26-41 years old. This group, with an average pretax household income of nearly $72,000, according to 2020 Census data, and averaging $127,000 in total assets would find multi-family housing a far more affordable housing and asset-building option.

Historically though, the multi-family segment has been the domain of real estate investment firms, the financial dynamics of which are in ways different from those factors that impact the demand for single-family homes. Permits and authorization data from 2005 to 2010 bear this out as the single-family market began correcting as early as Q4 2005 and yet the multifamily market continued almost unaffected until Q4 2007 (see chart below). Recent months of housing permit data at the single and multifamily levels again appear to illustrate early indications of this bifurcation in the collective residential market.

During the first half of 2022, mortgage rates increased from 3.2% in January to a high of over 5.8% in late June. This sharp increase coincided with a 20% decline in the number of existing single-family homes sold and a 22% decline in the number of new single-family permits. These declines stand in stark contrast to the 19% gain reported in permits of multifamily structures with five or more units in the year-to-date period ending July 2022.

Rising interest rates have had little if any discernable impact on multifamily housing demand which has grown steadily since early 2020. Since April of 2020, multifamily permits for five or more housing units have grown by 88%, trumping comparable single-family growth at 38%. As recently as February 2022, the growth in single-family permits had been 77%, illustrating how severely this market has been affected by the changes in financial markets. 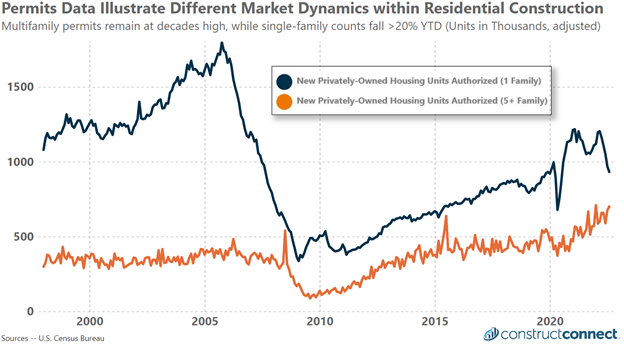 Success in the residential construction industry over the next 18 months, and potentially longer, will require industry leaders to think broadly and carefully about how their future success will be dependent upon the nexus of financial markets, household demographics, construction costs, and supply chain dynamics.

Using historic market insights as a guide, residential construction firms and building product manufacturers may find it to their advantage to market to and service both the single-family and multi-family markets as near-term headwinds likely worsen yet affect each segment at slightly different times. The timing difference in market changes could help insulate revenue levels and operational efficiencies from being excessively impaired by market corrections.