Large Domestic Banks Grow Their Loan Portfolios at Fastest Pace in 14 Years, Can it Last?

Large U.S. domestic banks at the start of September 2022 had $1.46 trillion* in commercial and industrial loans outstanding; representing an 18% increase from a year ago. This marks the fastest expansion in C&I loans from the large banks category since 2008.

It is difficult to argue that this will last long, however, given the efforts by the Federal Reserve to slow inflation by curtailing borrowed spending. As the Fed’s rate actions work their way through the economy borrowing costs will rise, lowering returns on invested capital. As a result, a rising number of planned investment projects will never see the light of day for lack of sufficient expected returns.

As the Fed slows the economy down, the risk of a recession will logically rise. The natural response by banks to this action will be to raise lending standards and hedge their loan exposures as the economy moves toward a potential recession as any slowing would be apt to do. The latest Federal Reserve Senior Loan Officer Opinion survey from July 2022 indicated that nearly one-quarter of banks had already begun tightening standards for C&I loans to firms of all sizes.

As credit becomes more difficult to utilize, cash conservation will take on greater importance to the long-run success of construction firms and related product manufacturers. Construction firms would be wise to ask themselves how they will navigate a business environment in which their current and future projects are at a heightened risk of postponement or cancellation. Furthermore, how will they manage customers who are more likely to run out of cash or be denied access to former lines of credit? 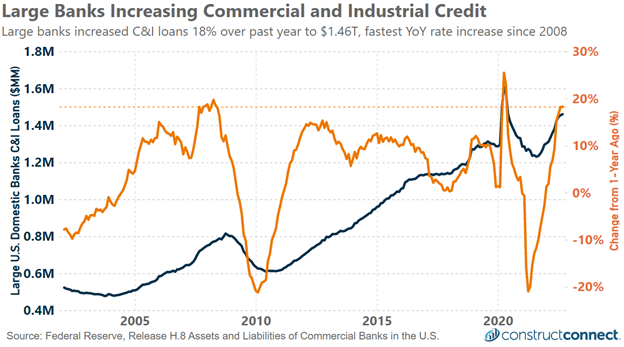 *Seasonally adjusted per the Federal Reserve in their H.8 Assets and Liabilities of Commercial Banks in the U.S. report