In mid-2022, overall inflation by some measures was approaching 9%, a 40-year high following more than a decade of historically low inflation rates. However, for manufacturers, distributors, and others purchasing raw materials, 9% annual inflation pales in comparison to the kinds of price swings these firms experienced for their raw materials beginning in mid-2020. For construction firms and product manufacturers, the last two years have been spent trying to raise output prices fast enough and high enough to cover rapidly increasing input costs. 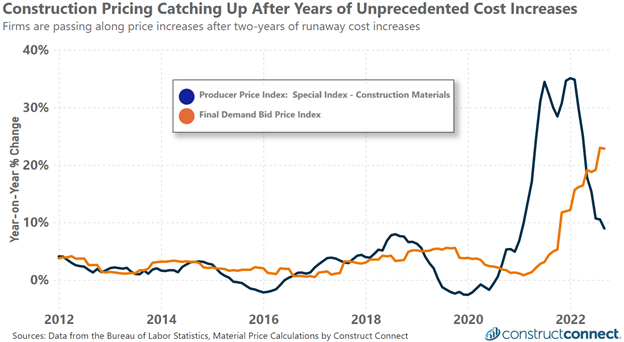 To further combat the recent volatility in upstream product costs, industry leaders should once again consider searching abroad for at least some portion of their inputs. There are at least two reasons for this that have little to do with the cost of domestic production and prices. The first is the continuing decline in the cost of international shipping and the second is the strength of the U.S. dollar. Both factors will benefit those firms willing to rebuild and restart their international supply chains as we enter 2023 and beyond.

Container rate prices are well off their pandemic highs and are expected to fall further over the foreseeable future. Data from Drewy points to across-the-board accelerating declines in 40-ft container shipping spot rates in the year-to-date period. Recent rates from Shanghai to Los Angeles at $3,000 are well below the $11,000 rates quoted a year ago.

Additional pricing pressure over the long run will come from the spree of new vessels slated for completion in 2023 and 2024 according to data from Alphaliner and reported by FreightWaves. According to their research, there are expected to be 2.4million and 3.0 million twenty-foot equivalent units of capacity delivered in 2023 and 2024 respectively.

Should the 2024 figure become reality, it would smash the prior record by around 1 million TEUs. Such an influx of capacity could significantly tip the balance of supply and demand in favor of international shipping customers. In past periods, substantial surges in container shipping capacity resulted in future years of falling and depressed shipping rates.

As the economic prospects of other parts of the world decline, especially in Europe where energy has been weaponized as part of the war in Ukraine, the safety and stability of the dollar will give it an appeal against other currencies that will work to the benefit of those manufacturers and distributors able to capitalize on cheaper priced imports. 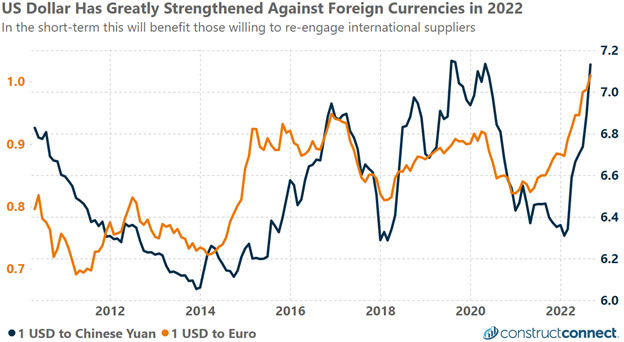 For more insights, check out 5 Things You Must Know About the Economy Right Now.

Impact of Inflation on Construction Readings Read this Blog Post