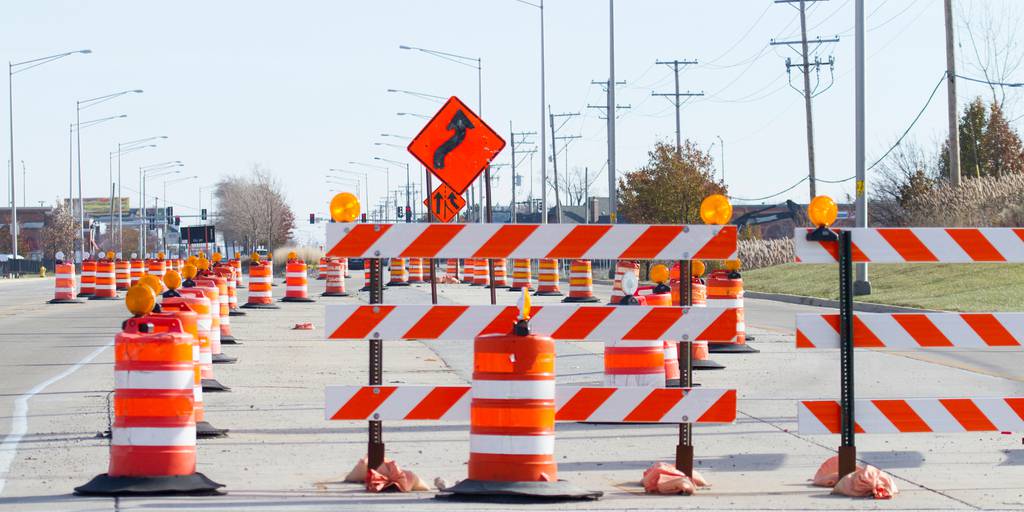 In light of National Work Zone Awareness Week, we found it pertinent to address the proper procedure for redirecting traffic and utilizing proper signage in work zones. Due to the many dangers on the road, and especially on highways, orange cones are simply not enough.

Many workers and industries benefit from proper education on work zone demarcation. These include emergency responders, cleanup crews, demolition crews, construction workers, and utility workers. Between 2011 and 2016, 532 workers were killed at road construction sites.

Learning work zone traffic safety protects these workers against being struck by moving vehicles, or having speeding vehicles unintentionally enter the work zone. There are four factors involved in properly implementing and labeling a work zone near major roadways.

As a preliminary step to setting up the construction work zone, proper signage should be instituted, particularly on highways. “Work Zone Ahead” signs warn drivers of upcoming traffic restrictions, and prepare them for any barricades or other signage up ahead.

Further signage when they finally approach the construction site should instruct them to slow down, and even denote the speed limit at which they should drive. “Do Not Enter”, “Reduced Speed Ahead”, and “Proceed with Caution” signs are highly effective in getting the point across to drivers.

Orange barrels, cones, drums, or barricades should be used to establish a perimeter. Otherwise, cars could get too close to workers or equipment. These devices should be used inside the work zone too, around ditches or other dangerous areas.

Larger projects may require larger barricades, while smaller road work can usually be delineated by cones. Cone bars should also be used between cones if the gaps between them are large. Generally, there should not be more than 20 feet between cones.

At night, illumination devices should be used. Flashing LED lights along signs will help bring attention to them. Flares and ground reflectors should also be used along barricades to make their presence stand out.

Lighting towers or illuminated arrows instructing traffic to move over or merge way are also essential. The Occupational Safety and Health Administration (OSHA) requires 5-foot candles or greater of lighting for workers and equipment operators that are on foot. This is especially necessary at flagging stations, as flaggers are most at-risk to be struck by a vehicle.

Having a flagger is perhaps the best prevention method for construction crews. Flaggers monitor traffic and help keep a steady flow, especially where only one lane is open, requiring traffic to funnel from both directions.

It’s essential for flaggers to wear high-visibility clothing or reflective vests. This allows the worker to be visible for 1,000 feet or more. Past the 1,000 foot mark, however, signs should denote that there is a flagger up ahead.

Furthermore, flaggers should be equipped with STOP/SLOW paddles, preferably with lights. This allows more effective communication with drivers, particularly where there is only a one-way funnel.

Construction site managers should make workers, especially flaggers, aware of the proper hand signals associated with traffic direction. They should also ensure the legitimacy of the signage they are using. Traffic control signage should always be fluorescent orange with black lettering.

Stop/slow paddles should contain a standard, octagonal, red “Stop” sign on one side and an orange/black-bordered “Slow” sign on the other. They should be at least 18 inches wide, with 6-inch high lettering. Flags, if used, should be a minimum of 24 inches and placed on a staff at least 36 inches high.

Too often, work zone traffic accidents occur because of improper warning to drivers and low-visibility. That’s why signage and barricades are not only crucial around the work zone, but in the quarter-mile leading up to it. Reflective garments should also be high-quality, and labeled as performance class 2 or 3, according to OSHA.

Roads are dangerous as is, and there’s no way to prevent against intoxicated or reckless drivers. That’s why, wherever there are controllable circumstances, traffic control workers should always find a way to optimize them.

Ellie Batchiyska is a writer for Advance Online, the first web-based training provider to be accepted by the OSHA Outreach Program for DOL OSHA completion cards.