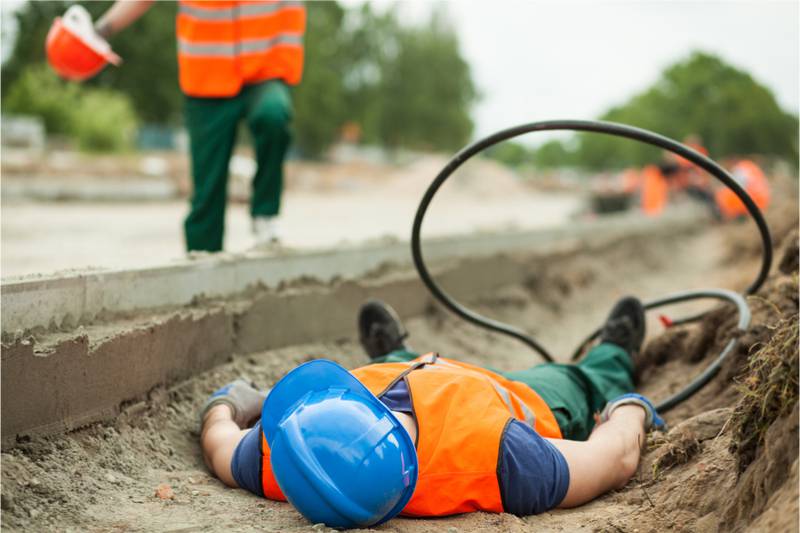 OSHA has determined that there are four main safety hazards, excluding transportation incidents, that account for a majority of all construction worker deaths each year on the jobsite. Dubbed the “Fatal Four” by OSHA, they include falls, electrocutions, being struck by objects, and getting caught in or between hazards. In 2016, 63.7% of all fatalities at construction sites were from one of OSHA’s Fatal Four.

According to OSHA, electrocution injuries accounted for 82 construction worker deaths in 2016, which is 8.3% of the 991 fatalities caused by construction site hazards.

Electrocution is death by electric shock caused by exposure to lethal amounts of electrical energy. Electricity flows through conductors like wires and power lines to create a path or complete a circuit. The human body acts as a conductor when they come into contact with an electrical current due to things like exposed electrical wires or damaged equipment.

Electrocution can occur from contact with power lines, contact with energized sources such as faulty equipment or exposed wires and improper extension cord usage. Both overhead and underground power lines carry a high voltage. The best way to avoid electrocution from power lines is to simply stay away from them.

Maintain a safe distance and be aware of the location of power lines to avoid accidental contact with heavy equipment, ladders, lifts, etc. If you must operate equipment such as cranes near power lines, contact the utility company to de-energize and ground the lines. When working around live power lines use nonconductive tools and equipment, avoid storing material underneath power lines and cordon off the area around power lines to the correct distance per OSHA guidelines.

OSHA has also established rules and regulations regarding ground-fault protection. Receptacle outlets that are not part of the permanent wiring of the structure must be protected with ground-fault circuit interrupters (GFCIs). A GFCI monitors the electrical current flow from hot to neutral and if it detects an imbalance it will trip the circuit in less than a second and cuts off the electricity.

Establish an assured equipment grounding conducting program that covers all cords, temporary receptacles, and equipment and maintain detailed records off all tests and inspections. Make sure all equipment and extension cords are in good condition by visually inspecting for cuts, frays or exposed bare wires and ensure that ground prongs haven’t been removed or become defective. Make sure that the equipment grounding conductor is electrically continuous by conducting a continuity test.

Most Cited Electrical Standards in Construction

Some of the most commonly cited construction standards by OSHA involving electrical hazards include:

In addition to electrocutions, electrical hazards can cause other accidents that can be fatal or lead to serious nonfatal injuries. These include burns, electrical shock, arc flash or blast, fire and explosions. Common causes for these other electricity related injuries include damaged equipment or faulty wiring, improper cord use, no GCFIs wet conditions, reversed polarity and lack of an assured grounding conductor program.